A conversation with naturalist John Green

John Green is a naturalist, birdwatcher, photographer and nature tour leader living in the Pioneer Valley of western Massachusetts. He’s been leading programs for the Hitchcock Center for the Environment and other environmental education organizations for almost five decades. As a fellow bird enthusiast and educator, I owe my foundation for bird song identification to John; he was my most formative birding mentor. He agreed to sit down with me this week as part of #BlackBirdersWeek for a conversation about his life and experiences as a birdwatcher and naturalist. 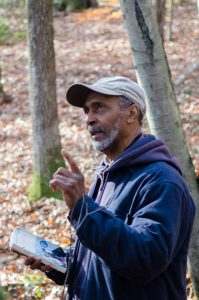 What role does birding and nature play in your life?

That’s an easy one. 100% of my life. I can’t see myself doing anything else. It’s my vocation, my avocation, everything.

Good question. Well I just got interested in being outside, and found out about Tinicum Marsh in Philadelphia near the international airport. Turns out there was an African American man who was the warden there named Jimmy Carroll. There was a bunch of older guys, not people of color, that hung out with Mr. Carroll, and they all took me under their wing. They told me about places like Hawk Mountain in Pennsylvania and the Brigantine and Bombay Hook National Wildlife Refuges in New Jersey and Delaware. Brigantine, near Atlantic City, really caught my attention. It was there that I eventually decided to take up nature photography, and I guess I was getting into birds, insects and flowers without really realizing it.

At this time I was working at a job at the US Forest Service outside of Philly, sitting at a desk, shuffling papers. I didn’t like it very much. Eventually I asked to be transferred to a different job and they offered me one at the field unit on the UMASS Amherst campus doing bird surveys. I thought to myself, I don’t know much about birds but it’s got to be better than shuffling papers, so I took the job. When you’re surveying birds in wooded areas you’re usually hearing more than seeing them, so I became proficient at birding by ear.

Who were your naturalist and birder role models?

I didn’t have a birder role model initially. While in the army in Alaska, I joined the National Audubon Society. When I returned to Philadelphia I joined the local Audubon chapter there, the Wyncote Audubon Society. When I’d go to meetings there, there was no one in that auditorium that looked like me. No one my age, either. That didn’t stop my interest.

When I was in the army at Fort Richardson, in Alaska, my father sent me newspaper articles from Philadelphia to keep me informed. On the back of one of those articles was an article about the Schyulkill Nature Center in Philadelphia that caught my attention. When I returned to Philadelphia I started hiking there, listing birds I saw and volunteering at clean-up days. I made friends with the education director of the center, Jean Milmine and her husband. They would have me over for dinner, and eventually they told me they thought I’d be a good naturalist. Years later I sent Jean my graduation notice to show her how far I’d come on the path she’d recommended for me. 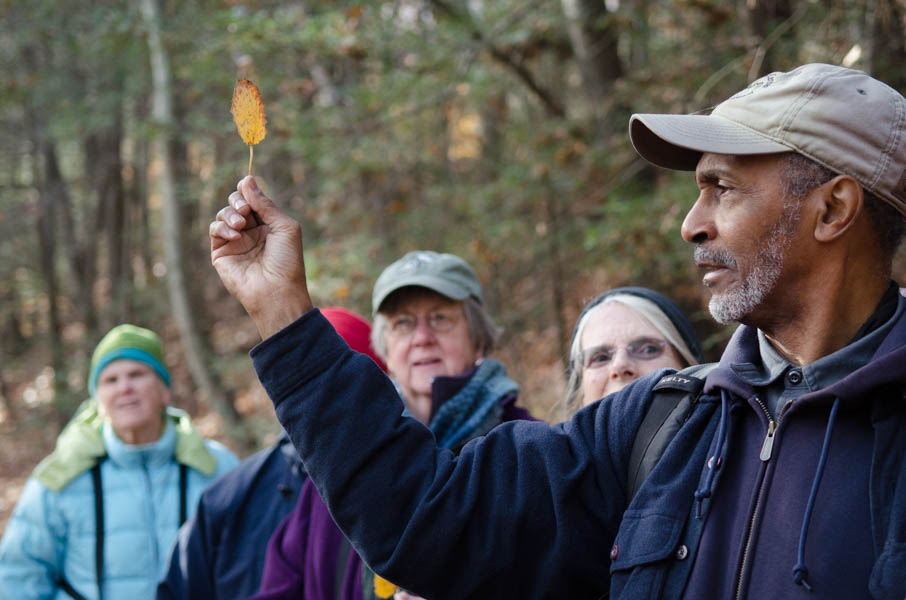 What is your favorite bird song and why?

The winter wren is one of the coolest. I remember leading a group at Rattlesnake Gutter and having two winter wrens calling back and forth. I thought that was the cat’s meow. I like other songsters, like the hermit thrush, but I’d have to go with winter wren.

Do you have an exciting or memorable first bird sighting?

I don’t know if I have a memorable first bird sighting, but I’ll never forget the morning I spent alone with gannets on Bonaventure Island off of southern Quebec. I was on a trip up there with two of my birding buddies. There was a movie being filmed on the island and the film crew was being ferried back and forth from Perce to the island. One day my friends decided to head to the island later in the morning, but I was at the dock at 6:00am. The captain of the boat, who I didn’t realize knew English, asked me, “Where are your buddies?” (He had seen us the previous day.)

“Are you going to the island?” he asked.

I was dumbstruck. He was offering to take me, one passenger, over to the island alone to visit the gannet colony. “Really?”

“I’m not doing anything,” he shrugged. “Just waiting for the film crews to get here.”

I couldn’t believe it. He took me around to the island. When we docked I asked him, “How much?”

Again, I was dumbstruck. “Thank you very much.”

When I stepped onto the island I almost started photographing wildflowers. Then I thought, “Wait a minute. I can do that later!” I spent 3-4 hours hanging out alone with the gannets. I was just standing there, kind of gaga. The colony is noisy and a little smelly and full of small flies. The gannets are nesting practically on top of each other, so whenever a new one returns to its nest, it disrupts them all and they make a lot of noise. There’s this constant baseline din. But every so often, I don’t know how to describe it, that noise level drops below that line, and it’s quieter. Not silent, but quieter. And I got to witness it. 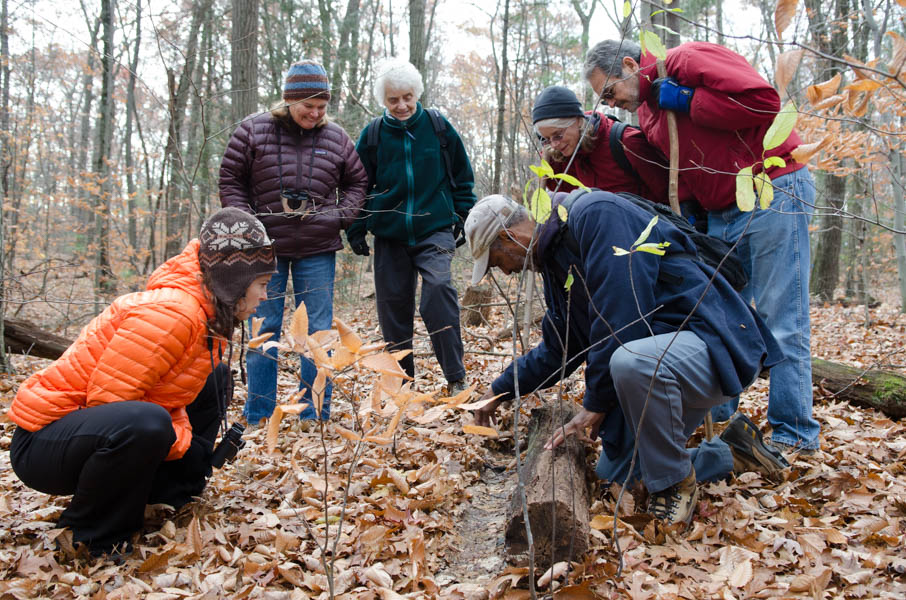 Not only do you have a knack for identifying birds by their songs, but you can imitate them with your whistle so well, it’s uncanny! Which came first, your whistling skills or your birding skills?

I started whistling as a youngster, but the bird whistling I developed as an adult birder. Years later my sister told me a story about my dad one day at the house hearing whistling and having no idea where it was coming from. He looked all over and finally found my mother whistling. So maybe I got it from her.

What advice would you give someone who wants to learn how to identify birds by ear?

There’s a couple ways you can practice. I like recordings. Birding by Ear is one of my favorite sources. I remember for the black throated blue warbler, the author says “Bur bur bur BEE” and I still have that in my head, years later, and it helps me distinguish it from the cerulean warbler. But nothing matches just being out here, listening.

Would you be willing to share an experience or two of birding as a black person?

The only difference that I would share is from my job at the Forest Service. I had to stand on different streets, at designated spots in Amherst for the bird surveys. So I’d be standing there with my binoculars, and I had the cops called on me a couple of times. On the one hand, it could have been because I was black, or maybe just because I was standing there near people’s houses with binoculars.

Leading walks is a different story. People show up for a scheduled walk, and I suppose some know I’m African American, and some don’t. I don’t always say I am the walk leader right away, and people think some black guy is joining the walk. I just stand there in the parking lot with my binoculars and start pointing out different bird songs. If anyone had any doubt that I was the leader it stops right there. 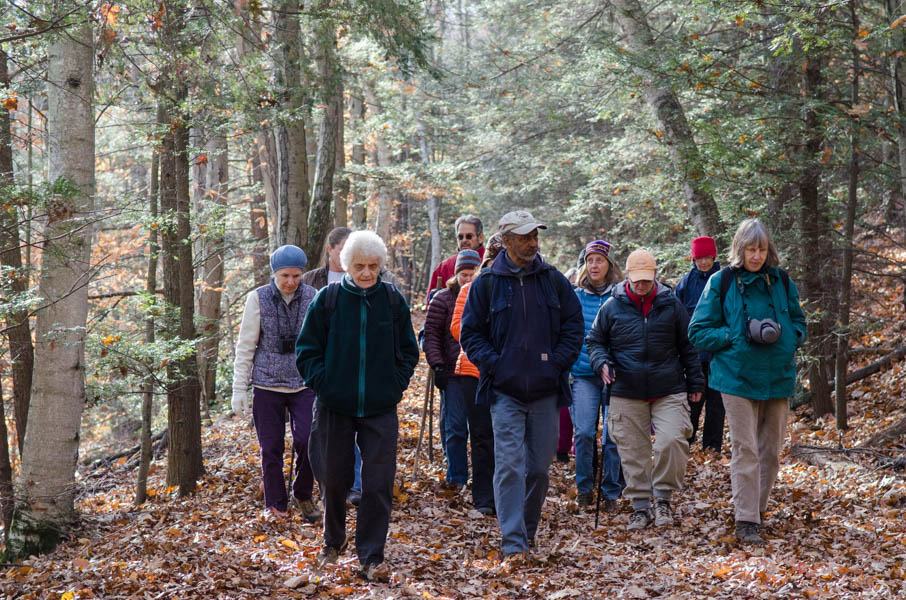 Have you faced obstacles as a black birder?

No, but I’ve noticed at my slide presentations that some audience members will look at me askance prior to the show, only to come up afterwards to ask me many questions about my photography.

I used to go birdwatching with people who weren’t so sensitive. People who wouldn’t hesitate to go up someone’s driveway to get a better look at a bird. I wouldn’t do that for obvious reasons.

There was a time with the Forest Service that I had to do vegetative studies in the residential neighborhoods in Amherst where we conducted the bird surveys. We were recording which vegetation was attracting which birds. My partner was a white woman, and we had to go knocking on doors to get permission to look in people’s backyards. One day my partner got tired of knocking on doors so she asked me to do it. The first house I went to, the woman who answered said sure, and we surveyed the yard. But by the time we got to the next house, the cops were there. The first woman had called the cops on me. Once it was sorted out who we were, she came over with lemonade as an apology, and I’m thinking no thank you.

I wised up and I made a list of all the dates and locations of our future bird surveys in Amherst, with the vehicle information and my supervisor’s name and phone number, and gave it to the police. They liked that, and police Chief Maia told me “John, if you have any problems, you let me know.” Despite that, there was an incident one day I was doing a survey across the street from his house. Probably the fifteenth time I’d stood there with my binoculars at that spot that year. A woman saunters out of her house, in her bathrobe with her coffee and says to me, “You’re going to be mad about what I just did.”

“I called the cops on you.”

What advice would you give a person of color who wants to enter the nature education field?

Do it. It’s so rewarding because there’s so many cool things to learn.

This interview has been edited and condensed.

10 responses to “A conversation with naturalist John Green”