It’s finally happening. After nearly three months of research, equipment purchases, and emails back and forth with experts the Hitchcock aquarium is fully operational. This has been an exciting project to work on, with multiple and varied topics and subtopics for me to become familiar with. My hope with this blog is to share what I’ve learned with you, and to keep you updated on what is happening with the aquarium as well as the other critters I take care of here at the Hitchcock Center.

My experience as an animal caretaker has largely focused on reptiles, invertebrates, and small mammals, so when our executive director asked me to set up a native species freshwater habitat for the new Hitchcock Center I was somewhat intimidated by the prospect. Fish are, literally and figuratively, a whole different animal, and aquaria in general are very different systems than any other captive environment. When your critter lives and breathes in the same nitrogen/oxygen atmosphere as you that’s one less variable you have to regulate. A critter that lives and breathes in water, however, is dependent on the regulation of several different components of the water. This means a whole host of special equipment, chemicals, and techniques that I had never used before. Today I’d like to focus one very important example of something I had to quickly learn all about: cycling your aquarium.

An aquarium in many ways resembles an ecosystem: it has biotic (organic) matter like bacteria, fish, and driftwood, as well as abiotic (non-organic) matter like gravel, artificial plants, and water. Unlike a natural ecosystem however, an aquarium is a system whose only inputs are sunlight and what people add to it. While it has limited inputs, the matter that is within it is certainly not static. The living things within it, through life processes like digestion, respiration and excretion, are altering the matter around them and its chemistry. When I add flake food most of it is eaten by the fish, which digest it and excrete waste. Part of their waste is the compound ammonia (NH3/NH4+), and as time passes the fish continue to add ammonia to the water. Uneaten food will eventually break down and add ammonia to the water as well. Because the aquarium is a relatively closed system the ammonia will continue to accumulate in the water (minus a negligible amount that off-gasses from the surface of the water), which is not good news when you consider that ammonia is toxic to most life.

We have a powerful canister filter that pumps 370 gallons of water per hour (our aquarium holds 125 gallons) through 3 types of filtration media and past a UV sterilizing light bulb, but none of that can take ammonia out of the water. So how do you keep the level of ammonia in the aquarium at healthy levels? With a biofilter.

The term biofilter refers to the colonies of bacteria that live in the filter and the gravel and process various compounds in the water. Bacteria of the genus nitrosomonas eat up the ammonia, and leave behind nitrite (NO2-). Nitrite is just as toxic as ammonia, so bacteria of another genus, nitrobacter, are there to gobble up the nitrite, leaving behind nitrate (NO3-). Nitrate isn’t nearly as toxic, but eventually enough can build up to be harmful, and the only way to mitigate this is through water changes. Part of the monthly maintenance of an aquarium is the removal of a quarter to a third of the water and replacing it with new water. 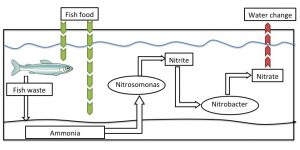 The friendly bacteria that process the toxic compounds ammonia and nitrite are actually located within the canister filter and the gravel. In this diagram, for simplicity, they are in the aquarium water.

A newly set up aquarium does not have a biofilter. Traditionally to establish one an aquarist would add a few fish (a source of ammonia) and wait a month or more for the bacteria to grow naturally, performing frequent water changes to mitigate the toxic build up of ammonia. Nowadays there are several products you can purchase at your local pet store that contain live samples of these types of bacteria. Adding them to your aquarium allows the biofilter to establish itself in a couple of weeks.

An aquarium is considered cycled when water chemistry tests show ammonia levels at 0ppm. The Hitchcock Center freshwater aquarium is currently in the process of cycling. The common shiners (Luxilus cornutus) that I added are producing ammonia as they consume the flake food I add, I’ve added the necessary bacteria to seed the biofilter, and I’m testing the chemistry daily, ready to do a water change if ammonia levels get too high before the biofilter grows.