Another summer camp season has come to an end, as well as another season of Leadership Training Camp (LTC). This year we had a fabulous group of 13-16 year-olds. All of them had participated in Hitchcock programs before, most of them had attended summer camp itself for years and were ready for the next step. 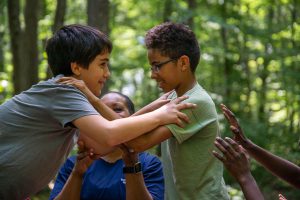 So what does it mean to be a leader? This is a question we ask of the LITs (Leaders in Training) every year.  This year one of our Spiral Three campers (more on this in the next paragraph) came up with a beautiful and succinct quote for us that became the biggest overarching theme of our two weeks together: “Put the group before yourself.” This is a concept that comes up again and again in the transition of our oldest campers to leaders in training, and to counselor in training. 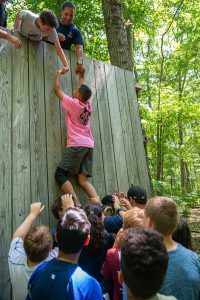 A special feature of this year’s camp was our “spiral” system. It’s our hope that campers at Leadership camp will return for multiple years. Campers who are attending Leadership Training Camp for the first time are called Spiral Ones. Campers who are returning for a second or third year are called Spiral Twos and Spiral Threes, respectively. Your spiral symbolizes your year and also the nonlinear path that our development as leaders may take. This year, spiral twos and threes (and one spiral four!) were often called upon to lead games and challenges for the group, as well as our overnight camping trip. Spiral ones were in charge of planning our day at Groff Park with the Eco-Investigators. 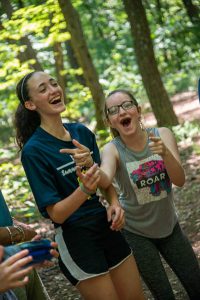 All Spirals were asked to lead one game or activity at some point during the session, as well as a “nature minute”. Nature minute takes place during morning circle and consists of several campers presenting individually about something in nature they learned about during the week. Some of the things campers researched were: Queen Anne’s lace, red-tailed hawks, willow trees, poison ivy, and toads. Peter and I are shameless bird and plant nerds so it’s one of our favorite parts of the day! Camper-led games are also always a huge hit. Campers introduced everything from the popular “Werewolf”, a sitting-down mystery game, to “Wah” a stand-up movement game, to Capture the Flag, to Dum Dum Da Da, a song Peter used to sing at Hitchcock camp in the 1970s! An important feature of having the LITs lead an activity is the debrief we hold afterwards. This gives the leader a chance to hear from the rest of the group what they did well, or could improve on, in leading an activity. 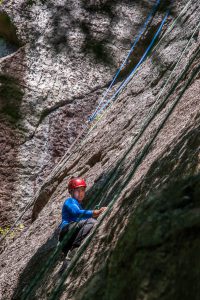 One conversation we had was about camp games: Can all these games we’re playing be played by all ages of campers? After all, we are here to learn how to lead younger campers. We agreed that no, many of these games were appropriate for only the oldest campers. So we made a point of learning and sharing games that are fun and apt for the youngest of campers, such as “Rhythm Detective” and “Yee Ha”. We aim to have Leaders in Training experience a blend of being a camper, playing games that are fun and challenging for their adolescent selves, and being a leader, thinking of what will be fun and safe for other, younger campers.

The transition from camper to leader is not easy and often takes years. Our goal as the instructors of LTC is to help the LITs understand their role as emerging leaders. In LTC, this means playing hard and participating fully, but also thinking about the bigger picture: the needs of the group.

We are very proud of this program. We see it as a bridge between camper and counselor in which young people grapple with important questions of what it means to be a leader: at camp, in school, or in life. It shows when our Counselors in Training (ages 13-14) and Junior Counselors (ages 15 and up) have gone through Leadership Training Camp – they have had the practice of putting the group first!