Biothon Celebrates the Creatures Around Us

It’s a rite of Spring in the Pioneer Valley, when hordes of nature enthusiasts emerge from their hibernation and scout out the living world around them: Biothon! Biothon is a great fundraiser for the Hitchcock Center, and an entertaining and educational event for all ages.

In 2016, the 17th annual Biothon will happen during the second weekend of May and the first weekend in June. We’re spreading out the fun this year so that we can catch peak bird migrations, document the blooming of hundreds of plant species, and marvel at the activities of everything from ants to moose. You don’t have to be an expert; just bring your enthusiasm and curiosity about the natural world. Kids and families appreciate how much they learn by exploring new places and by bringing a new eye to the diversity of life around them; each year, youth teams from several schools and towns join in and find dozens of species.

Here’s how Biothon works. People form teams, headed by an experienced naturalist or two. The idea is to go to a favorite natural area where lots of species of plants, animals, fungi, insects, and other critters might be found. Teams recruit a cohort of people who are willing to bid on the total number of species found during the foray. Bidders can pledge on a species-by-species basis (a penny, a dollar, or any amount per species), or donate a fixed total amount. Members of the Hitchcock staff and board help with fundraising for pledges; team leaders and members are encouraged to recruit friends and family to bid on species or join in the fun. It’s never been easier to donate—you can do it right online at the Hitchcock Center website.

At the end of the field trip, teams tally up the species they have seen and send their lists in to the Hitchcock Center. Prizes are offered for the teams that have seen the most species or have raised the most funds. At the same time, teams contribute valuable data on the species present in the natural areas around the region. Last year’s Biothon raised a whopping $17,000 to support the Center’s many great programs. Let’s do even better this year! 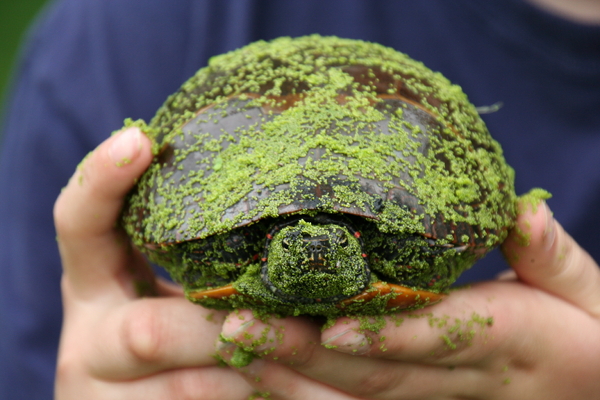 Many amateur and professional naturalists have been participating in the Biothon for years, and keep returning—both for the new discoveries and the sheer comraderie. Elizabeth Farnsworth, who teamed up for forays to Mount Tom and Mount Warner in 2015 that counted nearly 400 species, says, “It’s great to get outdoors with friends and to be amazed at the incredible variety of organisms you can find in a few hours. We even found some species previously unknown in the county!” Biothon founder, David Spector, says, “If I had to pick only one highlight, it would be encountering and sharing with other naturalists in the field and hearing about interesting sightings from other teams.”

Join the fun! Visit the Hitchcock Center’s website or call Development Coordinator Marcus Simon at 413-256-6006 to learn more. Team leaders should sign up by May 1.

Elizabeth Farnsworth is a Senior Research Ecologist with the New England Wild Flower Society (NEWFS), and a biologist, educator, and scientific illustrator. She is also Editor-in-Chief of the botanical journal, Rhodora. She is currently principal investigator on a National Science Foundation-funded project to develop an on-line guide to the regional flora for teaching botany. She previously coordinated NEWFS planning for the conservation and management of over 100 species of rare plants. She has illustrated the forthcoming Flora of New England for NEWFS and the Natural Communities of New Hampshire with the NH Natural Heritage Bureau, and is currently illustrating and co-writing The Ants of New England (Yale University Press). She is co-author of the Connecticut River Boating Guide: Source to Sea and the Peterson Field Guide to the Ferns. She is a member of the graduate faculties of the University of Massachusetts at Amherst and the University of Rhode Island, a Master Teacher at the Conway School of Landscape Design, and has taught at Smith College and Hampshire College.