Salamander Work for All Ages 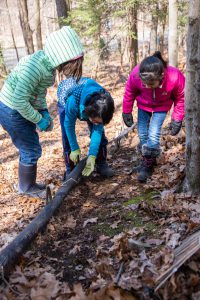 Every year after the first spring rains in Amherst, volunteer “bucket brigades” used to stop traffic along Henry Street to carry migrating spotted salamanders safely across the road on Big Night – the first rainy night about 40 degrees in the spring. That’s why the Henry Street salamander tunnels in North Amherst were constructed. The first of their kind in the nation, these structures (just south of the junction with Pine Street) were installed in 1987 by the Town of Amherst’s Public Works Department with the cooperation of Cowls Lumber (the landowner), and the aid of the Massachusetts Audubon Society, the Fauna and Flora Preservation Society, the Hitchcock Center for the Environment and many volunteers. 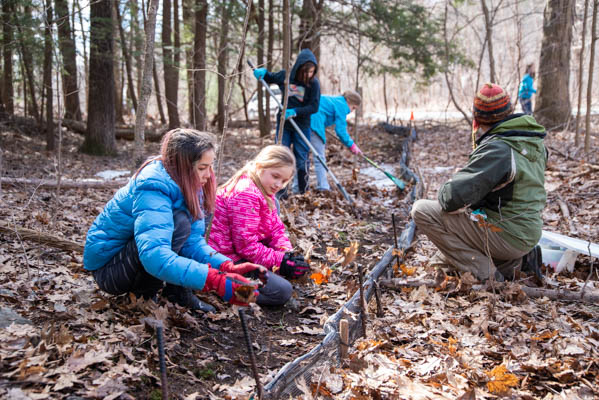 The Hitchcock Center and a large cohort of volunteers from the area, have been attending to these tunnels ever since. This year, the Hitchcock Center’s Homeschool II class of twelve 9-12 year olds took their learning to the tunnels. In mid-March they learned about the Spotted Salamanders and their migration and mating habits from Environmental Educator Ted Watt and Homeschool Instructor Jeff Mazur. The group also ventured to the tunnels to do the annual required clean up. They raked out the tunnels with an extendable hoe made of rebar. They removed leaves and debris from the fencing, which is designed to direct the salamanders to the tunnels. And they did a general clean up of the area, removing multiple garbage bags worth of trash. 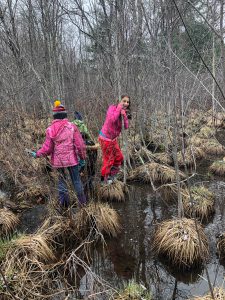 The Homeschool II class theme for the spring was citizen science and the students were excited to take part in the long term collection of data for the egg mass counts. Citizen science projects, like this, allow people to work collaboratively with scientists to gathering scientific data, to help increase scientific knowledge, greatly increasing the number of observations made.

“Big Night” itself was more of a series of little nights this year. With the weather being so cold, and rains intermittent, there were smaller movements over the course of multiple nights, rather than one big night. There were more than 30 volunteers who attended an evening training for big night. Then those who were available answered the call each of the many nights when a migration was possible. 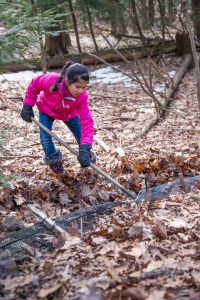 In early April, the Homeschool II class, along with some other intrepid salamander lovers from the public, ventured into the swampy waters on the western side of Henry Street to count salamander egg masses. An amazing adventure was had by all, trying to navigate the tussock sedges and not fall into the cold waters. While looking for spotted salamander egg masses the only sign we found of the animals were spermatophores, sperm packets deposited on the pond bottom by males to be chosen by the female salamanders. Our group also found an abundance of wood frog egg masses. We are unsure if we were too early to look for the egg masses, due to the colder than average weather, or if there were none to be found, because of the adverse conditions.

The Hitchcock Center and its avid salamander volunteers will be performing work this fall to improve the fencing around Henry Street to improve the salamander tunnel set up. If you are interested in assisting, please email Ted Watt.