From Fear to Confidence: Protecting Against Tick-Borne Illnesses 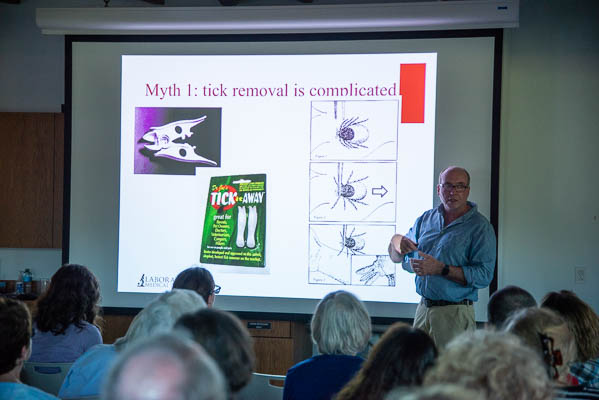 On April 9th forty environmental and outdoor educators gathered at the Hitchcock Center for a day-long professional training on ticks and tick-borne diseases. All the participants, in one way or another, take young people and adults and a wide variety of audiences outdoors for learning, for experiences, and for fun! And we seek to increase others’ comfort and safety in the outdoors. So it seemed natural for us to learn as much as we could about these critters so we can educate our audiences about how to stay safe and avoid being bitten.

We began the day learning about the biology of the 3 tick species that we have in New England. Ted Watt from our staff presented images and information about the 3:

How to distinguish the various tick life stages was part of his talk as well as learning which stages bite and which stages carry which disease organisms. We studied the 2-year life cycle of the deer tick as we have it in New England.

After Ted presented some basic tick biology and natural history, Steve Rich, Professor of Microbiology and Director of the Laboratory of Medical Zoology at UMASS presented more detailed information about ticks and some of the research that he and his team have been carrying out. His lab has tested over 45,000 ticks since 2006. He has studied and mapped out the geography of occurrences of tick-borne bacterial, protozoan and viral diseases. Through the testing of deer, wood and lone star ticks the records from the UMASS lab have produced some very interesting patterns.

During the day we shared some tick informational games and activities that we have developed for some of our younger learners. We had sample ticks to view under a microscope. And we shared some print and internet resources to consult for more information. The best internet site for detailed information about ticks and avoiding tick bites is the University of Rhode Island’s Tick Encounter. We closed our day with working groups discussing and planning how to reach out to their audiences with up-to-date information.

As a sample activity for young people we shared one of the Hitchcock Center contests that we started during the summer of 2017. The contest was organized between the different sessions of our summer camp to see which group could find the most ticks on them. We captured the ticks, secured them in a strip of scotch tape, and stuck them on a poster with the name of the camper who discovered it. The session with the most ticks received the tick medal. Our goal here is to foster attitude changes in young people, to try and decrease some of the paralysis and fear that ticks bring out in many of us. We train young people how to identify the various species and remind all of us to keep eyes out for the little crawling arachnids whenever we have been outside. It has minimized tick bites for sure and changed how our campers view the creatures.

Here are some of the things we learned during the day of training:

We at the Hitchcock Center are very concerned about ticks and tick-borne disease. We urge all residents to stay informed about current developments. And to check, check, check themselves for ticks. The sooner you remove them after they bite, the smaller chance they have of transmitting disease!

The Hitchcock Center offered a similar course for the public on June 25th.