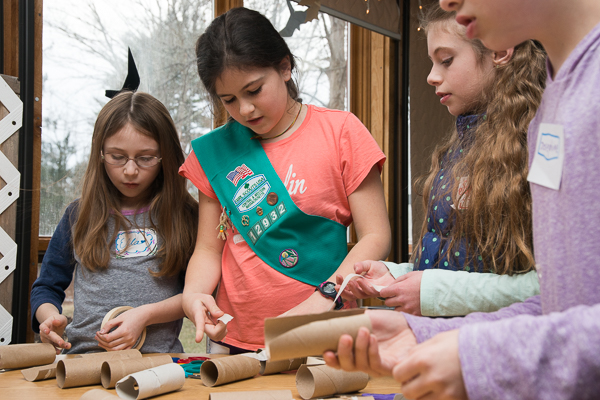 It’s a contraption that attempts to complete a simple task in the most complicated way possible. Named for Reuben Goldberg, a cartoonist and inventor in the early 20th century, these devices are usually highly complex, involving a series of chain reactions set off by one initial human motion. Rube Goldberg machines can be built to accomplish simple everyday tasks, such as turning on a light, zipping a zipper, or even pulling a tooth! 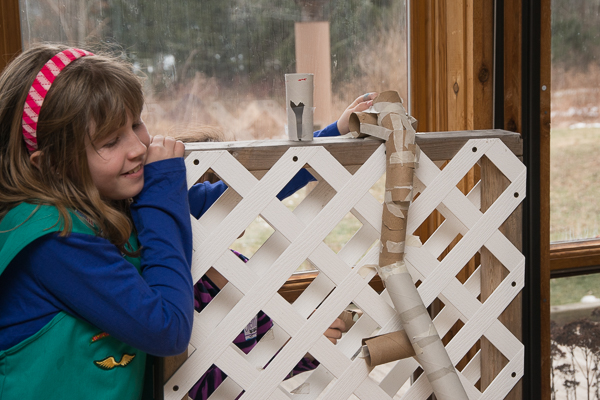 At the Girl Scout program we appreciated how challenging it can be to put together a machine made up of a series of chain reactions. To warm up, we watched a short video of kinetic artist Joseph Herscher, who specializes in Rube Goldberg machines. On Sesame Street, he created a large outdoor contraption that watered a plant, using common items such as a tire, clothes hangers, and a rake. Then we did our first Rube Goldberg challenge, building a marble run using only toilet paper tubes and masking tape. Each team had to use at least 30 tubes and their run had to have horizontal, vertical and diagonal parts. It turned out to be quite challenging to get the marble to pass through all those twists and turns! Girls found they had to think like engineers; it took working together, listening to everyone’s ideas, and delegating jobs. It was all about trial and error! 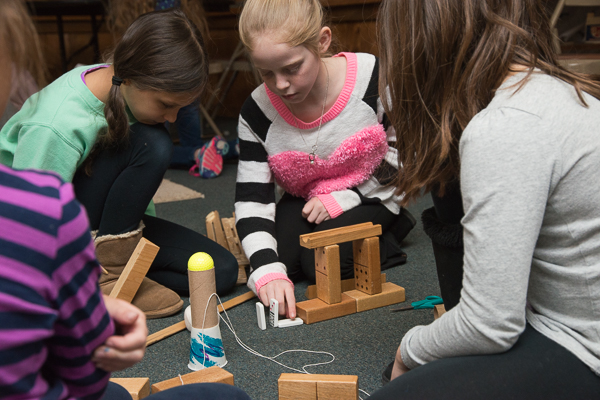 After the challenge we took a moment to consider how nature itself is a brilliant engineer. We introduced the concept of biomimicry, which is the practice of humans looking to nature for inspiration to make better inventions. The classic example is how Velcro mimics sticky burdock seeds. In a matching activity, we considered lots of others, such as how a parachute is like a dandelion seed, how train cars are like millipede’s body segments, and how a suit of armor is like an armadillo’s armor or a turtle’s shell. Turns out nature thought of a lot of these great ideas before humans ever did! 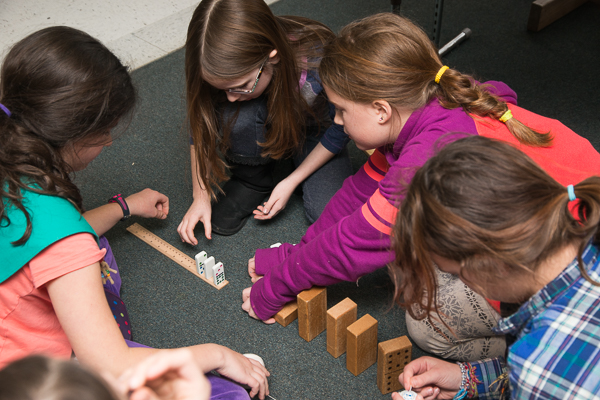 For our second Rube Goldberg challenge, teams had to build a Rube Goldberg machine. The task: move a ping pong ball across a horizontal surface at least six inches. Sounds easy right? The requirements were that it had to involve at least 5 steps and use the following materials: string, a cup, 10 small dominoes and 5 large dominoes, 5 wooden blocks, 3 cardboard tubes, a ruler and a golf ball. Teams could use more steps and more materials than this, but not less. Again, it was all about trial and error. The ideas were so creative! Some groups made pendulums, others started on a table and cascaded onto the floor; one even began at the ceiling! The most inventive ideas didn’t always translate into a successful step; sometimes the pendulum didn’t swing the way they thought it would, or the dominoes didn’t quite fall right. But with lots of tweaking and new ideas, they were able to get their machines to do what they wanted. Many groups succeeded in the challenge by using lots of teamwork, creative ideas and persistence. 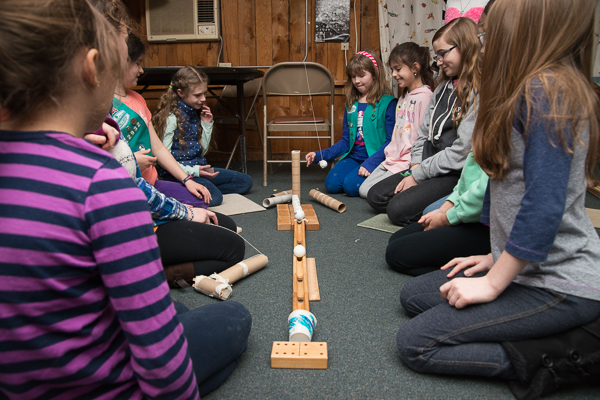