This past spring, Pete Westover offered a great overview of environmental justice issues in New England followed by a program featuring the important environment justice work of The Conservation Law Fund. 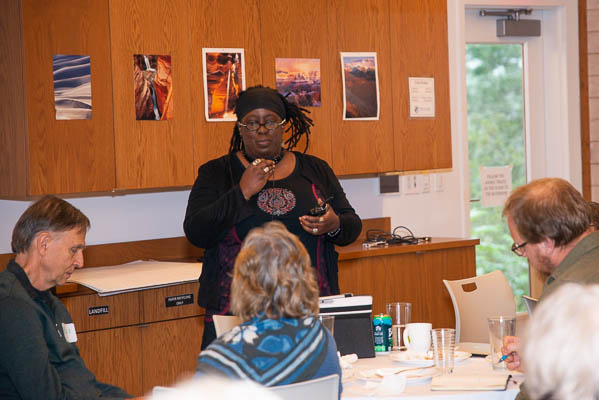 Jacqueline Patterson, the Director of the NAACP Environmental and Climate Justice Program, speaks at the Hitchcock Center.

In September, with the help from a grant to Hampshire College from the Roddenberry Foundation, we were able to bring Jacqueline Patterson, the Director of the NAACP Environmental and Climate Justice Program, to our region. Jacqueline drew over 140 people to an evening lecture and another 40 people at a luncheon the following day to showcase how the NAACP was strengthening its focus on climate change and its disproportionate impacts on communities of color.

She helped us all understand the mission of their program which states the following:

Environmental injustice, including the proliferation of climate change, has a disproportionate impact on communities of color and low income communities in the United States and around the world. The NAACP Environmental and Climate Justice Program was created to support community leadership in addressing this human and civil rights issue. In the past, and to some extent still now, when people think of environmentalism, they often think of saving the whales or hugging trees! When folks think about climate change, what often comes to mind are melting ice caps and suffering polar bears. Historically, American society has failed to make the connection in terms of the direct impact of environmental injustices, including climate change, on our own lives, families, and communities, all of whom depend on the physical environment and its bounty. Toxic facilities, like coal fired power plants and incinerators, emit mercury, arsenic, lead, and other contaminants into the water, food, and lungs of communities. Many of these same facilities also emit carbon dioxide and methane – the #1 and #2 drivers of climate change. At the same time not all are equally impacted. For example, race – even more than class – is the number one indicator for the placement of toxic facilities in this country. And communities of color and low income communities are often the hardest hit by climate change.

Most recently we had local organizers Susan Therberge of Climate Action Now, Jacqui Velez of Neighbor to Neighbor in Holyoke and Dr. Marty Nathan speak. They are all leaders in the Columbia Gas Resistance Coalition. The hours and dedication of each of these women to fight climate justice locally was inspiring. Susan and Marty spoke of being long time climate activists who now recognize that climate work is social justice work, that the two cannot be separated. They emphasized that the communities most impacted and vulnerable, the frontline communities which are more predominantly poor people and people of color, must be the leaders of these movements, Jacqui spoke about becoming a climate activist when she learned about and confronted the connections between her kids’ health and neighbors’ health and environmental issues.

Upcoming on Wednesday, December 5th at 7pm we will have a panel consisting of Ellen Story, Clare Higgins and Jo Comerford discussing current Environmental Justice Legislation and Initiatives.