Editor’s Note: The Hitchcock Center invited James, Sydney, and Saliim to speak at the Salamander Sunday Brunch, a friend-raising event held annually each fall. All three attended Leadership Training Camp offered for two weeks each summer. Founded in 2014 by instructors Katie Koerten and Peter Lamdin, the camp helps lead 11 – 13 year-olds through a series of activities and challenges aimed at learning leadership and teamwork skills with a goal of preparing these future leaders for being junior counselors at Hitchcock, or other summer camp programs, and hopefully also for being leaders in other group situations they might find themselves in. The following is what each shared with our guests, during their presentation, at the brunch. Minor edits have been made for clarity.

Hi everyone, I’m James. I’ve been going to the Hitchcock Center since I was 4, the camps since I was 6, and specifically the Leadership Training Camp for the last 4 years now. After that I have now done 2 years of CITing [Counselor in Training], with both the 5 through 7 age group and this past summer, with the 7 through 9 age group. As the name of the camp really says it all. Leadership Training Camp. It is a place where you learn to lead, and push yourself outside of your comfort zone while incorporating nature and encouraging outdoor adventure. It is run by the Hitchcock Center for the Environment after all…We participate in group activities such as ropes courses and rock climbing, especially for people who are afraid of heights, it provides people with a safe environment to stretch their limits. It also gives people the chance to learn the skills that a good leader has. These are skills which they will be able to use in other aspects of life such as applying for jobs, colleges, or just generally being a better member of the community. After being a CIT for the camp itself, I can truly tell you that the skills I learned in the Leaders in Training Program were useful in allowing me to effectively lead and be of a greater use to the counselors. One of the most useful of these skills was being able to prevent or at the least settle disagreements. For me personally, watching people challenge themselves and push their limits is really great, especially when they achieve their goal.

For me personally, Leadership Training Camp has really allowed me to take on more of a leader type role in other situations/scenarios. When I play sports like soccer it allows me to better help the team accomplish our goals, due to having a better understanding of how to help people do so. When we have group assignments in school, I am often able to take on a leading role and organize our group efficiently and effectively based on our skill sets. It allows me to be able to have others be both more confident in themselves, and more successful at their tasks. Knowing how to lead really translates well into really any aspect of life, and the Leadership Training Camp really boosts these. 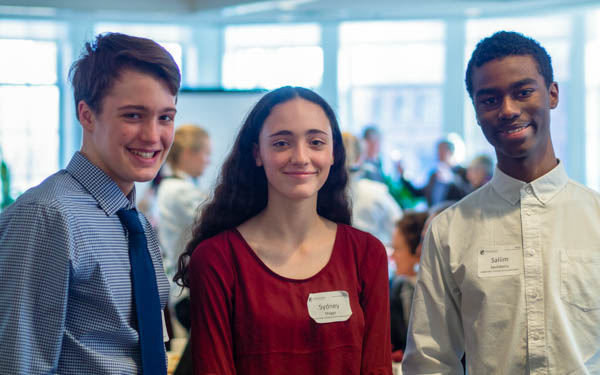 Hi, I’m Sydney. I’ve been going to Hitchcock Center for almost 9 years now, and to the leadership program since I was 11 (so only for 2 years). I’ve been CITing at the camps for the last year as well. So yeah, we each have to lead a game for everyone else, and explain exactly how. Everyone in the camp has to at some point, even if there are people who are feeling unsure or don’t know how to. The good thing is, that the spiral 2s & 3s [2nd and 3rd year participants] always go first, to give a good example of how to do it. This way, even the people who are not so confident can be able to watch others and learn how, and gain the confidence to be able to. I know that this especially has helped me outside of this camp. When the first time you learn how to do something is in a community that you know is supporting you, it makes it a lot easier to do again and again because they build up your confidence. So for me, having that confidence really helps in school, whether it’s presenting something to the class or singing in front of the whole school. Knowing that you have the ability is half the battle.

Leadership Training Camp really has been a great experience for me, and I believe for everyone else who takes part. Most of this we can attribute to our amazing counselors, Katie and Peter, but a large part of it comes from the participants. Everyone who comes to this camp contributes their knowledge, ideas and other stuff to help with the activities and make the whole camp run smoothly. It is also the first time, for many campers, that more responsibility is placed on each person in making sure everyone is having a good time, pushing their limits, and grows. The goal mostly, is that everyone learns something, about the group, or themselves. If not even learning something, then at least everyone is participating. And the thing I think that makes this camp so different is that it’s not all about learning from the counselors. Even just by watching the other campers everyone learns so much. It’s not someone instructing you on how specifically to do a thing, it’s watching someone with a similar skill set to you do the same thing, and learning from them. That’s what this camp is all about- growing, by learning from each other.

Hello my name is Saliim and I’ve been going to the Hitchcock leadership camp for 2 years and I’ve been CITing for the Summer Camp for 2 years as well. I think the leadership camp goes over and teaches many great skills but it’s how they execute teaching these skills that’s one of the best parts about the camp. One of the tools they use are called Spiral’s. The Spiral System is one where the more years you attend the leadership camp the higher spiral you are, so one would be spiral one and so forth. The higher spiral level you are the more responsibility is placed on your shoulders. For example, if you were a spiral two you might lead a game or teach a song to the rest of the group before all of the spiral ones. This allows people who are possibly less experienced in a leadership role to see someone do what they would be doing. This results in a sort of foundation of technique being created that allows others to pick and choose what they want to take with them from prior leaders who went before them. For me personally, I had been a CIT at many different camps but I felt as though I needed something more or could be doing something more and while at the leadership camp I was able to feel more comfortable overall in taking more of a leadership role when it came to games or entertainment in general. By building a foundation, the camp improved my leadership skills and gave insight to new ones that are good for life in general.

So when taking these skills into real life practice the best example I can think of for myself is school. There are many situations in school where a leadership role is beneficial and one of those situations I find myself in on a daily basis is gym class. Certain activities are easier with someone helping to guide but it’s also good as a leader to know when to let the whole group lead or step aside and let another person lead. To this extent the leadership camp has influenced my daily life and in more than just one way as the overall skill of leadership can be used in many varying life scenarios.