How many birds do you really have at your feeder? The short answer is it’s very hard to know. Most of us (including me) will keep a species list of what shows up at the feeding station and try and ascertain how many of each species there is. The easiest and only way to do this is keep a tally during the day. For example, at 8:00AM you may have 2 Downy Woodpeckers, 4 Black-capped Chickadees, 2 Tufted Titmouse, 6 American Goldfinch, 6 Blue Jays, etc. You check in a couple hours later and now you have 4 Downy Woodpeckers, 6 Black-capped Chickadees, 3 Tufted Titmouse, 4 American Goldfinches, and 3 Blue Jays and so on throughout the day. At the end of your observation period you take the highest number of each species for the day and you have your high count for that species. This is pretty much the only way to do it, and it’s fun to look back over the years and see what some of the high counts have been and on what date. So, when keeping your list, remember to not only keep a species list and numbers, but remember to enter the date!

A few years back I had 36 Blue Jays descend upon the bird feeders early one morning in May, that’s right 36 Blue Jays all at once! They were on the feeders, on the ground, everywhere, but I was able to count them and that certainly was my high count for the day! However, I had Blue Jays in much more modest numbers throughout that day, and wondered if these were just the remnants of the massive flock that hit my feeders in the early morning or could they have been a completely new group of Blue Jays that were just arriving into the area from migrating? I’ll never know. 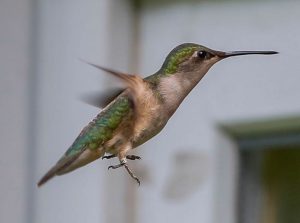 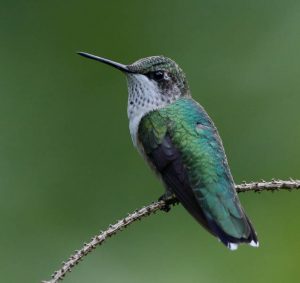 Over the last several years they have had a certified Hummingbird Bander come in for a morning in early August and band the Hummingbirds in their yard. To capture a Hummingbird, they use a cage and place a hummingbird feeder inside, once the hummingbird goes in for a drink, the trap door is released and captures the bird. I’ve seen this over the years and trust me, it’s a lot easier said than done, as these little guys are quite fast. When a Hummingbird is banded, its weighed, sexed, measured and have a tiny, tiny, leg band placed on the bird.  All this information is entered into a date base and in the event the bird is re-captured the researcher can look it up and find where and when this bird was banded. This year’s results were amazing. In a half day operation, they captured 94 Ruby-throated Hummingbirds! 87 were new captures with 7 re-captures from previous years. One of the seven previously banded Ruby-throats was a female that they banded at this location in Whately 8 years earlier! 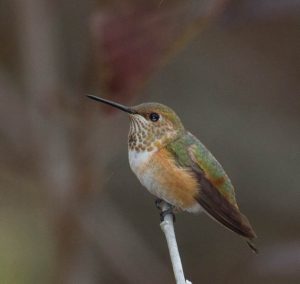 So August is the month when Hummingbird activity is at its peak and by mid-September it starts to drop off noticeably as most (but not all) make their way to their wintering grounds in Mexico and Central America.  However, if you do have a hummingbird holding on or recently showing up in October, then it could get more interesting. This is the time of year, historically that the western vagrants tend to show up in Massachusetts. Chances are it’s just a late lingering Ruby-throated Hummingbird, but you never know. If you have a late Hummingbird show up and would like someone to take a look at it, call the Hitchcock Center and they’ll get in contact with me.

Until next time……Keep those binoculars handy.

Sunday Birding with Scott is published irregularly on Sundays.

One response to “How Many Birds?”