By Katie Koerten and Peter Lamdin 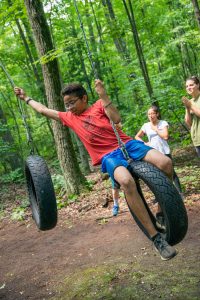 “That was really hard, and made me nervous, but I’m really glad that I did it. There were a lot of things to think about!” – Leader in Training after leading a group challenge

The Hitchcock Center’s Leadership Training Camp (LTC) just had its sixth summer. Created in 2014, its mission is to grow leadership skills in an immersive outdoor setting. The result has been six years of campers who are increasingly comfortable taking risks in the outdoors and providing their peers with constructive leadership feedback. One of Hitchcock’s most popular summer camp programs, LTC feels like it gets better each year. Much of its strength and success comes from the campers themselves.

Each year, we work to push the edges of our comfort zones through group challenges, rock climbing, a ropes course, and an overnight camping trip with a night hike. Over the course of the three years campers can participate in this program, we increase what’s expected of them; by year three, a Leader in Training should be ready to be called upon to lead a game or song, explain the rationale for an activity, or offer their constructive feedback for a peer. Readiness looks different for every camper, but this is generally what we ask of them. 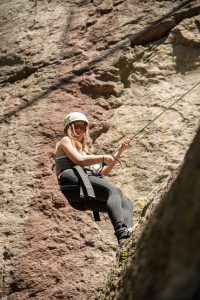 In 2017, we designed the “Spiral” leadership model, with lots of input from that year’s campers. Spirals correspond to how many years you’ve been at the camp, so a Spiral 1 is in their first year, Spiral 2 is in the second year, and Spiral 3 in the 3rd year. Expectations for each Spiral gradually increase, with Spiral 2s and 3s taking on more responsibility and jumping in to leading activities more quickly. When campers return for a second or third year, their abilities as leaders grow and provide an example for those in their first year. We genuinely hope that all campers participate for all three years to get the most out of it for themselves, and to help lead others.

Though the structure of the camp has changed a little bit over the years, one thing has been constant: camper-led activities followed by a thoughtful debrief of how they went. It is a powerful part of the camp, both for the counselors and the campers. We all get to experience each camper step up to teach a game, a song, or a complicated group challenge. Some Leaders in Training are shy and generally quiet, some have never considered themselves leaders, and some are quite comfortable speaking up and jumping in to a leadership role, but need to realize that sometimes a leader cannot also be a full participant in the activity being led. Afterwards each camper has the opportunity to thoughtfully reflect upon, and provide feedback on the activity. A culture of respect and safety is formed, one in which we can truly be ourselves and have fun. 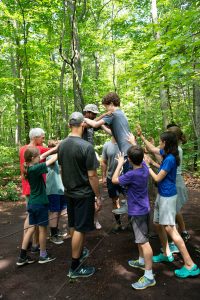 By Spiral 3, the Leaders in Training have become stronger environmental educators, sharing about nature and leading activities in the outdoors. In addition, we are hearing back from our campers that the skills they have gained at camp have helped them to be leaders in other areas as well: at school, in a dance group, on a sports team, or just with a group of friends.  We hoped that would be true, but it was up to our leaders to make it happen. We already can’t wait for LTC 2020!