Editor’s Note: This blog post is a part of the Hitchcock Center’s Youth Voices for the Environment. Through our Western MA Youth Climate Summit and other methods, we are educating and empowering youth to take action in their communities. For this post and this post, we interviewed two Western MA Youth Climate Strike organizers to learn more about what it is like to help organize this historic movement and actions to support change.

1) What is your role in the MA Climate Strike?

I was one of the organizers of the March 15th strike. We didn’t have official titles as we were organizing the strike while studying and often depended on collaboration on all fronts to do what was necessary.

2) What led you to decide to participate in the MA Climate Strike? 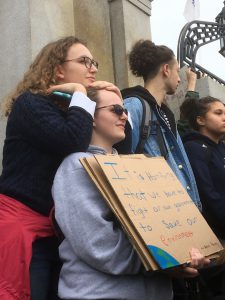 I was honestly fed up with inaction by adults. Our elected officials have largely refused to recognize the climate crisis, and when some do choose to acknowledge climate change, they often do so with a comfortable, though inaccurate timeframe. A lot of scientists, teachers and otherwise well-meaning adults encourage me to study this stuff in college, and hopefully I could bring about change in my future career. I don’t have the time to do that. We need systemic change now in order to stop the kids who are scared to death of climate change.

3) What do you hope to accomplish with the MA Climate Strike?

As much as I want legislators to act immediately to take aggressive action against climate change and the industries and CEOs that perpetrate it, I feel this strike was also about gaining the attention of other students and adults. We need even more youth to unite with us in this movement. As Greta Thunberg said of the March 15th strike “This is the beginning of the beginning.”

4) Where have you found the most support for organizing the strike?

I have found immense support form organizations like the Sunrise Movement, Women Working for Oceans, and students around may age who feel inspired by youth mobilization.

5) As a student, what challenges do you face in organizing a statewide strike?

How to communicate across a state and organize a event that is the culmination of our vision. It’s really difficult to do when you’re going to school, but we dedicated an amazing amount of time to this strike.

6) Have you been able to work with other students across the state or only with students at your school or in your community?

Students from across the state have worked on this! We worked on online workspaces, Google Docs, and a lot of conference calls. I’m incredibly proud of how collaborative this was.

7) You participated in the Western Mass Youth Climate Summit hosted by the Hitchcock Center for the Environment and Mass Audubon’s Arcadia Sanctuary. Where there take-aways from the Summit that have influenced you and your work? OR Was there a particularly influential moment in your life, or a series of events, that really provided the call to action for you be passionate about climate action and organizing the strike?

There wasn’t one pivotal moment, I just got tired of not seeing action. Rather than get depressed, I decided to join the fight because I do not see another option.

8) What reactions have you received from fellow students and others as a result of your work? Has it all been positive, or have you encountered opposing perspectives?

I wish it were all positive, too many misunderstand how dire the situation is. Too many people frame it as “skipping school” when we are deliberately striking to raise awareness and force systemic change. However, there are many people who are open to a conversation.

9) We know there are students whose parents/family/caregivers or teachers/schools may not support the strike. Why do you think it’s important that students participate? What kind of support has helped you to take a leadership role?

I do not understand how teachers can tell us to aspire for a job in field when we do not listen to those already in the field. The most brilliant scientists in the world have been warning us of climate change for decades, and the younger students now don’t even have the time to join them. So, we must join the fight now, as students. My parents and sister have been incredibly supportive, they have driven me around to meetings and calmed me down from the inevitable stress. Their support has             allowed me to be a leader in this movement.

10) For you, what was the most successful and inspiring part of participating the MA Climate Strike?

I saw so many young kids there, holding signs much bigger then them and joining their older peers in chants. The younger kids also asked some of the most hard-hitting questions in the town hall. They are the reason for this movement, and their involvement in it was the most inspiring part.

11) There may be students who are hesitant to participate in a strike. What would your advice to them be?

Don’t hesitate, I promise it is not as scary as you may think it is. There is not one type of person who can attend this strike, it is a diverse and welcoming movement, and I invite you to see that for yourself.

12) What are your immediate reflections on participating in the Climate Strike?

I can’t believe we pulled it off. The pride I feel for my fellow organizers in the state and across the world is immeasurable, and I cannot wait for the upcoming events.