Plants: Eat or Be Eaten! 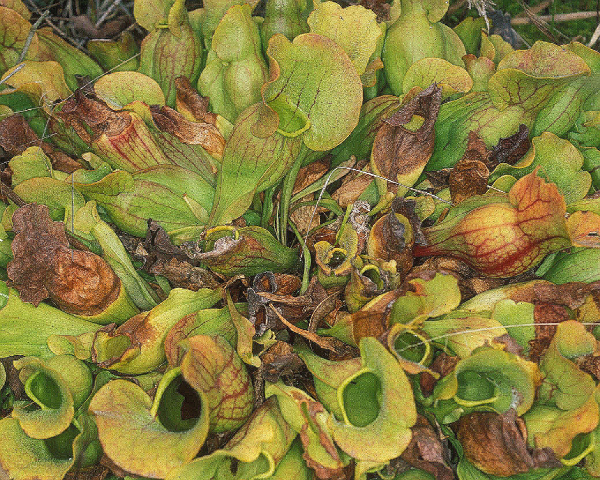 We mostly think of plants as well-behaved, passive creatures, rooted in one place and hoping quietly that sun and soil will provide them what they need in life. But we’d be wrong! Plants actively shape their habitats, communicate with each other, conspire against predators, and sometimes become predators themselves.

On Saturday, January 16, 2016, Elizabeth Farnsworth (Senior Research Ecologist with New England Wild Flower Society and current Hitchcock Center Board member), will share stories that stand the stereotype of an “inert” plant on its head. We’ll learn that even when plants wilt, sometimes they wilt on purpose, to protect their leaves from too-bright sun and desiccating winds.

Think plants don’t move? Actually, some of the fastest movements by any organism are recorded from certain plants that employ lightning-fast forces to propel their pollen and seeds. Even the Venus fly-trap slams shut rapidly when it encloses a hapless fly.

Speaking of carnivorous plants (be afraid…be very afraid…), we’ll delve into the wonders of this bizarre plant lifestyle. We’ll travel from the bogs of New England to the tepuis of Venezuela, to the outback of Australia to discover some of nature’s strangest meat-eating plants. Enthralled with studying these unusual species, Charles Darwin began to fashion his first theories of evolution.

Plants can be predators, certainly, but also parasites. Some plants don’t even bother to manufacture their own foods from photosynthesis; instead, they steal their nutrients from other plants or from fungi. The ghostly Indian pipe, a common denizen of our local forest floors, is an example; it’s white because it doesn’t need to produce expensive green chlorophyll.

What happens when a plant isn’t doing the eating, but instead is getting eaten? Plants have plenty of ways to fight back. Some use chemical compounds to repel herbivores—compounds that give us humans some of our most prized spices and valuable medicines. Other species ramp up the production of these chemicals only when attacked. If you grow basil, notice that the fragrant, tasty leaves get even more so after you’ve nibbled off the flower head; try this experiment out next summer. Still other plants emit volatile chemicals to shout out a silent, airborne warning to other plants. One of these chemicals is salicylic acid, the prime ingredient of aspirin.

Come learn about other defensive and downright diabolical behaviors of plants, as they forage, fool insects, and entice other insects to hunt down their enemies. Guaranteed, you’ll never look at a broccoli the same way again!

Elizabeth Farnsworth is a Senior Research Ecologist with the New England Wild Flower Society (NEWFS), and a biologist, educator, and scientific illustrator. She is also Editor-in-Chief of the botanical journal, Rhodora. She is currently principal investigator on a National Science Foundation-funded project to develop an on-line guide to the regional flora for teaching botany. She previously coordinated NEWFS planning for the conservation and management of over 100 species of rare plants. She has illustrated the forthcoming Flora of New England for NEWFS and the Natural Communities of New Hampshire with the NH Natural Heritage Bureau, and is currently illustrating and co-writing The Ants of New England (Yale University Press). She is co-author of the Connecticut River Boating Guide: Source to Sea and the Peterson Field Guide to the Ferns. She is a member of the graduate faculties of the University of Massachusetts at Amherst and the University of Rhode Island, a Master Teacher at the Conway School of Landscape Design, and has taught at Smith College and Hampshire College.