The great thing about birding is you can do it from any location! In this time of the coronavirus your own backyard could be your best and safest choice to view migration and nesting birds. I certainly understand not one yard is like another, some have very large yards, while others might have more modest surroundings, either way it’s amazing what moves through and over our yards during the year. If you haven’t already, start a yard list and you will be amazed at what you see. 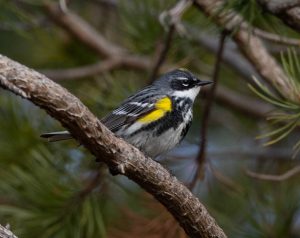 Also, you don’t have to just keep a bird list, I know folks that keep other lists from their home, such as mammal tracks, butterflies, insects, amphibians, reptiles and more. As for me, it’s primarily the birds that I focus on in my yard, because I’m the bird guy! Over the course of the last fifteen years I’ve recorded 144 species of birds at my home.

By starting a yard list you can keep track of migration movements and it is also fun to see what birds stay and nest in your yard. In sorting through some of my records I’ve noted when the first Dark-eyed Junco arrives in the fall and when the Eastern Phoebe returns in the spring. The Eastern Phoebe is a common nester here in the valley and the earliest of the flycatchers to arrive. My earliest arrival date for this bird was in 2012 when one arrived on March 18.

Currently, migration and the nesting season have started to ramp up here in the Connecticut River Valley as well as across New England.  As we approach the second full week of April several new arrivals are making their way to local ponds, reservoirs, fields, woodlands and to your backyard. Waterfowl have made their way back to our local Valley ponds and reservoirs, and not all continue on to the north. Canada Geese, Mallards, Wood Ducks and Hooded and Common Mergansers have started nesting or will be shortly here in the Valley. 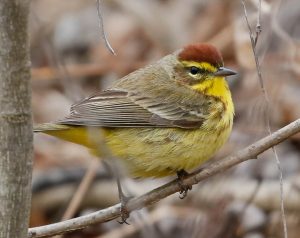 With the return of our summer species, our winter birds are starting to head out to their summer nesting grounds.  American Tree Sparrows and the original “Snowbird” the Dark-eyed Junco are starting to head back north or will be in the next few weeks. The American Tree Sparrow’s summer range extends from Alaska to Labrador, and while most of the Junco’s move into higher elevations of northern New England and Canada, they also breed here in at higher terrains here in western Massachusetts, with the strongest concentrations in Berkshire county. 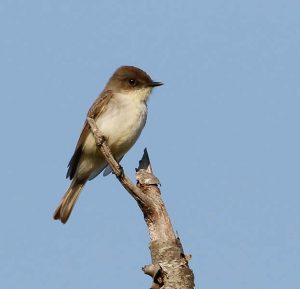 Currently nests being built in structures around our yard include Eastern Bluebird, House sparrows, European Starlings, and a Carolina Wren and Eastern Phoebe are nesting on our porch. Each has its own nest box at opposite ends of the porch (a small porch).  Each year my wife awaits the return of the Phoebe and gets great pleasure in watching the young grow and jump off the porch in their first awkward flight. In past years they have had two broods of five young!  It is also fun to see the size of the insects the parents try to feed the young. We have seen spiders, dragonflies, bees and even a praying mantis.  That one didn’t work so well. This year it will be interesting to see if the Carolina Wren and Eastern Phoebe can coexist on the porch. If you’re not familiar with Wrens, they have a lot of attitude! It’s going to be interesting to see how this plays out over the course of the next several weeks. I’ll keep you updated.

That’s it from here, continue to be safe and enjoy your local yard birds!

Sunday Birding with Scott is published weekly on Sundays.