The Rush of Warblers 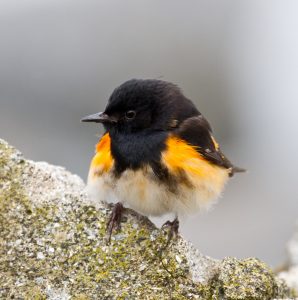 Looking at the Calendar, the month of May is the time when both serious and slightly less serious birder’s wait for with great eagerness. Every month offers something a little different during the birding calendar year, but it’s May that brings out the biggest birding crowds of the year. During the month of May dozens and dozens of species from their wintering grounds in the Caribbean, Central and South American make their way to the valley to establish breeding territories, while others continue their long journey to northern New England and some all the way to the arctic.

Without a doubt one of the biggest or the biggest highlight for many a birder is the return of the colorful Wood-Warblers to our region. Wood-Warblers are small, active birds and I’d say the majority of them are stunning. Some forge near the ground while others enjoy the treetops, and as a result inflicting pain in the neck region (warbler neck) of most birders. In Eastern North America we get the most of these highly sought after neotropical migrants, so much so that birder’s from around the world will come to well-known migrant hot spots like Magee Marsh in Ohio and Point Pelee in Ontario, Canada to encounter large numbers of these new world wonders. 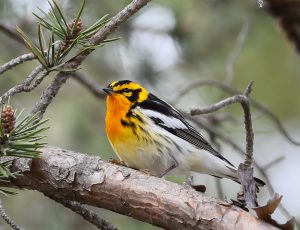 Back here in Western Massachusetts we generally get somewhere around 34 species of warblers during the course of spring and fall migration. If you didn’t have much of an opportunity to get out in May to take in some of the Warbler migration, all is not lost. Of the 34 species that pass through, about 22 species stay on and breed at different levels throughout Western Massachusetts. Some of the local common breeders are Ovenbird, Louisiana & Northern Waterthrush, Black and White warbler, Blue-winged warbler, Common Yellowthroat, American Redstart, Magnolia, Blackburnian, Yellow, Chestnut-sided, Black-throated Blue, Pine, Prairie, Yellow-rumped, and Black-throated Green.

Some of the less common warblers nesting in western Massachusetts include Worm-eating, (Mt. Tom and Mt. Holyoke Ranges) Nashville, Mourning, (Berkshires) Hooded, (Mt. Tekoa) Cerulean (Mt. Holyoke) Blackpoll (Mt. Greylock) and Canada. Getting back to a subject I mentioned a couple of blog posts back…. starting a yard list? You would be surprised at how many warblers move through your yard during the course of the year or years. My yard for example is rather open with a tree line separating our yard with another field. So, I don’t get large numbers of warblers moving through in the spring and fall, but over the years I’ve tallied twenty-four species! 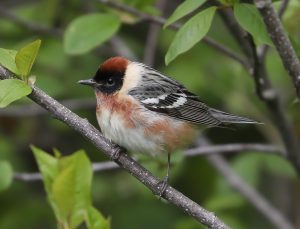 The other side of migration is the nesting season…..how many warblers could be nesting around your yard? In my yard I’m lucky to have three, Ovenbird, Pine Warbler and Common Yellowthroat, but depending on where you live, I’m betting you have more. Speaking of Nesting, our Carolina Wren family fledged about three weeks ago and the Eastern Phoebe family has three young who jumped out of the nest yesterday. The female is back fixing up the nest, getting ready to have another brood.

Get out into your yard and stay safe, until next time…………

Sunday Birding with Scott is published irregularly on Sundays.