Red crossbills, an enigma of variations 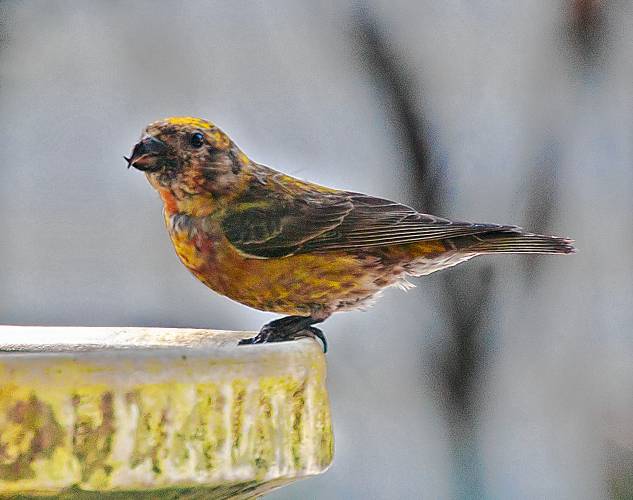 A young red crossbill visits a bird bath. Notice the tips of the beak’s top and bottom overlapping rather than meeting in the middle. John Van de Graaff

An evolutionary conundrum may soon appear in your nearest stand of spruce trees.

This winter, red crossbills, among the most puzzling birds in North America, are moving south and east of their usual haunts. As it does every few years, this species is likely to appear, possibly in large numbers, and may even nest here in western Massachusetts; reports of red crossbills in this area are already increasing.

Unusual among our birds in many ways, red crossbill can nest at any time of the year that it finds a good crop of conifer seeds.

This finch, the size of a large sparrow, is named for its crossed bill and the red plumage of adult males. Females and younger males are largely greenish yellow. These birds are often first detected by their tripled “jip, jip, jip” or “kip, kip, kip” flight calls.

The crossed bill — the top and bottom of the beak overlapping with each other rather than meeting in the middle — is an adaptation to feeding on the seeds of trees in the pine family, including pines, hemlocks and, especially for this bird, spruces. Like us, birds can exert much more force in closing their jaws than in opening them. A crossbill’s bill tips push apart as the bird closes its jaws. When this maneuver is done between adjacent scales of a cone, the bird’s tongue gains access to a seed.

Studies by several researchers over the past three decades have shown that North American red crossbills exist as about 10 different groups, with birds in each group sharing a distinct variation of the flight call. Furthermore, groups differ in bill dimensions and their preferred food trees, with bill size apparently adapted to cones of those trees. Pair formation seems to occur primarily within each group, but there has not been enough genetic sampling to determine the extent of this behavior.

Understanding the situation is complicated by the ability of these birds to learn calls, by the ability of individuals to feed on cones other than their preferred species, and by the mixing of different groups as they wander over North America.

All organisms living on Earth share a common ancestor that lived around 3.5 billion to 4 billion years ago. Remarkably, although we are all related, we sort into species — coherent groups of similar individuals. Individuals in a species share common structure, development, chemistry and behavior; in sexually reproducing organisms, members of a species have the potential to interbreed and to mix their genes in their offspring. These species are what naturalists identify when we go into the field with our binoculars and field guides. Even if they sometimes present challenges to us, they are usually quite distinct: A song sparrow is recognizably different from the similar savannah sparrow; a New England aster is recognizably different from the similar New York aster.

With evolution ongoing, there should be cases apparent at any given time in which a species is in the process of splitting into two or more new species. We can expect difficulties of classification and identification to arise in such cases. Indeed, biologists are challenged by groups like the gulls and the hawthorns in which apparently distinct species interbreed, sometimes commonly.

The classic mechanisms of species formation involve isolation of local populations, which then evolve differences from their parent populations, with those differences eventually including genetically determined characteristics that prevent interbreeding.

Close study of these animals, crossbills and dolphins, is likely to expand understanding of the different ways in which life sorts itself into distinct, and sometimes not so distinct, species.

This winter, keep your fingers crossed that you’ll spot some crossbills, keep your eyes on cone-laden conifers for groups of these birds with unusual crossed bills. Take the opportunity to wonder both at the power of natural selection to shape a bird’s bill and at the complexity of species formation.

David Spector is a former board president of the Hitchcock Center for the Environment and teaches biology at Central Connecticut State University in New Britain, Connecticut. For information on European folklore about crossbills, with a suggestion that they can be used to cure gout, go to tinyurl.com/earthmatters-34. For details on the different types of crossbills and how you can help to understand their behavior by recording calls, especially those of pairs of birds, visit tinyurl.com/earthmatters-35.