An odd bird with a spectacular spring courtship ritual 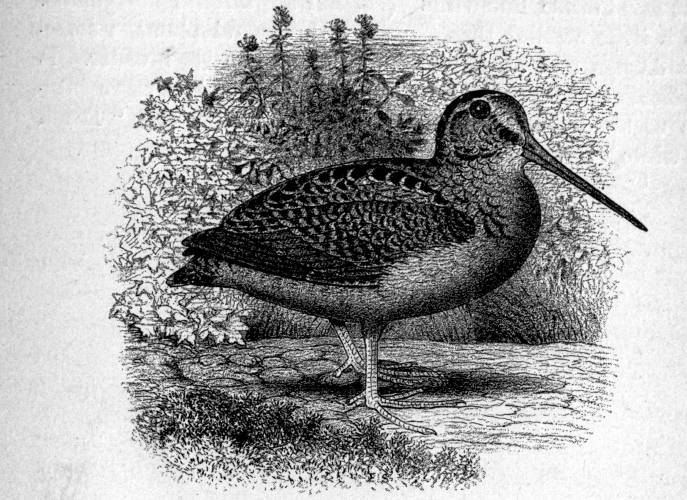 Take a toy football, coat it with glue, then roll it in dead leaves. At one end attach a narrow wooden dowel and two large black buttons. The result: a model timberdoodle, or American woodcock.

The model may be silly, but the real bird also can provoke laughter. The American woodcock (Scolopax minor) is a plump, long-billed, big-eyed, well-camouflaged, worm-eating sandpiper that nests in the woods of eastern North America.

The bill, up to three inches long, is equipped for catching earthworms and other subterranean invertebrates. The bill tip is packed with sensory nerves, the better to detect a worm in the soil, and the upper bill is flexible, the better to grab a worm. The large eyes, placed far back on the head with a view of the entire sky but not of the bird’s own bill tip, are well suited to detect predators approaching from above in dim light.

Woodcock are known for spectacular twilight spring courtship flights. The male walks back and forth over a patch of bare ground uttering a short, high, buzzy “peent” every few seconds. Eventually he takes to the air and flies in circles up to about 300 feet above the ground. As he reaches the top of his flight, the air passing through the three narrow outer primary feathers on his wing produces a twittering sound, augmented by his vocal chirping — a sound like bubbles popping. As he descends he becomes silent, soon landing near his departure point to resume his pacing and his peents. If the male is successfully attractive in this display, a female approaches to copulate with him; he has no further involvement with her, the eggs or the offspring.

One of the key biological studies of this species was done here in western Massachusetts. The late William Sheldon, then on the faculty of the University of Massachusetts, studied these birds at the Quabbin reservation from the 1940s to the 1960s, culminating in his classic “The Book of the American Woodcock.” The Quabbin, at that time reverting from farmland to forest, had young second growth woodlands with scattered clearings that were ideal for woodcock. The more mature forest of today’s Quabbin still has breeding woodcock, especially where there are interspersed open areas, but at lower densities than in the early to mid-20th century.

Woodcock often have been seen rocking back and forth as they hunt. This rocking has led to speculation regarding its function. One suggestion is that vibrations from the bird’s rocking stimulate earthworms to ascend toward the surface. Other species, including humans gathering worms for bait, tap the ground to encourage earthworm emergence. Worms might perceive such tapping as digging by moles or other subterranean worm-hunters, or as the pitter-patter of raindrops with the threat of drowning in saturated soil. Another hypothesis is that the rocking lets a potential predator know that the woodcock has detected it and that there’s no point in attacking the wary bird.

Perhaps the oddest thing about the woodcock is something that may not be true. There are old reports of flying females carrying their offspring to safety. Those who have most intensively studied the bird’s breeding behavior, however, have never observed such chick-carrying. Sheldon speculated that a female who is startled while brooding her young might accidentally carry off a chick tangled in her legs as she takes flight, giving rise to the idea that this is protective behavior.

Why “timberdoodle”? Some early British immigrants would have been familiar with the term “timmer doo” or “timber dove” for the wood pigeon, a similarly sized bird hunted in Europe. They might have applied an Old World name to a New World gamebird, and modified the “doo” to “doodle,” applying an old word for a foolish person to a bird that looked foolish to them. Although the origin of this colorful folk name is uncertain, this scenario seems plausible.

Better than my suggestion to build a model woodcock, instead get outside at dusk in the next month and enjoy the bird’s courtship flight. Check clearings with patches of bare ground adjacent to woodlands, especially young woods with soil rich in earthworms. Carefully approach such an area in the evening twilight and listen for the “peents” of a displaying male. If you hear the peents, stop and listen. Do not approach a male when he is on the ground, but when he takes flight one can cautiously move toward his display ground to be a bit closer when he lands.

At other times of day or of the year you might discover a woodcock flying suddenly away from you as you walk through its habitat. The odds of flushing a woodcock might increase if you walk with a dog, especially a cocker spaniel, named for its use in woodcock hunting. Perhaps you’ll be fortunate enough to discover a timberdoodle rocking along as it hunts earthworms. However you locate this cryptically colored bird, I hope that you enjoy our strange neighbor.