An encounter with a doddering old friend 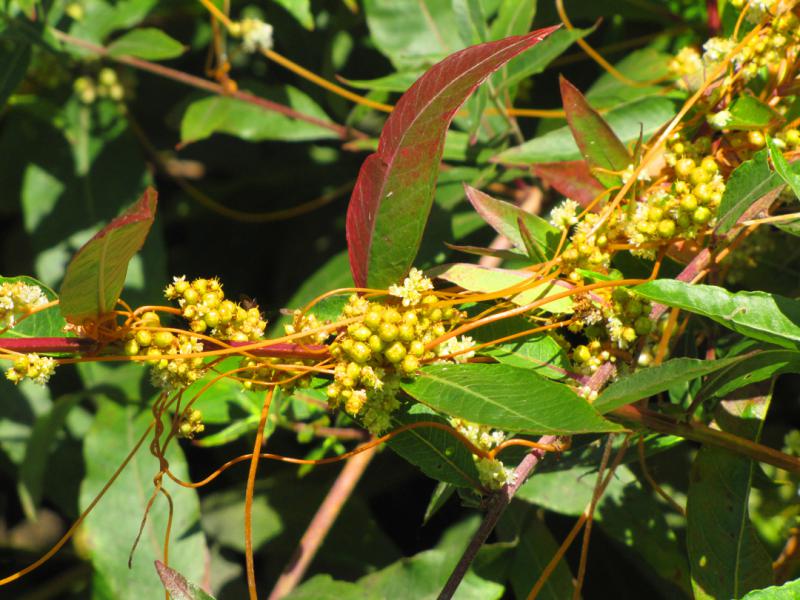 PHOTO BY REBECCA REID
Close-up of dodder on shoreline plants at Lake Warner in Hadley. An example of a “right-handed” twining of the dodder around the host plant can be seen in the lower left of the picture.

A river, where not constrained by cliffs, tends to wander. Small irregularities in a bank eroded by river water are the beginnings of meanders in the river. Loops cut off from the river become oxbow lakes, and as these lakes fill in they become oxbow marshes. I also wander, and the oxbow lakes and marshes of the Connecticut River, rich with birds, flowers and amphibians, invite my meanderings.

These lakes and marshes also have fish, which attract fishermen and fisherwomen.

Once, many years ago, I approached an oxbow in Hatfield and was dismayed to see what appeared to be plastic monofilament orange fishing line entangling patches of vegetation along its marshy edges. I saw this litter as an eyesore, and I was aware that fishing line can trap birds.

Closer inspection, though, changed annoyance and concern to a lesson. The “fishing line” was alive, a vine. Some book-work revealed that the plant was a dodder, and I retracted my ill thoughts, fortunately unspoken, toward people who fish.

The dodders are a group of plants that are parasitic on other plants. Dodder vines not only use their hosts for support, but also tap into them to extract nutrients. In my experience, the local species of dodder occurs most often on dense vegetation along wet margins, the kind of habitat where I first encountered it. Having become familiar with this habitat association here, I was surprised on a trip to California to see another dodder species on much sparser vegetation in a dry location. I know now that there are many species of dodder that occur in diverse habitats, so, as I travel, I can anticipate making the acquaintance of more of these.

Seeing dodder tangles on dense vegetation at the edge of a marsh I am reminded of what is perhaps the most famous paragraph in biological writing: the last paragraph of Charles Darwin’s “Origin of Species,” which starts with consideration of a similar sight:

“It is interesting to contemplate an entangled bank, clothed with many plants of many kinds, with birds singing on the bushes, with various insects flitting about, and with worms crawling through the damp earth, and to reflect that these elaborately constructed forms, so different from each other, and dependent on each other in so complex a manner, have all been produced by laws acting around us.”

Darwin was concerned with the ways in which ecological interactions among organisms, such as the parasitism between dodder and its hosts, both influence and result from evolutionary processes. Always fascinated by the complexity of life, he would have been intrigued by recent evidence that seedling dodder plants find their way to other plants — without which the dodder soon dies—by following airborne chemical cues from the hosts, a process not unlike that of a mammalian hunter using scent to stalk its prey.

A new twist on my observations of dodder comes from recently reading (in Hilary Hopkins’s delightful little book on common plants, “Never Say It’s Just a Dandelion”) that when dodder twines around another plant, or around itself to form a rope, it does so in a right-handed helix. A right-handed helix is one that, as it curls around a cylinder, slopes from the lower left to the upper right; most screws have a right-handed helix. To see a left-handed helix, look at a screw in a mirror, or look at most candy canes. My limited field experience of looking at dodder’s twist since reading Hopkins’s suggestion seems to confirm the pattern, but I would like to look at a lot more dodder curls before accepting that the plant is indeed always, or almost always, right-handed.

I wouldn’t want dodder covering my garden, and the farmers that grow the food I eat attempt to exclude it from their fields. As a naturalist, though, I feel I have a friend of several decades since I made this plant’s acquaintance. Dodder presents a familiar face showing up in new places and continues to teach me new bits of natural history as I meander through the outdoors and through the ever-accumulating knowledge in books.

David Spector is a former board president of the Hitchcock Center for the Environment and teaches biology and English at Central Connecticut State University. He notes that the word “doddering” is etymologically unrelated to the plant called dodder.