By Ted Watt, For the Gazette

Earth Matters began 10 years ago, on March 21, 2009. To celebrate, the Hitchcock Center is re-running the first column, with an update by naturalist Ted Watt.

Also, The Hitchcock Center for the Environment is holding a 10th anniversary celebration of Earth Matters on Thursday, March 28, from 6 to 7 p.m., with refreshments, readings and more. Free and open to the public. Visit Hitchcock’s website at hitchcockcenter.org or call 256-6006 to RSVP.

It has happened every year since the glaciers melted and forests returned to New England. And it will happen again this year, from now to mid-April in our area.

When the snow is largely melted in the woods and it starts to rain during the day, keep your eye on the temperature. If the rain continues and it remains above 40 degrees as darkness descends, it’s Big Night for the Pioneer Valley’s spotted salamanders.

The eight- to nine-inch, jet black and canary yellow-spotted amphibians will leave their woodland habitats and crawl to temporary spring pools (also known as vernal pools) where they mate and lay their eggs.

In the pools they dance — sinuously, seductively — males drawing females to their prepared sperm packets deposited on the pool bottoms. Courted females pick up the sperm, fertilizing their egg mass internally. The females then search out a twig — not too shallow, not too deep — on which to attach their clear, jellied masses of eggs.

The eggs slowly develop in the chilled water. The top of the water will freeze, but the masses, if placed properly, will escape. Depending on rains, however, the water level may drop, occasionally exposing the eggs and killing a whole year’s hatch. It’s risky in the short run, but the salamanders’ ancestral memories breed long-term success.

Upon hatching, the creatures’ carnivorous larvae wiggle out of the egg masses. They devour water fleas and midge larvae and are preyed upon by water tigers and red-spotted newts. It’s a fine balance. Enough survive and metamorphose into adults by midsummer to carry on the species. 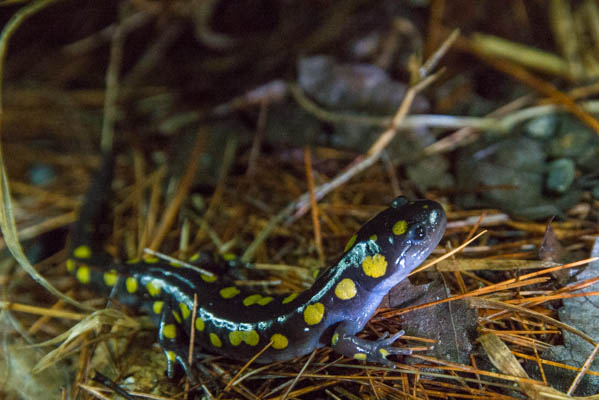 Over the years vehicle traffic began to affect the population — significantly fewer salamanders made it to the pools. The amphibians protect themselves from predators with a lima bean-shaped poison gland under the jaw on right and left. Their black and yellow coloring serves as a warning of the poison to other animals. But as they cross our roadways they have no defense against passing vehicle tires.

That’s why the Henry Street salamander tunnels in North Amherst were constructed. The first of their kind in the nation, these structures (just south of the junction with Pine Street) were installed in 1987 by the Town of Amherst’s Public Works Department with the cooperation of Cowls Lumber (the landowner), and the aid of the Massachusetts Audubon Society, the Fauna and Flora Preservation Society, the Hitchcock Center for the Environment and many volunteers.

The crossing from their upland habitat above Henry Street to their vernal breeding pools below has been greatly altered. The tunnels enable the spotted salamanders to cross under the road risk-free. If you’re in North Amherst and have a free moment, stop and take a look at these structures. They’re worth seeing any time of year.

Don’t miss our favorite Pioneer Valley amphibians on Big Night. When the conditions are right, put on a headlamp, pile on your warm and waterproof clothes and make your pilgrimage. You may be out for hours in the cold, wet darkness looking for the salamanders. If you find them, perhaps you will be able to save some of them from the tires.

Ten years after writing this, I’m happy to report that the Henry Street salamander tunnels are still in place and still functioning, assisting the spotted salamanders and several other amphibian species in their journeys under the road. As I wrote in an Earth Matters column last April, the infrastructure of the 30-year-old tunnels is not in the best of shape. The 18-inch-high plastic mesh drift fences, in particular, need replacing. Their job is to direct the animals into the tunnels for their journey under the road to the pools. We’ve mended the numerous holes and tears with wire, twist ties and, yes, duct tape, but the animals still find their way through even the tiniest opening, placing them on the roadway and in danger. So our volunteers continue to attend the migration and help the animals across the road. Each year brings the incredible thrill of seeing these creatures, seemingly so slow and vulnerable yet so persistent, making one of the first journeys of our New England spring season.

This season we’re excited to be replacing the drift fences this season with new plastic mesh fencing designed particularly for this purpose. Made by the  Animex Fencing, it has been installed in many locations around the world. A curled-over lip at the top of the fence prevents the salamanders from climbing over.

Last spring we had a very ambitious crew of volunteers and we managed to count all the salamanders that moved across the road when our volunteers were there. We were excited to have the biggest count ever. So the good news is that the tunnels continue to help the population. That’s why we continue to do this. And we’re always excited to welcome more volunteers who want to help. Come join us!