When north is not north

It was one of those thoughts you put aside to think about later, it was so fantastic I’d lose sight of the task at hand. I was researching why magnetic north is moving away from Canada and drifting toward Siberia, increasing its speed from 6 to 31 miles per year during the past two decades.

This rapid movement hit the headlines when the World Magnetic Model (WMM), managed by NOAA and the British Geological Survey, was urgently updated a year ahead of schedule. The WMM is used by the airline, maritime, satellite, surveying and mapping industries, as well as the military. The compasses in our smartphones and backpacks also point to magnetic north.

The thought that I had parked to think about later decided to rise through my sleepy subconscious at 4 a.m. — that 1,800 miles below my bed and the staid, bucolic landscape of Whately, with its grazing cows, forests, fields and roaming bear — is a molten outer core, 1,400 miles thick, of iron and nickel, that ranges in temperature from 4,000 to 9,000 degrees Fahrenheit!

To put this sobering fact of life on earth in context, these distances are approximately the distance between Massachusetts and Florida, and the boiling point of water is 212 F.

The donut-shaped outer core surrounds earth’s inner core, a solid sphere of iron about the size of the moon — together the two cores are about the size of Mars. The important difference between the cores is that the outer core is liquid. The inner core that formed over a billion years ago is so hot it melts the metals of the outer core. With heat created by decaying radioactive material, the inner core can reach temperatures as high as 11,000 F, hotter than the surface of the sun. The pressure of the earth’s layers surrounding the inner core keeps it from melting.

That this torrid, molten sea of metal is somehow tied to the earth’s magnetism, the phone in my pocket and protection of the earth’s biosphere and atmosphere stretches the bounds of human-scale imagination. 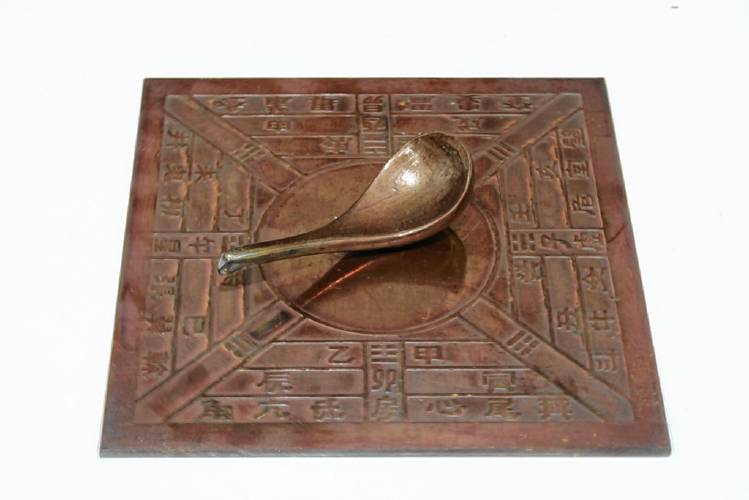 A model of a Han Dynasty (China, 206 BC–220 AD) south-indicating ladle or “sinan.” The south-pointing spoons were probably magnetized lodestones. Originally invented for divination, these devices were in use for navigation by the 11th century. Wikipedia

To stretch our imagination further, there are two norths. True north is actually a geographic point on the earth’s surface marking the North Pole. In the Southern Hemisphere, this point is the South Pole. The imaginary line through the center of the earth, connecting the North and South Poles, is the earth’s axis around which the earth is spinning at about 1,000 mph. One rotation takes 24 hours or one day. This spinning causes the outer core’s turbulent, molten sea of metal to flow and gyrate, creating electrical currents that result in the earth’s magnetic field.

This dynamic behavior of the outer core produces the other north — the magnetic north that ebbs and flows with the outer core’s fluid movements. The accelerated movement of magnetic north that had the WMM adjusting their calculations results from a “tug-of-war” between two large lobes of magnetic field, one under northern Canada, the other under Siberia. It is suspected that a change in the flow of core material under Canada has caused the patch to become elongated, thinner and weaker, allowing the stronger Siberian magnetic field to pull magnetic north closer to Siberia at an accelerated pace.

If you are navigating an airplane or ship, you want to know the difference, or declination, between true north on the map and the magnetic reading from your compass. Otherwise where you think you’re going on the map may not be where you end up based on compass readings. WMM’s forecast of where, and how fast, magnetic north is moving avoids this problem.

While the earth’s magnetic field is critical to keeping our travels on track, this is secondary to protecting life on earth. Heading toward earth from the sun — traveling at one million miles per hour — is a bombardment of radiation from solar winds and solar flares.

Without the earth’s protective magnetic field creating a shield that deflects this radiation around the planet, radiation would erode the atmosphere, including the ozone layer, subjecting life on earth to harmful cancer-causing radiation. This magnetic shield plays a similar role in protecting us from deeper space cosmic rays that can damage the biomolecules of living organisms, including DNA and RNA.

The earth’s magnetic field join the powers of the earth, with life on earth. For billions of years the shielding has influenced the evolution of the biosphere and life within it; its benefits are projected to reach billions of years into the future.

Out my bedroom window dawn was lighting the clouds from below; the mail truck was chugging up the road, the first tractors were making their way to the fields. I got up and made my way to the coffee pot. Watching it perk, I ruminated on my compass, magnetic north and true north. While a practical tool, my compass had overnight also become a talisman reminding me of the enormous, powerful and immeasurably complex forces that make my smaller world safe. Coffee in hand, I made my way to the porch to watch the sun rise over the valley.

Tom Litwin is a conservation biologist and former Director of the Clark Science Center at Smith College. He is retired from the Jackson Laboratory in Bar Harbor, Maine and Farmington, Conn., where he served as the Vice President for Education, and continues as a Visiting Scholar.

3 responses to “When north is not north”