To unravel a tree’s story, the secret is in the wood

By Lawrence J. Winship and Josia Gertz DeChiara For the Gazette

Field walks in the forest ecology class at Hampshire College in Amherst were often like murder mysteries, in very slow motion. Which trees were thriving, which were diseased, which had died — and what was the prime suspect?

First we identified the players, taking “interviews” and collecting names and addresses. We would stop walking at a likely scene and try to take in the patterns of size and shape, to see the structure of the woods and to read the tapestry of branches, leaves, snags, stumps, saplings and mature trees, like pages from Tom Wessels’ excellent book “Reading the Forested Landscape.”

Each tree has a story, and if we read it correctly that story could tell us a lot about local ecological history. It became clear that the story of the woods had to be read in the context of many other clues and indicators — land form, signs of human activity such as stone walls or abandoned roads, different shrubs, herbs or ferns under the trees, and the lean, size of each tree.

We could only build a strong “case” by considering the forest community both as a collection of individuals and as a whole, changing over time. 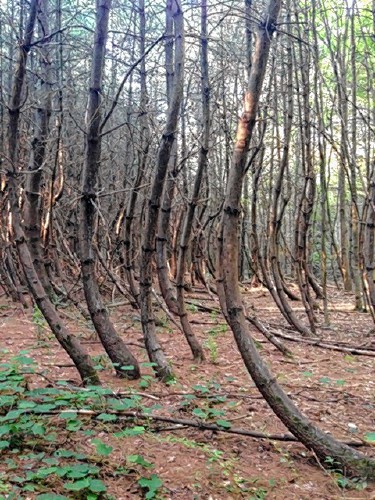 Field observations could only take our investigation so far. Often we would collect forensic evidence to take back to the lab. Hidden in each tree is its personal history, encoded in the width of each year’s growth ring and in changes to the shape and color of the rings.

Taking a non-intrusive core from a tree trunk with a hollow borer permits a glimpse into the growth history of one tree on one spot. Sometimes we’re able to saw out a cross-section, or a “cookie” from a recently felled tree or a piece of dead wood. In the case of a fire scar in a standing snag, careful cutting let us remove a “wedge” of wood complete with centuries of fire scar history.

Under the microscope, we can observe even the thinnest annual ring and take into account the particular anatomy for each species, verifying our field identification. If the sample is from a living tree, we automatically have a “bark date,” labeling each ring with the year it formed. For dead wood, we use a method called “cross-dating” in which the pattern of ring widths, caused by common and widespread patterns of temperature and rainfall, provides a sort of bar code, marking particular years.

One of the first questions is “How old is that tree?” — easily read from a good core sample. Surprisingly, the biggest trees are not always the oldest in a stand. An eight-inch diameter hemlock in our local woods can be 200 years old, whereas the huge oak nearby is only 85 years old. Birch saplings filling in a gap caused by a snapped pine can be 12 feet tall in the center of the opening, and six inches at the edge, all the same age.

Measuring the pattern of ring widths, and comparing among dozens of trees on a site, is even more revealing. A slow-growing tree may suddenly put on a burst of growth called a “release” because it usually means the tree has gone from shade to sunlight.

In most stands in the Pioneer Valley one can find a release caused when the 1938 hurricane toppled whole patches of canopy trees — a great marker ring. Sometimes, individual trees escaped complete knockdowns but had upper branches torn away. These trees show a characteristic drop and slow recovery, in sharp contrast to nearby trees that were released. Ice storms leave much the same evidence.

At Hampshire College we have a particularly puzzling tree mystery. Located right in the middle of a typical second-growth mixed hardwood stand, there is a patch of slender white pines, about three to five inches in diameter at the base, densely packed, with a peculiar growth form. All the trees start straight up from the ground, then take a sharp bend downward. The trunks continue up in a long arc for about 10 feet, all tipped in the same direction, like hair combed across a certain politician’s scalp. Then they make a sharp turn upward, growing once again straight into the sky.

Pines are particularly illustrative for this kind of mystery, because they put on one growth whorl per year, so one can count years back from the tip to see when the sharp bend upward occurred. But to see the bend at the base we had to select a few trees for cutting, and examine the rings at the base.

These trees began in an abandoned horse pasture, in a particularly good seed year for pines. There are a few dead red cedar trees in among the pine, further evidence of pasture. The rings of every tree are perfectly round at first, then suddenly become eccentric ovals and the wood takes on a dark red color. The trees are responding to severe bending, growing back upward to the sun, and giving the signature of reaction wood.

Counting back, we found that whatever pushed these trees over, and then let them once again spring back up and grow straight again, happened in the mid- to late 1980s. What do you think happened? The secret’s in the wood.