A good time to talk about the tenacious turkey 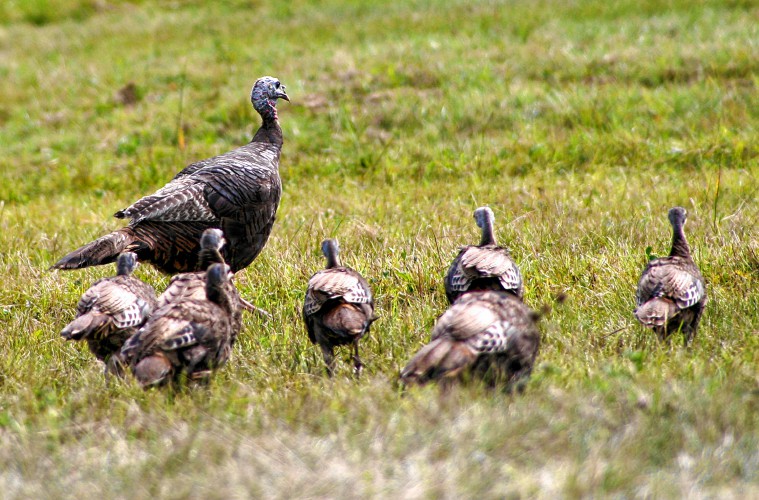 Recently, I had a startling close encounter with a turkey.

One morning, I woke up to a loud crash like a gun shot. I leapt to my feet and looked around. Not detecting anything amiss, I was just about to return to bed when I was startled again, by the doorbell. A neighbor informed me that a turkey had just flown into my front window!

“How’s the turkey?” was my first instinctive question. “Uh, OK, I guess — it flew off,” replied my neighbor.

Then it dawned on me. I saw nothing unusual inside because the turkey had completely shattered a storm window, leaving shards of glass all over the driveway but leaving a perfect view of the world through the now empty frame. Sigh. I spent the bulk of the morning cleaning up broken glass and worrying about the fate of that bird.

With Thanksgiving fast approaching, I think it’s timely to talk turkey. Not the domesticated butterball that may soon grace your family’s table, but the fascinating wild birds that are the largest and showiest fowl in our area.

Let’s start by pronouncing their downright melodic species name: Meleagris gallopavo (this is best done in an Italian accent).

Turkeys were once completely extirpated from the Pioneer Valley by settlers who hunted them relentlessly. But they’re making a comeback due to diligent efforts to reintroduce them. We’re more likely than ever to see mothers and their fuzzy poults crossing roads and fields, or to hear the silly gobbling of big males strutting their stuff.

Fossil evidence tells us that these resilient birds have lived in the Americas for at least 5 million years, so it’s no surprise that they’ve recovered, given the chance. They now number in the millions worldwide.

What’s a day like in the life of a turkey?

Turkeys spend most of their time foraging for fruits, leaves, nuts and other vegetable matter to feed their big bulk. You may have noticed lots of small, circular depressions scattered throughout pine needle litter on the forest floor. That’s the sign of turkeys, rooting around for edibles, most of which are plants, but which also include insects. There’s an urban (or suburban) legend out there that posits hopefully that turkeys are also adept at hunting for ticks. Alas, experiments show that ticks are no less abundant in areas where turkeys intensively feed relative to areas with low turkey density.

When they’re not thinking about food, turkeys are probably thinking about sex, if they’re not pondering the great philosophical questions of the day (same for humans, really). Males, called toms — gobble and cluck to attract females and to warn away other males from their territory. Toms fluff up their chest feathers to present themselves as h-u-u-u-g-e, and simultaneously fan out their impressive tails to create a rainbow of iridescent colors. (How many of us have drawn a turkey by tracing our hands, adding a head, and coloring in the tail?)

The tom also engorges his red wattle on the throat and neck, and the fleshy tissue overhanging his beak (called a snood) with blood.

Altogether, this display, plus the fact that males are nearly twice as large as females, should impress a female (hen). But females are choosy, and take their time selecting a mate. I’ve seen several males advertising competitively in a flock while the females all but ignore them. Nevertheless, a successful tom usually mates with several females.

After that, the females are on their own to raise the offspring, as the males retire to their tom caves and hang out with other males (but no TV). A female carves out a shallow nest in leaf litter about a foot in diameter, and lays an average of 10 tan eggs that are mottled with pink spots. In about a month, the eggs hatch. The precocious chicks are able to leave the nest within half a day, to follow mom about. Several hens and their chicks may coalesce into a single large flock.

The chicks will feed greedily to eventually grow into adults weighing from 8 pounds (females) to 15 pounds (males), assuming they are not taken out by their primary predators: bobcats, coyotes, raccoons or humans.

At the end of a long day, scratching the ground or even climbing into shrubs to get food, turkeys settle in to roost. They fly (or lumber) into the lower branches of oak, cherry, beech and other trees to while away the night, safe from prowling predators patrolling the ground.

I have always been amazed that a bird the size (and shape) of a bowling ball could ever get off the ground if threatened by a predator. But fly they do, if somewhat clumsily, with lift-off usually aided by a good running start. I don’t know what the turkey that took out my window was fleeing from, but it obviously got away and will survive another Thanksgiving hunt. Fly and be free, big buddy.

Elizabeth Farnsworth, who says she’s kind of a turkey herself (but we don’t believe her), is Senior Research Ecologist at New England Wild Flower Society. For another taste of local turkeys, see David Spector’s Earth Matters column from November 2009.