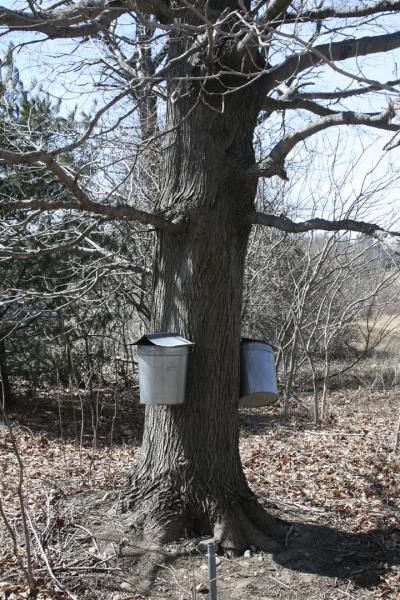 Every year when maple sugaring time rolls around, I try to figure out when to tap the trees to make the most out of our short sugar season.

It largely depends on the weather, and how the trees respond to it. The latter is actually quite complicated. Trees have a remarkable ability to pump water very high with very little effort. Trees are amazingly complex beings and nowhere is this more evident than in their hydraulic system.

Although we now understand how they do it, we humans cannot build any comparable structure.

Usually, tree sap is raised by the evaporation of water from the leaves, when tiny pores open to let in carbon dioxide to run photosynthesis. It’s like sipping from a straw, in which we create a mini-vacuum that draws up the liquid. In trees, the water is actually pulled up cell by cell through osmosis, in which fluids pass through the cell walls from a less concentrated solution to a more concentrated one.

But the amount of suction that leaves exert is minuscule compared to how strongly we can suck through a straw. Even with a straw, there is a limit to how high we can pull up liquids before gravity overpowers us. Yet trees move fluids to tremendous heights. If you compared the strength of a tree’s osmotic pressure against gravity, you would have to conclude that what trees do simply is not possible. Clearly, they just can’t pump as high as they do from osmotic pressure alone.

But they do pump sap that high, and the way they get around this limitation is ingenious.

The sap from the roots flows through tubes of dead wood, called xylem, just inside the living outer parts of the tree. It turns out that these xylem tubes aren’t like straws at all. Instead, they are complex, interwoven bundles of short tubes. And these tubes have pits between them that allow liquid to move laterally as well as up. This structure breaks the height of the column into small bits where osmosis can act as a stronger force.

For maple trees, here is where the story gets more intriguing. As I mentioned above, sap usually moves up in response to the evaporation of water in the leaves. But in February and March, maple trees have no leaves yet. So how do they get the flow started?

The answer lies in the fact that maples store carbon dioxide (CO2) in cells adjacent to the xylem. This CO2 contracts and expands with temperature, thus acting as a pump for the sap.

During the evening, falling temperatures shrink the volume of the CO2, creating a vacuum to draw the sap up from the roots. In the morning, as the tree warms, the CO2 expands, pushing the sap the rest of the way up, or out the holes we make to collect it.

This system is unique to maples (and walnut trees), and gives these species an advantage in starting the short, northern growing season earlier than other types of trees.

Other species also move sap before bud break, though not quite as early.

This past year we tried to make birch syrup for the first (and probably last) time. What an adventure it was. Birch trees’ sap production is completely different from that of maples.

First, their sap starts flowing just about the time when the maples’ sap stops. Second, it flows almost non-stop, practically pouring out of the tree.

Even the sugars produced are different: fructose (a simple sugar) is in birch sap instead of the more complex sucrose produced by maples. I don’t know how birches pump sap, but somehow it happens and oaks and cherries and all the other species of northern deciduous trees have their ways, too.

If you have ever thought that trees are static, passive organisms, you can finally lay that idea to rest. There’s nothing passive or simple here. But never mind —it’s time to go into the woods and start sugaring again.

When he’s not tapping trees or tending the sap boiler, Henry Lappen is an environmental educator who performs the show “A Passion for Birds.” His website is www.HenryLappen.com. He is also the chair of the Amherst Public Shade Tree Committee (http://www.amherstma.gov/apstc).