Oddly shaped trees in our woodlands may hold a human story 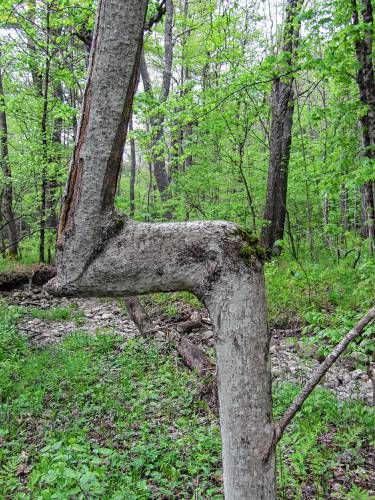 How could it be that the trees were shaped by natural events? Wasn’t it more likely that they were the results of deliberate, intentional human intervention with a message?

One particular shape, with the cultural ignorance of the age, we called “Indian trees.” We found trees with a main, vertical, large-diameter trunk bent nearly horizontal a foot or two above the ground, and then a straight trunk rising from the end of the horizontal part like an out-stretched arm bent 90 degrees at the elbow. These trees must be meant to mark special places or perhaps a trail. It would take years to train a tree that way, so surely these trees were important, and worth preserving since very few have survived until now.

Three books document the existence of rare “trail marker” trees east of the Mississippi River: “Talking Trees & Spirit Trails: New York State Native American Trail Trees” (2012) by Carl Andrew Koehler, “Native American Trail Marker Trees: Marking Paths through the Wilderness” (2011) by Dennis Downes and “Indian Trail Trees” (1997, out of print) by Elaine Blohm Jordan. These authors document marker trees east of the Mississippi with photographs, and join into the lively debate over the origin and significance of these unusual trees. Are they really products of human activity? Do they occur along old or active trails? Alternatively, could an unusual series of natural events, such as ice storms, fallen trees and limbs, or disease lead to these shapes?

By comparison, on the western edge of our continent, where the trees live longer and native American cultural practices have also persisted intact longer and over a wider area, there are many more “culturally modified trees” in the landscape. Significant effort has gone into the location and legal protection of these trees as living components of significant cultural traditions. Western cedars, pines and firs are not only shaped but also show scars from repeated gathering of bark and inner bark for food, medicine and ceremony, and from serving as messages.

Certainly, all trees preserve a record of their responses to climate and other causes of physical alteration in their structure and growing habit. People spend a great deal of time and effort creating espaliers, bonsai, topiary and the upside-down trees at the Massachusetts Museum of Contemporary Art. Why should it not be that other humans created marker trees? (They are often called “leather thong” trees, because it might be that leather thongs were used to hold young saplings horizontal to the ground until they became fixed in that position as the first step in the process.)

But if we find living trail marker trees in New England, does that also imply a continuing living tradition of creating these trees? Trees in our region rarely live past 200 years, so certainly pre-contact trail markers are long gone. Who in the past 200 years might have carried on the tradition?

We might look along the few remnants of trails used by native Americans and eventually by English colonists. The Old Bay Path, modified into the Bay Path in 1673, began in what was once the village of the Patuxet, near the present Kingston/Plymouth line on Massachusetts’ South Shore and led eventually to Springfield.

The Hadley Path, also built in 1673, left the Bay Path in West Brookfield, then wound on into Hadley — the Bay Road from Belchertown follows much the same path. Perhaps we should look along the Mohawk Trail, in a less developed part of our Commonwealth?

If we did locate a marker tree, we could determine its age by counting tree rings or using similar methods. But perhaps for understandable reasons, people have been reluctant to allow even the least invasive sampling of these trees in other regions. Whether these remarkably shaped trees have their origin in human activity or natural events, the discussion over the origin and significance of all kinds of culturally modified trees brings up two thoughts (at least!) about the relationship between people and their environment. It’s altogether reasonable that those who live in close and vital engagement with the forests would discover and develop methods of communication from the materials at hand.

We see petroglyphs, stone markers — why not living trees? As humans, we play with and celebrate a common intellectual, cultural heritage of inventive spatial relationships embodied in our art and objects. Naturally this would extend to trees in our woodlands. Imagining the actions and purposes of people who were here before us can only enhance our connection to and appreciation of the woods around us.

So, as you tramp the forests of New England, be alert for oddly shaped trees, be respectful, investigate and let me know what you make of it.

Lawrence J. Winship, a former Hitchcock Center for the Environment board member, is a retired Hampshire College botany professor.