The jet rolled down Bradley’s runway, gaining speed until it reached about 170 mph and lift off. The thud of the wheels being contracted confirmed we were gaining altitude. From my window seat, I watched the landscape unfold below.

Hartford’s tall concrete buildings and dense network of roads were quickly left behind as the plane turned north. Below were the Connecticut River, agricultural fields, suburban neighborhoods, parks and woodlands, and commercial and industrial centers that created a patchwork of shapes, colors and textures. The patchwork ebbed and flowed as we approached and passed over Springfield and Northampton. As the jet tracked to the northeast we crossed the mountains and dense, unbroken forests of Vermont and New Hampshire. Within minutes the coast of Maine, with its hundreds of islands, appeared. Our bird’s eye view of the New England landscape ended as we reached the Canadian Maritimes, turning east to begin the journey across the vast North Atlantic.

Although the view is interesting, the complex landscape patterns present challenges for conservation biologists working to protect biodiversity and wildlife habitat. How do you make sense of this diversity of land-use types when trying to develop a protection plan or policy, particularly when conservation dollars are scarce? The emerging discipline of landscape ecology has provided a powerful new way of thinking about the juxtaposition of natural and human-created landscape types. The increasing sophistication of digital aerial photography, combined with fieldwork and the analytic capabilities of geographical information system software, has helped organize the bird’s eye view. The results are maps that help categorize land-use types, and within those types are layers of maps that depict the resources they contain — vegetation, wildlife, water, soil, built structures. 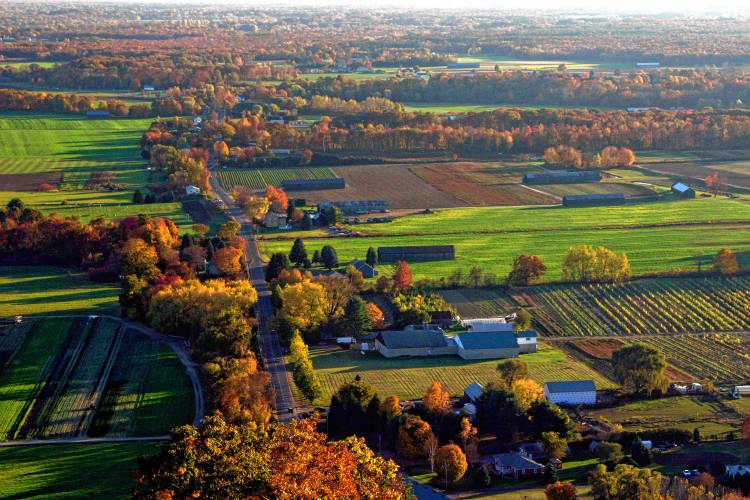 View of the Connecticut Valley from Mt. Sugarloaf in South Deerfield. Landscape ecology allows resource managers to see and evaluate the big picture when deciding questions about land use and conservation. COURTESY OF REBECCA REID

Landscape ecology, when applied over time frames of years and decades, provides insights into the dynamic nature of landscapes. The New England landscape is constantly changing: Urban and suburban sprawl consume forests and agricultural fields, ponds become marshes and eventually wooded swamps, grasslands and fields turn into scrublands and through succession become mature forest. Understanding the history of a grassland that is becoming shrubland may also explain the decline of a field nesting species like the eastern meadowlark. Landscape ecology helps frame the question for resource managers: Do you convert shrubland back into grassland to improve the declining eastern meadowlarks’ habitat or let it succeed into forest and manage for forest birds like the wood thrush?

This scenario raises other important questions: Is there enough grassland in the region to support a sustainable meadowlark population and would converting this shrubland make a difference? Maps that show over time the changes in land-use types help us predict the future of meadowlarks and wood thrush in the region.

Habitat fragmentation — where a large area of a habitat type like grassland or forests is broken up into smaller and smaller pieces — greatly impacts the ability of a species to maintain a viable population. Whether grassland or woodland, small parcels of habitat have proportionately more edge than larger parcels, subjecting some species to higher predation rates and disturbance from adjacent incompatible land-use types like roads, subdivisions and commercial development.

A second factor is how isolated the parcel is from others of its type. A plan to protect grassland far from other grasslands is less likely to maintain a grassland bird population than one connected to other grasslands from which the birds can recruit new members. Meadowlarks use up to six acres for their breeding territories. Converting to grassland an isolated five-acre shrubland that’s adjacent to forest is unlikely to be a good investment if the goal is to increase the threatened meadowlark population. Letting the shrubland become forest and increasing wood thrush habitat may be the best option.

These difficult conservation decisions involve value judgments, technical information and economic factors. Landscape ecology helps organize the decision process, and can be applied on global, regional and local levels. Two recent reports point to the global role of landscape ecology in combating climate change. The UN Intergovernmental Panel on Climate Change’s report, “Climate Change and Land,” called for better management of agricultural and forest lands to promote carbon storage, noting that natural processes can absorb almost a third of the carbon emitted by burning fossil fuels. Similarly, a Swiss research team reported in the journal Science that, globally, an area the size of the U.S. is suitable for reforestation and could eventually capture two-thirds of human-produced carbon emissions. In effect, these are calls for global landscape ecology initiatives.

A September paper in Science reported the startling fact that, since 1970, North America has lost 3 billion birds, approaching a population loss of 30 percent. A major contributing factor is habitat loss, including fragmentation and insularization. Landscape ecology can play a significant role in reversing the landscape patterns contributing to these trends.

How can landscape ecology make the leap from global and continental scales to our local communities? In Massachusetts, it’s actually underway in one form or another. Every town and city has a planning board and conservation committee that routinely deal with issues relating to the landscape. We’re also fortunate to have statewide governmental and nonprofit organizations, nature centers and land trusts dedicated to landscape and habitat conservation. Many options exist to participate by volunteering, attending public meetings, or providing financial support. Investing in our landscapes is an investment in the quality of our lives — it’s the stage on which our lives and nature intertwine.

Tom Litwin is a conservation biologist and former director of the Clark Science Center at Smith College. He is recently retired from the Jackson Laboratory in Bar Harbor, Maine and Farmington, Connecticut, where he served as the vice-president for education and continues as a visiting scholar.

One response to “A bird’s eye view of landscape ecology”