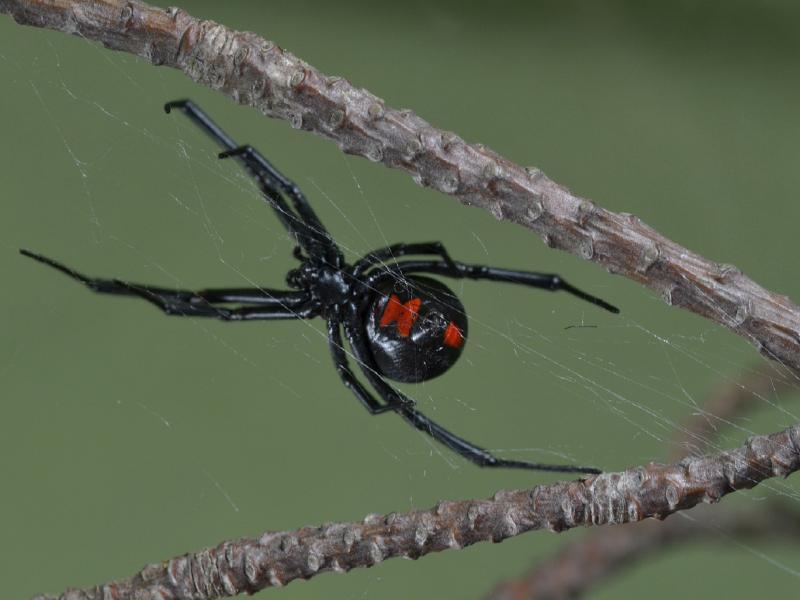 I met a widow whose style and grace captivated me. Her glossy black skin glowed, dimpled here and there, in all the appealing places. Long graceful legs extended from her body and moved with delicate flow. In the late afternoon, her short hair glinted sliver in the softening light. And her red tattoos, unique to her, made her an instantly recognizable standout in any crowd.

She was, of course, a black widow spider — in particular, a southern black widow (Lactrodectus mactans), one of several species found in the United States. How she came to be here in Amherst was a mystery; she was found on a piece of firewood. The range of this species extends from eastern Texas through Florida, up through Kansas and northward to southern New England but, generally speaking, black widows are not common in Massachusetts. Reports tend to link them with hitching rides on such items as produce from other parts of the country, where they may even be a nuisance in fields if their populations are high.

I was new to black widows; she was my first. I’ll never forget looking at her through the lens of my camera. A brief photo shoot enabled my favorite experience of all: sharing her with others in a safe manner. Many friends wanted to see, but many were also fearful. When those who were afraid saw her up close through photographs, they inevitably saw a creature of beauty.

She really did have dimples, and short silvery hairs (pubescence). Her iconic red hourglass did look like a tattoo, complete with the fine lines and patterns inherent in a creature’s “skin” or exoskeleton. The female typically hangs upside down in her web, sometimes making it easy to see her red hourglass on the underside (ventral side) of her abdomen. Viewed from above though, you may only be able to see three lightly colored splotches of red down the center of her black abdomen, just above her spinnerets (her silk-spinning organs). The female is much like many of the iconic images depict her: glossy black with long black legs extending at least two inches.

Black widows prefer to reside in dark sheltered areas such as woodpiles, crawl spaces, barns, outhouses, stone walls and attics where they build their webs. Female spiders may spin up to seven types of silk for different purposes. One of these is to spin egg sacs — between five and 10 — in the warmer months. Each sac contains up to 250 eggs. When the young spiderlings emerge, they deploy silk strands and elevate their abdomens to be carried away on air currents, a process called ballooning.

In the wild, widows live up to five years, eating grasshoppers, beetles and caterpillars among other insects that get caught in a large protected web. Like most spiders, the black widow effortlessly traps her insect prey with just a few stands of webbing, rotating her abdomen in a circular motion as her back legs complete the task. Once the captured insect is still, she bites, injecting an enzyme that envenoms and liquefies her prey for consumption.

While black widow spiders are highly venomous and should not be handled, they bite only to eat and to defend themselves from wasp species, mantids and centipedes — and us. A black widow bites with tiny appendages called chelicerae, about 1 mm in length.

The southern black widow, the one I saw, is considered to be the most venomous spider in our region. The primary component in the black widow’s venom that causes extremely painful reactions is called alpha-Latrotoxin. In the bodies of vertebrates, this toxin affects the metabolism of calcium and other minerals at nerve endings. Black widow venom is being studied by researchers at the University of Massachusetts and elsewhere to determine the genetic properties of the toxin for possible medical benefit. As with some other venoms, spider venom may have a useful medical role in blocking nerve channels and as an anticoagulant. It is also essential in developing effective treatments for spider bites.

These are beautiful, fascinating creatures, but they are also quite dangerous. If they do bite you, they can cause extreme pain, difficulty breathing due to muscle cramping and, although rare, possible death in infants, the elderly or those with compromised immune systems. If you think you have been bitten, seek medical attention promptly; bring the spider with you if possible, to help get the best treatment.

Most of us would prefer to observe black widows from a safe distance, or not at all. For my part, though, I’m grateful I had the opportunity to observe one up close and learn more about them.

Jessica Schultz is Communications and Capital Project Coordinator at Hitchcock Center for the Environment.

One response to “A black widow appears”