A bluebird house offers a lesson in environmental ethics 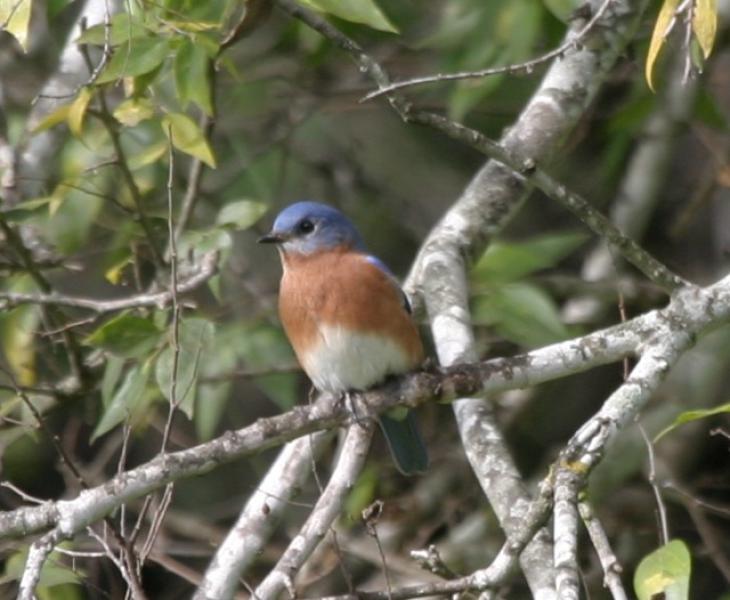 It was a sunny day in mid-May. Our small group of fifth-and-sixth-graders walked quietly along the farm road with our eyes glued to the nesting box on the last tree. The students were uncharacteristically quiet. As we got closer, a female bluebird flew from the entrance hole. Everyone looked excited! When we reached the box I opened the cleanout door and slowly looked inside. There, huddled in the nest, were five baby bluebirds — eyes open and pin feathers bristling on their dark gray skin. I relaxed a little, seeing that the nestlings weren’t old enough to be spooked out of the nest prematurely — they didn’t have enough feathers to fly away.

We had previously talked about the parasitic blowfly that lays eggs in bluebird nests, timed to emerge when the young bluebirds are full of blood to feed the fly maggots.

Some students held the young bluebirds while others removed the old nest and maggots, replaced the nest with clean dry grass and shaped it into a nest-like cup.

Then we carefully replaced the nestling bluebirds and collected the old nest for further examination. As we walked away from the box we all felt proud of helping the bluebirds in their journey toward fledging.

Two weeks later we approached the box again. The students were completely silent, anticipating what we might find. As we very slowly and carefully opened the box it became clear that it was empty. All we found inside was the little grass nest we had made before, plus some bird droppings, and almost a quarter inch of feather “dust.” I asked the students what the dust was and they finally came up with dried skin. I explained the process of pin feathers splitting to release the full feather and the sheath disintegrating into this dust. This, together with the undisturbed nest, indicated to me that the birds had successfully fledged. We celebrated five new baby bluebirds joining the world.

As we removed the old nest to ready the box for its next brood, I noticed some new grasses had been added to the grass cup we had made. Meanwhile I heard a male house sparrow chirping vociferously in the tree above. I surmised it was sparrows that had begun making a nest in the empty box, and sat the group down and told them what I thought was happening.

Several years ago at my house in Deerfield, a pair of bluebirds built a nest in a similar box and laid five eggs. There were house sparrows in the area. One day I went to check the box and found the female bluebird sitting on her nest, dead with the top of her head pecked in. I knew that house sparrows were capable of doing this. I was devastated and furious, especially since the house sparrows already had an active nest in a box down the driveway.

I told the group we had a decision to make. What do we do with the house sparrow nest? Several students had strong thoughts and arguments broke out. “House sparrows are killers; we should kill them. … The bluebirds are gone. Why not let the house sparrows alone to raise their young? … But more house sparrows will mean more to harass and maybe kill future bluebirds.” I explained that I saw this as a moral dilemma, involving values and even life and death. I did this in a light tone but let them know it was a serious discussion and that we would probably not all agree.

After a while I suggested taking a vote. Should we close the box and allow the house sparrows to continue nesting? Or should we prop the box open which, I surmised, would prevent the sparrows from continuing their nest? I asked whether everyone would be OK with majority rule, even if they were in the minority. The students agreed. The vote was six for closing the box and three for leaving it open. We closed it and started back toward school. Those in the minority continued to argue their case loudly and strongly.

As we walked away from the box, one student looked thoughtful and then announced that she had changed her mind. So I called for another vote and this vote was three for closing and six for leaving it open — just the opposite decision. We returned to the box, propped the door open and walked away.

The students were unsettled as we returned to school. They continued to discuss the issues in small groups. I encouraged them to look at their own opinions: Is one bird better than another? Is it OK for humans to kill one bird to save another? What started out as a lesson in bird nesting behavior had become a real-world experience in making ethical decisions and acting on one’s convictions. It was also a lesson in listening across differences and coming to agreement when faced with strong differences of opinion.

The experience reminded me that, although nature is ethically neutral, our interaction with other species — sometimes favoring, sometimes hindering them — provides opportunities for each of us to examine our own values as we make such decisions.