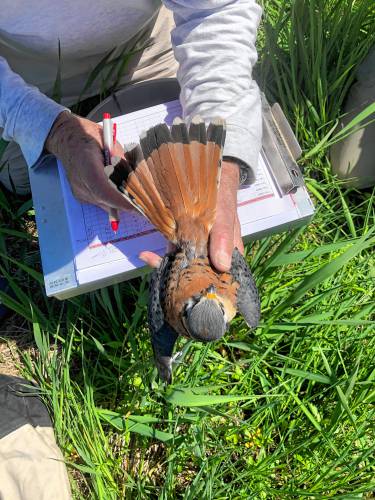 An adult male kestrel whose tail is being measured, part of conservation efforts in the Valley Kestrel Land Trust Photo

I peered through my binoculars at a large wooden nest box. It was perched atop a tall pole in the middle of a grassy field between the Hitchcock Center and the Hampshire College Farm. I was hoping to spy the rusty brown body or sharp black and white facial markings of the nation’s smallest falcon, the American kestrel.

Nothing. I scanned the field for the hummingbird-like hovering of the falcon hunting for insects, reptiles, or rodents. Nope. Nor was one bobbing its tail on any nearby perch. Discouraged, I put down my binoculars. This was the fifth time I’d looked without success. “I just don’t think they’re here,” I thought.

The population of North America’s most widespread falcon, the American kestrel (Falco sparverius) has been declining for decades. Here in New England, that decline has been most severe. Between 1966 and 2015, the bird’s numbers dropped by 50 percent, according to the North American Breeding Bird Survey. Ranging from Alaska to Central America, kestrels’ preferred habitat is grasslands, farmlands, parks and other open country. They nest in such places as cavities in dead snags, old woodpecker holes and rock crevices. They often prefer to be right in the middle of a field — an increasingly rare phenomenon as farmlands become either developed or reforested, and as farmers develop so-called “clean” farming practices, including removing hedgerows and trees. Kestrels’ decline may also be traced to environmental toxins, which reduce clutch size, decrease hatching success and reduce the quantity of available prey. 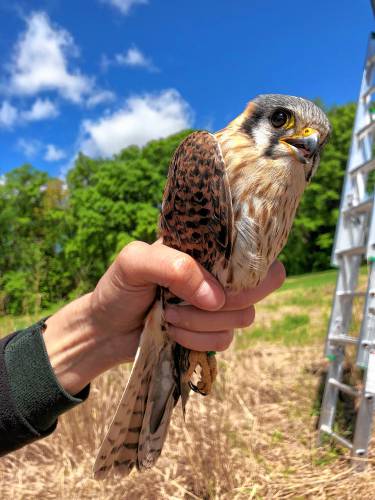 An adult female kestrel who has just been banded, part of conservation efforts in the Valley. Kestrel Land Trust Photo

These small raptors, about the size of mourning doves, don’t create their own nest holes. Instead, they use other birds’ old nests; they may on occasion remove songbirds from desirable nesting sites. Chris Volante of the Kestrel Land Trust, a land conservation organization in Amherst, told me that one observer saw a kestrel physically eject a starling out of a nest box before using the box itself. (Don’t feel too sorry for the starling, however; it is a highly invasive species from Europe.) Kestrels are likely to return to the same area year after year: The Raptor View Research Institute in western Montana found that 33 percent of more than 190 kestrels banded since 2011 returned to the study site.

To bolster our local population, the Kestrel Land Trust has been working with the U.S. Fish and Wildlife Service, MassWildlife and other organizations and individuals to place and monitor nest boxes in protected grasslands. According to Volante, the idea arose in 2012 when Kestrel helped conserve a 32-acre parcel of land at the Fort River Division of the Silvio O. Conte National Wildlife Refuge in Hadley. While walking through the area, Kristin DeBoer, Kestrel’s Executive Director, and wildlife biologist David King of the U.S. Forest Service realized in a flash of inspiration that they could place kestrel nesting boxes on the protected grasslands, where there was no risk of development. That winter, the first 12 boxes were installed.

Similar ideas have cropped up elsewhere across the state. The Massachusetts Department of Transportation, MassWildlife, the University of Massachusetts and others teamed up in 2013 to create a partnership called Linking Landscapes for Massachusetts Wildlife, which installs nest boxes on the backs of highway signs and in other rights-of-way with suitable habitat.

Since 2013, the Kestrel Land Trust’s project has grown to 20 boxes. These boxes, in which kestrels are monitored, measured and banded with ID tags, have supported 19 kestrel pairs that have produced 79 chicks, with a high of 28 chicks in 2017. In addition to the original site, the project now includes other protected areas such as the Hampshire College Farm Center and the Amherst College Wildlife Sanctuary. 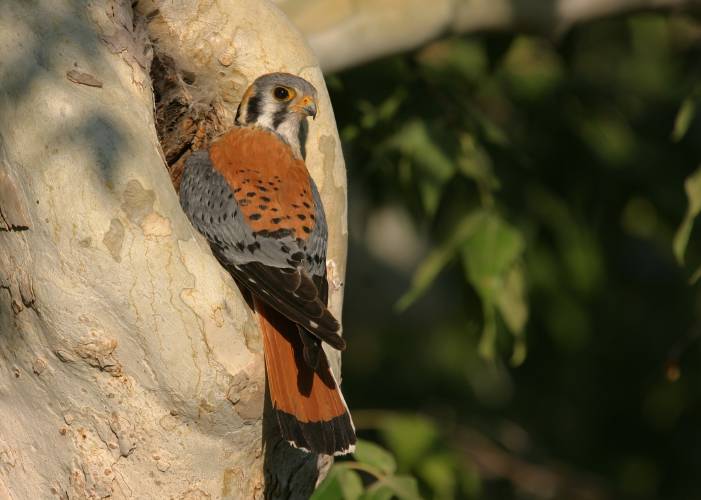 In a 2017 appearance on WGBY, Chris Volante explained the importance of this effort. “For us, it’s a win-win project,” she said, “because not only are we helping a particular species on protected lands in the area that we had a role in protecting, but we also get to work with a lot of great partners… who are involved in the same kind of work — and also get to involve the community in a project that’s very exciting and rewarding for them.”

Kestrel now has 20-30 volunteer box monitors who spend an hour a week watching for kestrel activity. However, observations can be tricky. When multiple nest sites are available, observers can have difficulty determining which, if any, is being used. Other species also frequently use the boxes, for nesting or just for perching. Additionally, kestrels will, on occasion, simply disappear. However, sometimes this is because the female is laying her eggs — which is exactly what happened in the case of “my” nest box. When the Kestrel team recently photographed its contents, the camera revealed a clutch of several eggs, even though observers had only sighted kestrels in the area twice before.

So, with renewed vigor, I will train my binoculars on the nest box and wait; once the eggs hatch, there will certainly be an increase in activity with all those mouths to feed. As Volante says, “I never get tired of seeing that new life and realizing that the birds are succeeding in their main task in life, which is to make more birds.”

Reeve Gutsell is the Food, Farm, and Sustainability Program Coordinator at the Hampshire College Farm. She is also a volunteer at the Hitchcock Center for the Environment. She has a masters degree in resource management and conservation from Antioch University, and a masters in creative writing from Naropa University. The Kestrel Land Trust is not specifically focused on preserving kestrels; it is a land conservation organization. To learn more about Kestrel, visit kestreltrust.org.