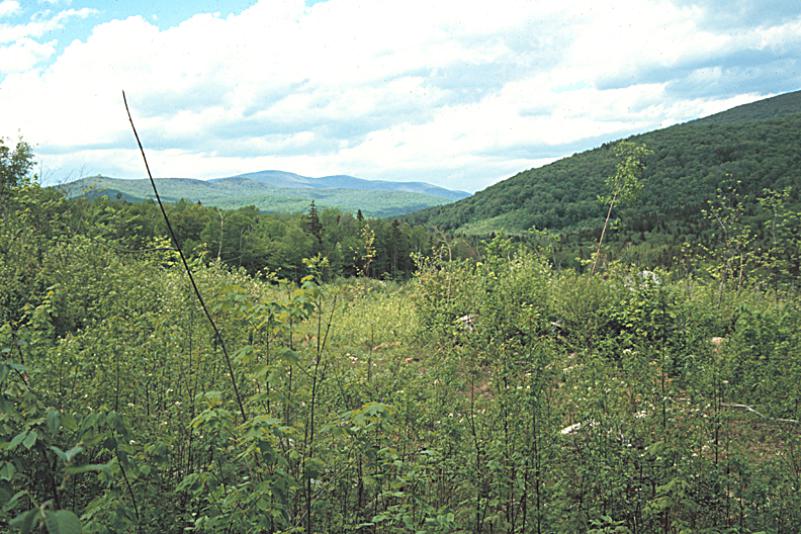 PHOTO BY DAVE KING
A clear-cut in the White Mountain National Forest, where chestnut-sided warblers and other songbirds have established nests in cleared areas like this one.

Forest management is often the subject of controversy, yet often the anger and anxiety of opponents are due to misconceptions or incomplete information. I hope that by describing the effects of forestry on wildlife and biodiversity, I can help allay some of the concerns that arise from such misconceptions.

Forest fragmentation might be a good place to start.

As a graduate student in California I was schooled on all the literature from the Midwest and mid-Atlantic describing the isolation of “forest fragments” by agricultural or residential habitats and how they negatively affect forest birds. I was also perhaps a little overexcited by the controversy at Humboldt State University in northern California about the continuing liquidation of that region’s ancient forests.

When I arrived back in New England, I was eager to test whether the clearings created by forestry here caused the same sort of damage that resulted from forest fragmentation or logging of old growth in the West.

During two years of detailed study in the White Mountain National Forest, I found that nesting success of forest birds was slightly lower near clear-cuts than the forest’s interior, although not so low as to threaten the birds’ populations. This was largely because logged areas in the Northeast are still forest. Birds within a landscape managed with forestry aren’t subject to the rates of predation by house cats and brood parasitism by cowbirds that occur in truly fragmented landscapes. Also, more than 90 percent of the forest around my study sites was old enough for forest birds to nest in. On average, about 97 percent of New England’s forests are at this stage, suggesting that the effects of logging on forest fragmentation are regionally of little consequence to these species. It is important to note as well that the forest that was being cut was not old growth, which is so scarce in our region that I can’t imagine a justification for harvesting it.

Needless to say, I was somewhat surprised that a practice that appeared so destructive was actually relatively benign at the population level. In other words, although individual birds might be displaced by logging, it is not enough relative to the size of the population to threaten the viability of the species — which from the perspective of conservation is the meaningful measure.

The evidence of my own scientifically collected data, as well as the published work of others, indicates that modest levels of logging in forested landscapes in New England does not threaten forest bird populations. This is because the effects of forestry in the region are relatively benign, especially compared to conversion to non-forest uses, and also because extensive tracts of forest are off limits to active management.

During my work in the White Mountains I had another startling revelation: the amazing amount of activity in the regenerating clear-cuts. Right after harvest there is not much to look at in a clear-cut — mostly just stumps and branches — but about five years later these sites are thick with wildflowers, brambles and seedling trees, and by this stage they have become populated with a variety of bird species that live only in recently disturbed forest and are unable to live in closed-canopy mature forest.

I learned that more than 75 percent of these “shrubland” species have shown long-term declines on the North American Breeding Bird Survey, compared to about 20 percent of mature-forest birds. People argue this decline in shrubland species is due to reversion of agricultural land to forest, but many shrubland bird populations are not secure anywhere in their range, and every state in the East has shrubland birds identified as a group in need of conservation action. Shrubland, or “early successional” habitats benefit other species too, including native bees, which are many times more abundant in recently harvested forest than in mature stands.

Finally, recent studies have highlighted the use of regenerating clear-cuts by mature-forest birds, probably because clear-cuts have more fruit and higher insect abundance.

These foods are important to adult birds molting before migration and to fledgling birds that need to grow and fatten for migration. In fact, a recent study showed eight of the 10 most common forest birds were more abundant in shrublands than forest during the late summer when they are raising their newly fledged young.

I was recently walking in the forest near my house admiring the stately expanse of the giant oaks against the sky. I love that forest and its big trees, but now when I see a good logging job with a few acres of open ground I see more than just stumps. I now imagine that site ringing with the songs of chestnut-sided warblers and humming with the sound of native bees, if only for a short time before the forest grows back and the cycle of disturbance and renewal starts again.

Dave King is a wildlife biologist and naturalist who lives in Amherst.