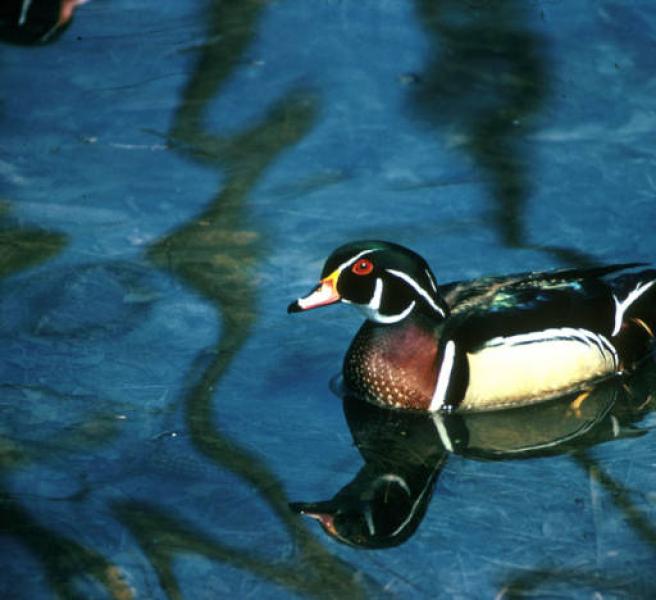 In the late winter or early spring I usually see my first wood duck of the year. “First of year,” the first individual of a species seen in a given calendar year, is a concept particularly important to those who keep year lists of species. Even for someone like me who does not keep such a record, the first spring sighting of an especially striking bird is noteworthy, and the wood duck is striking indeed.

Many people consider the many-colored, subtly patterned wood duck to be one of the most beautiful ducks, and it is kept in parks around the world as a sort of aquatic peacock. Native to wooded North American swamps, this bird nests in cavities in trees, and, although it eats a wide variety of foods, its predilection for eating acorns has given it one of its folk names, “acorn duck.” I often see my first wood duck of the year on my commute as I drive through Longmeadow on Interstate 91. Even at high speeds (both mine and the bird’s) a glimpse of its long, rectangular tail is often evidence enough for me to identify the bird in flight.

The wood duck’s tail, relatively long for a duck, is a convenient field mark for human observers, and that tail is marked as a key to identification in field guides. More importantly, the tail is an adaptation for flight in a forest. A duck that navigates at high speed among crowded trees and lands at nest holes needs a more precise steering mechanism than does a more typical duck whose flight is largely over open water and whose ground nest can be reached by waddling ashore. The wood duck’s tail gives it a good rudder for precision maneuvers through the woods.

This unconventional duck nests in cavities — holes produced by fungal rot of trees where branches break off, old nests of large woodpeckers and, in recent decades, artificial nest boxes. Natural nests average about 15 feet above the ground. The only improvement that the wood duck makes to the nest is adding down plucked by the female from her own breast. The female lays about 11 eggs per nest. About a day after hatching, the young respond to the female’s “kuk, kuk, kuk, kuk” and jump from the nest to the ground, where they follow her, sometimes a mile or more, to appropriate wet habitat rich in the insect food they need for growth. It takes about two months to reach adult size and the flight needed for southbound migration in the fall.

Driving on a highway between Springfield and Hartford is hardly a wilderness experience, but my sighting of these small ducks here is a result of a century of efforts no less important and interesting than those that have returned condors to the Grand Canyon or wolves to Yellowstone. The wood duck is now common across a large part of the lower 48 states and parts of southern Canada, but a century ago there was concern that the species might be on its way to extinction. Draining of wetlands and especially unregulated overhunting had brought the population of this species quite low.

Bird protection legislation and careful regulation of hunting have enabled wood duck numbers to rebound over the past century. Also important has been the preservation of wild or semi-wild land, such as the Fannie Stebbins Wildlife Refuge abutting the highway where I see these wood ducks.

Habitat conservation comes about because people have learned to value land and its natural inhabitants, and protected land, in turn, provides opportunities for environmental education. The Stebbins Refuge was purchased by the Allen Bird Club in 1952, with funds raised from private donations, and named for the woman who, as supervisor of elementary school science for the Springfield public schools and a founder of the bird club, had contributed much to increasing knowledge of nature in our region. This refuge protects several habitats, including floodplain forest, which, as mentioned in the March 15 “Earth Matters” column by Elizabeth Farnsworth, is important not only for wood ducks, but for many species of plants and animals.

There are many ways to participate in the preservation of species like the wood duck while honoring the educational legacy of Fannie Stebbins, the foresight of those who bought and protected the refuge named for her, and the generations of wildlife biologists who worked to maintain and increase the wood duck population. Of course, contributions to land trusts and environmental education organizations help. It is also important to get outside to enjoy and learn about wood ducks and the rest of our plants and animals, especially if you can share that experience with a young person. After all, conservation efforts like the ones that saved the wood duck can continue only if there is a new generation to take up the challenge.

David Spector is a former board president of the Hitchcock Center for the Environment and teaches biology at Central Connecticut State University. On Thursday, April 11, he will give a talk at the Hitchcock Center on Margaret Morse Nice, Amherst native and pioneer in the study of bird behavior (see column of April 2, 2011. More information is available about the Fannie Stebbins Wildlife Refuge.