By David  Spector For the Gazette

Among the wildflowers now twinkling along New England roads are many species of asters. As with other plants in the daisy family, each aster “flower” is a composite of dozens of tiny flowers, called florets, of two types.

Radiating outward, long petals of white or purple ray florets first draw attention. In the center, many yellow or magenta disk florets fill a small circle. The exact colors of the disk florets differ among our local aster species; one field guide author with a metallic bent describes the two colors as gold and bronze.

Although ray petals on an individual aster plant are similar in color, both yellow and magenta center disks are often present on one plant. Watch the same flowers over several days and you may see yellow disks become magenta, with color change typically occurring first in the outer ring of disk florets and moving toward the middle. 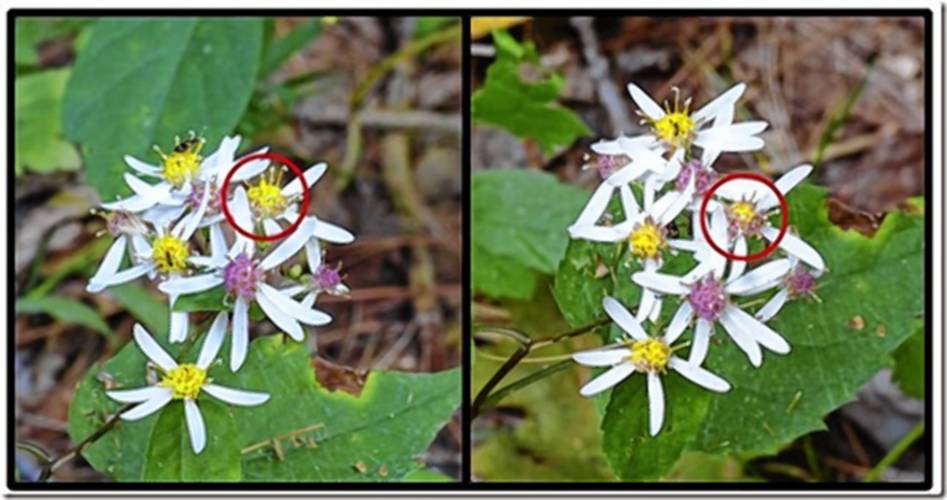 These photographs were taken one day apart. On the top image, the outer disk florets of the top and bottom flower heads have started to change from yellow to magenta, while the disk of the upper right flower head (circled) has gone from mostly yellow to mostly magenta. DAVID SPECTOR

Flower color change occurs on many plants and raises interesting biological questions, many unanswered. How do disk florets switch from yellow to magenta? Georgetown University botanist Martha Weiss found that aster disks change color by adding anthocyanins, a group of pigments responsible for many of the reds, blues or purples in plants.

For some species, other pigments are involved. Some plants’ flowers, like those of the asters, gain pigment, while others lose pigment.

Another question concerns the impetus for color change. Some flowers are internally programmed to change on schedule, while in others, pollinators may induce change by removing nectar or pollen, depositing pollen or simply touching the flower. As far as I know, the experiments have not been done to determine whether these asters are scheduled or inducible in their color changes; this is a project awaiting a careful naturalist.

Biologists wonder about the history of a trait. Flower change is a widely scattered trait among living groups of flowering plants, and some include species that change color and are closely related to ones that don’t. These observations suggest that the ability to change flower color has been gained (and perhaps lost) multiple times in the history of plants.

The diversity of mechanisms of flower color change in various species is further evidence for many independent origins of this characteristic.

What good does it do? The repeated evolution of this trait and its cost (production of new pigment) for some species indicate that the plant benefits. Because flowers are reproductive structures, the color change is almost certainly involved in facilitating seed production.

Scientists need much more research on many more species before they know exactly how flower color change benefits different plant species as they communicate with their pollinators.

Some advantages have been suggested but not yet verified. For example, maintaining a large display of visually obvious flowers after some flowers have been pollinated (e.g., by asters’ keeping prominent ray florets) can attract more insects and birds to a plant, but risks discouraging those pollinators from remaining or revisiting if they get no reward. Signaling which flowers no longer offer nectar or pollen (e.g., by asters changing disk floret color) can allow pollinators to focus on flowers that provide food and that still need pollen.

That description of possible advantage still leaves much to explain. Why do many species change flower color, while other plants do not? Plants with stable flower color might not need to signal different stages of flowers to their insect or bird visitors, perhaps because they are in environments with more than enough pollinators consistently available.

Why do some species change colors on schedule while others need some trigger to change? Again, the predictability of pollinator visits is probably part of the answer. The visual sensitivities and learning abilities of various species of pollinators also affect evolution of flower color change in the plants that they pollinate.

Emily Dickinson wrote that asters have “everlasting fashion — set.” Poets and scientists both use close observation, but both sometimes miss detail. Science corrects itself with generally more accurate descriptions of nature, and as scientific understanding improves, poets change their natural imagery. I anticipate poems about floral fashion that mention changing, not “set,” asters.