A fern that climbs into the Ivy League

The word “fern” comes from the same root as “feather,” but not all ferns have feathery fronds. One of our local ferns could easily be mistaken for an ivy. The well-named American climbing fern is an evergreen fern with small hand-like “leaflets” (the technical term is “pinnules”). The leaves of this fern climb and wrap themselves around other plants, a habit that makes them resemble ivies and other vines of flowering plants. 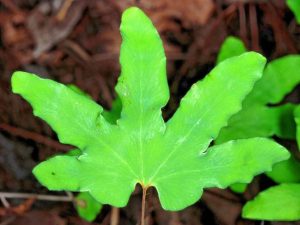 Here in southern New England, we are near the northern edge of the range of this species, but it occurs locally in patches. The fern can be seen reliably year after year at the same locations, standing out in winter when most other plants have faded. Watch for it in edge habitat, especially near water.

The fern’s scientific name neatly describes its appearance. The genus name Lygodium, from a Greek root, refers to the flexibility of the plant as it twists around its supporting plants, and the species name palmatum is based on the leaf segments’ resemblance to an open hand.

As with many species, it has had many English names: “Alice’s fern” and “Watson’s fern” presumably honor individuals somehow associated with the plant. “Snake-tongued fern” and “creeping fern” refer to the same viny lifestyle as “climbing fern.” Of local interest are the names “Windsor fern” and the widely used “Hartford fern,” which refer to the plant’s former abundance in the Connecticut River Valley, especially in Connecticut.

The large populations of American climbing fern in Connecticut were heavily harvested in the mid-19th century for use as home decoration. Commercially gathered ferns were sold by street peddlers in cities, and the wild populations declined. The popular craze for ferns at that time had amateur botanists collecting ferns for their herbaria, people growing ferns in glass containers in their homes, and decorators using both natural ferns and drawn or carved fern motifs in many settings. The fern fad even had its own fancy name — pteridomania.

In 1869, the Connecticut legislature responded to concern about overharvest by outlawing the collection of this species without permission of the landowner. Some landowners, though, still allowed gathering the plant, and it continued to be available for purchase.

Today the American climbing fern is much less common than it was. What has caused its decline? It’s difficult if not impossible to know which factor or factors — commercial collecting, loss of habitat due to agriculture and urbanization, and draining of wetlands — are responsible.

At a time when our native climbing fern is in decline, two closely related Old World tropical species of climbing fern that were introduced into the southern United States as ornamentals — Old World climbing fern (Lygodium microphyllum) and Japanese climbing fern (Lygodium japonicum) — have become invasive. These introduced species can severely alter native plant communities. As of now, there is only slight overlap between the ranges of the native and the invasive climbing ferns. As the introduced species become more established, and as global warming allows them to move farther north, there may be more interaction between the North American and introduced exotic ferns. In addition to the invasive character of the exotic species, another concern is that insects or other organisms introduced to control the invasive species might also affect the native plant, with as yet unpredictable effects on its ability to survive.

If you take a walk in the woods this winter, keep an eye out for this unusual fern, looking like ivy. If you do spot it, you can remind yourself of the history of commercial exploitation of the species and later legal protection. Consider how a single plant offers a window into the complex concerns of conservation biology. This winter I will visit “my” populations of American climbing fern, one of my favorite plants, and I hope that you have the opportunity to find your own.