A natural case of apparent conflict of interest

By David Spector for the Gazette

If you sit on a city park bench you’re likely to see birds, especially house sparrows. This species, native to Europe and Asia, was first introduced into North America in 1851 and is now common where farms or cities provide both grain on the ground and nest holes. As such, it provides easy observation opportunities. In breeding season you may observe a common behavior — one sparrow feeding another — that raises interesting evolutionary questions.

Each organism is in competition with all other members of its species to get copies of its own genes into the next generation. Why, then, are birds (and other animals) so often observed helping 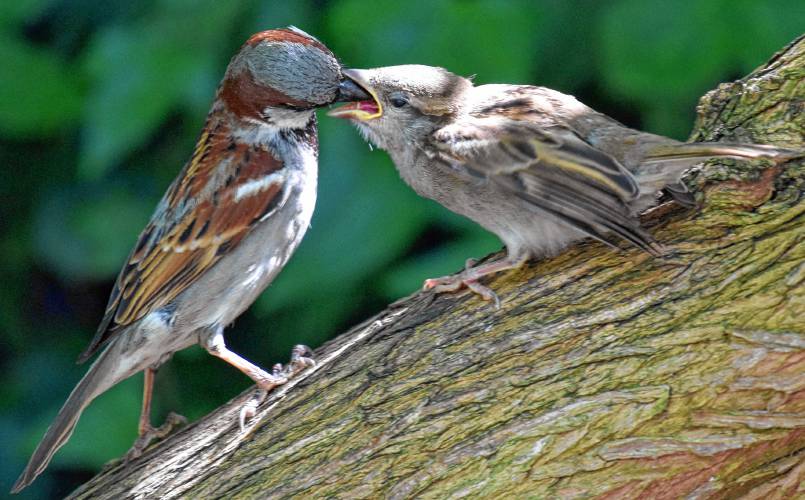 A male house sparrow, note the black bib on its neck, feeds a fledgling. HEATHER SMITHERS VIA CREATIVE COMMONS

each other, for example, by giving food to another individual? Over the past century and a half biologists have proposed numerous scenarios for the evolution of helping behavior. A closer look at the sparrows illustrates one of the simplest of these explanations and the one most likely to have the widest application.

The sparrow being fed is typically a young bird, recently out of the nest — a fledgling. It can usually be recognized by such details as a shorter tail, a slightly fuzzier appearance, and a wide mouth with soft yellow tissue at the mouth’s hinge. Usually, the house sparrow seen doing the feeding by the park bench is an adult, and the bird that’s fed is a fledgling, most likely the offspring of that adult.

A parent and its offspring share about half of their genes, so they can be considered to be half the same. A parent helping its offspring, such as a sparrow feeding its fledgling, increases the chances that copies of its own genes will get into subsequent generations. A sparrow that feeds its chicks might have more surviving descendants in subsequent generations than would a sparrow that lets its young fend for themselves.

Watch carefully as a young sparrow peeps, follows an adult and begs for food. The parent doesn’t always respond immediately. Indeed, as a fledgling ages, the parent increasingly refuses to provide food; about a week to ten days after the young bird left the nest, parental care usually ends. If it’s beneficial to feed offspring, why stop?

Because a parent and offspring share only about half their genes, their interests are not identical. Time and energy spent on offspring is time and energy that a parent could put into its own survival towards its next round of reproduction. When a sparrow can start another nest (and house sparrows nest as many as four times in a breeding season) there is a direct conflict between care for current offspring and production of future offspring.

The logic described above, which became known as “kin selection,” was given a formal explanation in the 1960s by biologist William Hamilton, who showed that kin selection can be understood in simple mathematical genetic terms. Helpful behavior is likely to occur when the benefit to the recipient (e.g., increased survival of and eventual reproduction by a fed fledgling sparrow) times the likelihood of sharing a copy of a gene by relatedness (e.g., one half for a parent and offspring) is greater than the cost to the donor (e.g., a parent sparrow delaying its next nest and thus having fewer offspring). Benefits and costs in this kind of analysis are ultimately measured in terms of impact on potential reproduction and thus numbers of copies of an individual’s genes in future generations.

“Hamilton’s Rule,” can be presented algebraically as helping behavior is favored when rb>c, in which “r” is relatedness, “b” is the benefit to a recipient of help, and “c” is the cost to a donor of helping. This expression offers a possible explanation for observations of many helpful behaviors. Hamilton’s discussion triggered the growth of the study of helpful behavior, both kin selection and other routes to helping.

Notice that the adults feeding the young house sparrows are mostly males (identified by black bibs on the throat and upper breast). The benefit to a young sparrow is the same, whether fed by a father or by a mother. The father and mother each have nearly the same genetic relatedness to an offspring. The cost, though, is different. A female house sparrow that feeds her offspring after they leave the nest spends less time feeding herself and building the nutrient reserves she will need to produce another set of eggs and to do the majority of incubation on the next nest. Prolonged maternal care, then, means a delay in subsequent nests and, ultimately, fewer offspring for the female.

Charles Darwin famously invited readers of his 1859 “Origin of Species” to consider a tangled stream bank, “clothed with many plants of many kinds, with birds singing on the bushes, with various insects flitting about … and to reflect that these elaborately constructed forms … have all been produced by laws acting around us.” Biologists still explore these laws, and one need not go to a wild stream bank to observe them. If we watch closely, a simpler setting of a park bench with house sparrows feeding on crumbs can provide ample illustration of some of those laws.