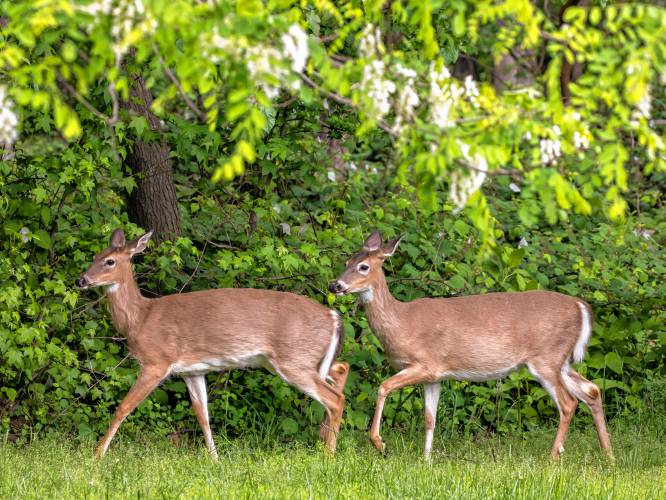 Some months back I talked with a friend about the challenges of growing vegetables in the Pioneer Valley and ways to deal with deer and woodchucks. Despite all attempts at fencing and repellent, entire sections of her garden were destroyed — just too many hungry mouths, leaving little for her family.

I was reminded of the 1980s, when a decision to patch-cut the forest at the Quabbin Reservation led to a proliferation of browse and an explosion in the deer population. Walking with my students around the reservoir in those years we saw little or no undergrowth, and no tree seedlings. As told in Jan Dizard’s book “Going Wild,” this problem brought together conservationists, animal rights folks, bird watchers and hunters who worked out a plan for an annual deer hunt in the Quabbin.

Carefully controlled hunting successfully brought the deer herd down from about 60 animals per square mile to a sustainable 10 to 15. Within a short time, the understory grew back and tree seedlings began to survive into saplings, ready to provide trees to fill gaps as overstory trees died or were felled by storms.

The land outside the Quabbin Reservation is also ideal habitat for deer. Small agricultural fields surrounded by woods, and houses with yards and gardens near to disturbed forest edges, provide young saplings for browse and more mature evergreens for cover. Our decisions to manage forests, grow food and live with large suburban lawns, combined with the eradication of predators, are not wrong per se — but these choices have consequences. As an ecologist and teacher, I often used human impacts on forests as case studies. Now I began to wonder if I might take a more active role.

Although one more deer hunter isn’t going to eliminate my friend’s garden difficulties, might I locally begin to shift the balance? I also have wanted to take more direct responsibility for the meat I consume. I could move to a more rural part of the Commonwealth and raise animals for meat or join a local meat CSA. But then I would continue to contribute to the ecological consequences of farming. Taking deer from nearby woods is about as local as I could get, completely natural and organic.

My happiest times as a boy were spent with my mother’s father learning to hunt and fish, and to properly handle and care for his guns. With my grandfather (a professor of agronomy) and my mother (a writer and engineer) teaching me, I first became fascinated with the natural world, a pursuit that led me to a career. What would it mean to return now to the field as a hunter, in the context of modern gun and big game hunting controversies, and dense settlement patterns in the East? It feels like the naturalist and hunter communities have little in common.

Yet people with very different perspectives on wildlife can find common cause. Hunters and naturalists both value the quiet and solitude of woods and fields, and the chance to observe nature closely. Neither can pursue their passions unless we conserve and preserve habitat as well as animal and plant populations and clean water. Private hunting groups, such as Ducks Unlimited, and public money through targeted excise taxes, have been crucial to setting aside wetlands and forests.

Much federal protection pertains directly only to game species, but there are significant collateral benefits whenever one protects a significant link in the food chain. Protected wildlife management areas that are co-extensive with un-hunted nature reserves can create effective wildlife corridors around denser human settlements.

Reducing the size of the deer herd can have public health benefits, especially regarding tick-borne disease. Following elimination of all deer from Monhegan Island in 1996-1999, black-legged ticks became scarce, if not completely absent, by 2007 and tick-borne disease was practically nonexistent. In Mumford Cove, Connecticut, controlled hunts in 2000 reduced deer density from 100 per square mile to 10 to 12, and Lyme disease incidence dropped from 30 cases (physician-diagnosed rash) per year to 2 to 3 within three years.

Hunting has developed a bad reputation in some areas because of bad hunter behavior. I recently completed the MassWildlife Basic Hunter Education Course, one requirement for obtaining a firearms permit. Hunter education, funded mainly by taxes on guns, ammunition and other hunting and fishing supplies, continues to be a central strategy in the ongoing effort to teach good hunting behavior. Our teachers were experienced hunters and managers, and wildlife biology professors.

The course was detailed and thorough. I was pleased to see how well my grandfather had taught me. His hunting ethics were imprinted in me at a young age and square perfectly with the Rules of Fair Chase. From him and from my Boy Scout merit badge instructors, I had proper gun handling pounded into me.

I have located a private landowner who would welcome my efforts to reduce the local deer herd. Meanwhile, I will be harvesting my own meat. I am permitted and able to purchase an appropriate firearm and ammunition and buy a license. I am clear in my own personal ethics and look forward to continuing this experiment in admittedly modest self-sufficiency and ecological management — we shall see.

Lawrence J. Winship is an emeritus professor of botany at Hampshire College. The revised edition of “Going wild: Hunting, animal rights, and the contested meaning of nature” (University of Massachusetts Press, 1999) by Jan Dizard is available at local libraries and bookstores.