A naturalist mows the lawn 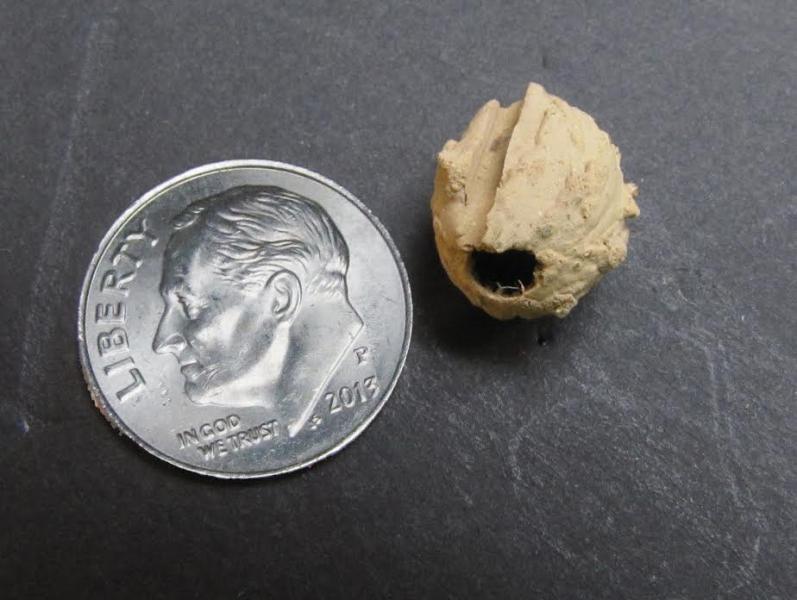 PHOTO BY REBECCA REID
A potter wasp nest. The nest remained in the author’s lawn because he carefully mowed around it, allowing the new wasp to complete its development. The picture shows the groove left by the grass stem and the escape hole made by the emerging young wasp.

Lawn mowing gets me thinking. I think about why I mow the lawn; the one-word answer that often comes to me is “wood.” Left alone, most New England soil eventually grows forest. Trees block views, threaten damage from falling branches and trunks, and shade out gardens. If I want open space I need to prevent woody plants from growing. I watch trees move in, ready to take over, both seedlings sprouting in the current year and tiny bonsais that have survived several years of mowing to become gnarled miniatures of the giants that spawned them.

Many trees waft in as tufted or winged seeds. Most of the airborne arrivals reflect local abundance of trees, with the colorful trio of white pine, black birch and red maple predominating. As I pull up seedlings, my hand may acquire the oil of wintergreen odor of the black birch or the stickiness of pine sap. A few species blow in from farther afield, especially in the June snow of cottony cottonwood seeds floating for miles from their tall parents. Larger seeds, planted by blue jays and gray squirrels that cache oak and hickory nuts in the lawn, often sprout into potential forest trees if not recovered by their buriers.

Mowing sparks thoughts about the relationship between grasses and other organisms.

Many grasses, unlike many other plants, respond to cutting with growth both upwards from tissue below the cut and to the side via underground stems. Species less resilient to mower injury may be crowded out by these grasses whose competitive abilities have been honed by millions of years of co-evolution with the teeth of grazing animals — teeth now being simulated by my mower’s blades. Some non-grass plants have similar methods for surviving mowing, in some cases also storing reserves for re-growth or for lateral spread in underground structures. For example, sheep sorrel often survives mowing with leaves close to the ground and, like lawn grass, can spread underground.

Although I don’t find sheep sorrel especially attractive, I appreciate that it is the larval food of the little copper butterfly I enjoy seeing as I mow.

Mowing is a form of gardening, choosing one set of plants over another, and choosing a short form of the selected plants. I choose flowers as I mow around clusters of likely- looking shoots. Sometimes I know and sometimes I don’t know what flower to expect from a young plant’s foliage. Either way I enjoy delightful displays that have included, among many others, milkweed, St. John’s wort, flat-topped and feather-leaved yarrow, glowing goldenrods, blue-eyed grass (a miniature iris, not a grass despite its name and appearance), and patches of maiden pink. Some flowers provide perches for birds like the eastern phoebes that hunt insects from goldenrod clusters. Sometimes I leave a patch of grass to grow tall and go to seed, offering food for turkeys that run their bills up each stalk, taking seeds and leaving zigzag stalks behind. Choices change; a flower welcomed for a few years can be targeted for mowing if it threatens to take over the lawn. My approach gives me more pleasure than would the suburban aesthetic of unchanging, closely cropped, grass-only lawns.

If someone else were hired to mow, the flowers would not be saved, I would not have the same opportunity to contemplate the ecology of this land, and I would miss much of what I see as I mow. Mowing has shown me frogs and snakes, moths and butterflies, and a family of baby rabbits each a bit smaller than my fist. Once, as I approached with the mower, I noticed on a grass stem a bit of mud, a fingernail-sized container built by an aptly named potter wasp. When I found this tiny pot, it still had an open hole through which its builder would deposit her egg and an insect. For weeks I mowed around that grass stem and watched. Not long after, I saw that the hole was sealed up.

Eventually I saw a new small hole produced by the young wasp that had gone through its larval stage feeding on the prey provided by its mother, reached adulthood and finally emerged. I have kept that wee bit of pottery for years — a souvenir and memory from mindfully mowing my lawn.

David Spector is a former board president of the Hitchcock Center for the Environment and teaches biology and English at Central Connecticut State University.