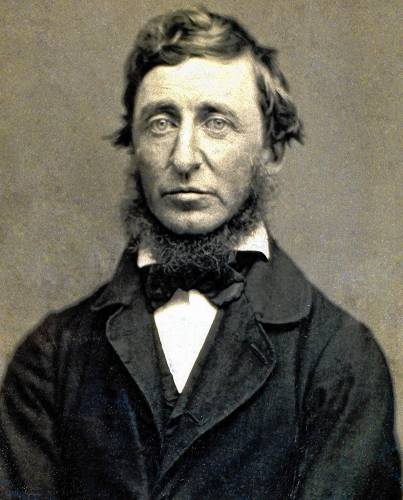 “I went to the woods because I wished to live deliberately, to front only the essential facts of life, and see if I could not learn what it had to teach, and not, when I came to die, discover that I had not lived.”
— Henry David Thoreau, “Walden”

July 12 marked the bicentennial of Henry David Thoreau’s birth. Though not widely read in his day, this essayist, abolitionist, naturalist, tax resister, land surveyor and native son of Massachusetts is now well known throughout America and the rest of the world for his influence on both modern-day environmentalism and civil resistance movements.

His two best-known writings are the book “Walden,” which documents and reflects upon his experiment in simple living at Concord’s Walden Pond, and the essay “Civil Disobedience,” which argues that an individual should act as his or her conscience dictates against the actions of an unjust state.

Thoreau was a protégé of Ralph Waldo Emerson, a proponent of Transcendentalism. Thoreau’s writings reflect Transcendentalist values of individuality, a belief in the goodness of people and nature, and a respect for scientific empiricism.

In “Walden,” what might otherwise have been an overly romanticized view of nature and life is tempered by Yankee practicality and a notable attention to detail. Describing his two years in a cabin on Emerson’s property at the edge of Walden Pond, Thoreau documents not only his more spiritual reflections on life but the nitty-gritty details of daily living. This includes everything from how to build a 10-foot by 15-foot cabin with two windows and a fireplace for $28.11½ to directions for making unleavened rye bread.

He also conducts very close observations of the natural world, including sounding the depths of Walden Pond, which had long been rumored to be bottomless. As the novelist John Updike said in a preface to the 2004 edition of “Walden,” “The Romantic Nature-celebrant wears the polished spectacles of Franklin and the philosophes. Thoreau’s purpose is to reconcile us, after centuries of hazy anthropocentricity, to Nature as it is, relentless and remorseless. We need to be called out from the shared comforts and illusions of village life.”

An early conservationist whose environmental thoughts have rippled in ever-widening circles through the centuries, Thoreau famously declared, “We need to witness our own limits transgressed, and some life pasturing freely where we never wander.” Humans are urged to recognize that “what we call Wildness is a civilization other than our own. In Wildness is the preservation of the World.”

Among the first Americans to read Darwin’s “Voyage of the Beagle” and “On the Origin of Species,” Thoreau applied the concept of natural selection to the Concord area, noting everything from when birds migrated to how fruit ripened. In his essay “Succession of Forest Trees,” he explains a theory of forest ecosystem succession in which early colonizing plants such as mosses and legumes eventually give way to a mature, fully formed hardwood forest — a process that occurs by the dispersal of seeds via wind or animals. This is one of the first systematic descriptions of succession.

His job as a land surveyor facilitated this environmental record-keeping process. His territory covered 26 square miles, and the documentation in his journals spans 24 years and contains over two million words. He worked on a never-completed “Calendar of Concord,” which endeavored to capture every natural history event in the Concord area.

Though literary critics dismissed his later essays as amateur science, the emergence of environmental history and eco-criticism in the 1970s led to a re-evaluation of this work.

It is unfortunate but fitting that Thoreau met his demise through the pursuit of the environmental science that he loved. Although he had long suffered from tuberculosis, one evening he stayed out in a rainstorm, counting tree rings on recently-felled stumps. This brought on a bout of bronchitis, which, compounded with the pre-existing tuberculosis, led to his early death at the age of 44.

He died in 1862, the middle of the Civil War, and no discussion of Thoreau can be complete without mentioning his other great work, the essay “Civil Disobedience,” originally published in 1849 as “Resistance to Civil Government.” Like “Walden,” this work sprang from the Transcendental belief in liberty and individual freedom. A passionate abolitionist and a conductor on the Underground Railroad, Thoreau was briefly jailed in 1846 for refusing to pay his poll taxes as an objection to slavery and the Mexican-American War. The resulting essay later greatly influenced such human rights activists as Mahatma Gandhi and Martin Luther King Jr.

Thoreau is now recognized as one of the most influential of all American authors. John Muir, the founder of the Sierra Club, kept a picture of Thoreau on his mantelpiece. King credited Thoreau for introducing him to the theory of nonviolent civil disobedience. Happy 200th birthday, Mr. Thoreau!

Reeve Gutsell is a volunteer at the Hitchcock Center for the Environment. She has a master’s degree in resource management and conservation from Antioch University. The next Earth Matters column will describe how Thoreau’s observations are aiding phenological studies.