A stream in the niche of time

There’s a tiny creek tucked into the Santa Lucia Mountains, in central coastal California. The valleys below burst with green lettuce and strawberries almost all year round, because the mild climate and rock-free soil favor agriculture. Rainfall is concentrated in a single season centered around the winter months from October to April, and during the rest of the year, farmers must rely on water stored behind dams in the mountains or, more commonly, groundwater. But in most years much more groundwater is pumped out of the underground aquifers than is recharged from rain. Drought years are even worse. It was here that we went looking for fish.

We searched along an intermittent stream with the foreboding name of Arroyo Seco (“dry gulch”) near the southern extent of the range for steelhead (Oncorhynchus mykiss). When this cold-water fish migrates out to sea as a juvenile and back to the headwaters as an adult to spawn it’s called steelhead trout. When it spends its entire life in the river without migrating, we call it rainbow trout. Fisheries scientists had been studying the unlikely persistence of this migratory form in streams that only occasionally connect to the Pacific Ocean. 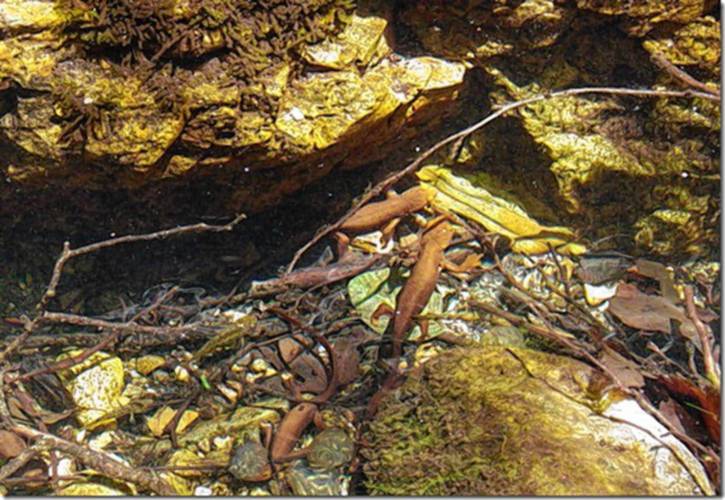 What are essential ingredients for fish survival in this inhospitable environment? First is water. During the wet season, rainfall (average 67.3 centimeters per year) fills the streams and percolates slowly into the aquifers through gravel and rocks. The dry season is very hot, routinely exceeding 35 degrees Celsius, or 95 degrees Fahrenheit. The only water in the stream at this time is groundwater baseflow. By late summer, accumulated heat, evaporation and groundwater pumping from the valley below exhaust the lowest reaches of these streams.

Water is a start, but these cold-water fishes are very unhappy at 23 degrees Celsius and die at temperatures over 25 degrees Celsius, requiring more oxygen until their heart can’t keep up with the demand. Colder water holds more oxygen, and fish in colder water require less oxygen. We set out to find a cold survival niche using a fiber-optic technique called Distributed Temperature Sensing (DTS) in Horse Creek, a chapparal-covered watershed that drains into Arroyo Seco. We selected a kilometer of stream that was (barely) accessible and wet; spanning the potentially viable habitat range from upstream bedrock pools down to a wide, bare, sunny channel. Colleagues had spent days carrying the fiber-optic cable on a home-made Cleopatra-like litter and spooling out a little at a time, tucking the cable down between the rocks where fish would be. I spliced the cable onto connectors, fired up the DTS, and looked at a kilometer of stream temperatures through the lens of a thin glass fiber.

I expected to see evidence of cool groundwater upstream, and steadily increasing temperature downstream as stream water interacts with the hot air. Sure enough, the upstream end showed a fish-pleasing 15 degrees Celsius (even in the middle of a hot June day), slowly increasing downstream, but not enough to bother the biota. We also saw something unexpected: In several areas under the dense shade of alders and oaks, the temperature seemed to decrease downstream. We set off to investigate. A large river meander had cut through an old landslide deposit, a feature typical of rapid uplift along this part of the coast. Near where the cooling began we found evidence of some water disappearing from the side of the channel and leaving a wet trace of green between the already yellow grasses on the bank. Farther down, we had an even bigger surprise. Cool water rejoined the channel from below and from the side and collected in deep pools against bedrock walls. In one of these, there was a frenzy of bright orange California newts. My colleague, David Boughton of the National Marine Fisheries Service, showed me opalescent gelatinous spheres, about 5 centimeters in diameter, stuck to several submerged sticks. 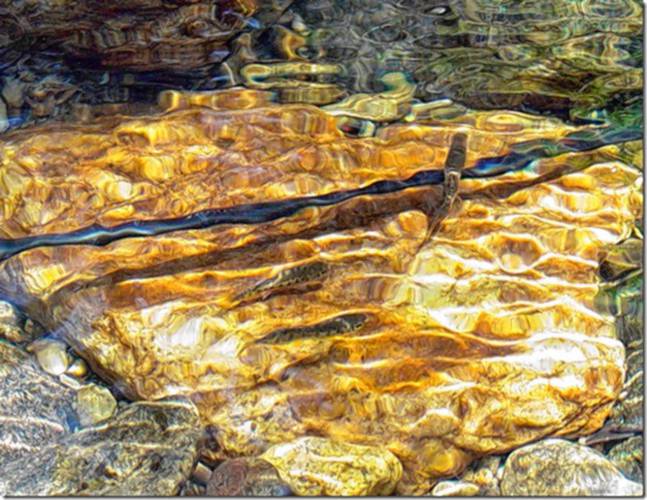 Left: Anadromous steelhead trout one-year-olds swim past a fiber-optic cable in Horse Creek, California. Temperatures measured along this cable with time help determine the thermal viability of this habitat over time. FOR THE GAZETTE/CHRISTINE HATCH

“Those are the newt egg masses. The adult newts who made them may prey on the steelhead eggs or newly-emerged fry,” he said with chagrin. “But that one-year-old is probably safe,” pointing to a long (about 10 centimeters) tannish-green speckled fish, nicely camouflaged to match the dappled sunlight on rocks and leaves. “That fish will need to survive another year before it’s large enough to migrate out to sea.” As the streamflow diminished to nothing in the sunny channel beyond the green riparian canopy, the water temperature rose steadily to meet the air. But conditions were looking good for fish under the canopy, and we left after a week, intending to return in June to repeat our measurements.

Delayed until August by a major wildfire, we returned to find a few trunks still smoldering and much of the landscape blackened. Fortunately, the same cool groundwater that sustains this unlikely fish population also saved our cable from certain demise. Only one break was found and easily fixed: The cable had once been looped up and over a log, now gone, and the cable had melted into two. DTS confirmed the presence of all of the groundwater inputs we had suspected in May as distinct, cool stripes, but their area was reduced, and in many places, not continuously connected. By the end of the summer, fish that explored these farthest pools were trapped, they were oxygen-depleted, and they perished. And yet upstream under the canopy many survived, against all odds, in an improbable handful of tiny cool pools in the middle of a dryland mountain, waiting for the big storms of winter to open their route to the sea.

Dr. Christine Hatch is Research Extension Liaison for the Center for Agriculture, Food and the Environment, and Extension Associate Professor of Water Resources and Climate Change in the Department of Geosciences at UMass Amherst.