A thing that went bump in the night 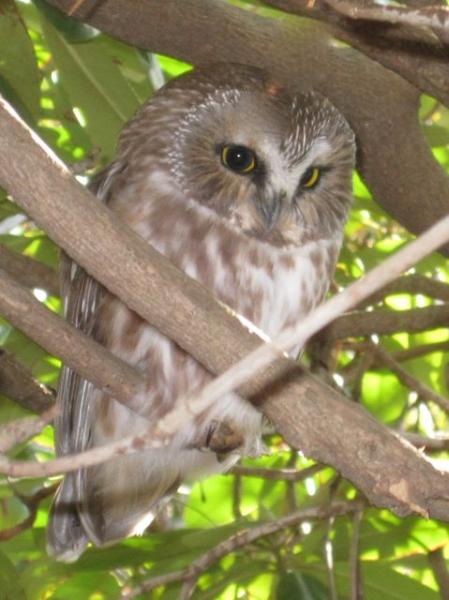 The northern saw-whet owl is only about 7 inches long and weighs between 2 and 5 ounces. PHOTO BY JOSHUA ROSE

A few years ago, as I sat grading papers near midnight, I heard a thump. The sound did not seem quite to match that of the house settling or of a flying squirrel landing on the outside wall. I didn’t know what to make of it. The next morning, as I sat in the same room and looked out the window, I saw a ghostly image on the glass, which gave me a clue.

The window pane showed a gray silhouette of a northern saw-whet owl. Owls (and some other birds) have been reported to have feathers called “powder-down” under the outer layer of feathers. Powder-down crumbles on touch, and the birds, as they preen, use the resulting powder to dust their feathers. The powder might help both to soak up blood splashed on a carnivorous animal and to kill the lice and mites that inhabit feathers. When owl feathers contact a surface they can leave behind a bit of this powder; a forceful impact—such as hitting my window—can leave behind a tracing of the owl, which might include miscellaneous dust and feather fragments as well as the powder. (Fortunately, there was no body on the ground nearby and no evidence of blood or feathers, so I’m confident that the owl survived.)

The northern saw-whet owl is, at about three to four ounces, the smallest owl in this region. This species breeds at higher elevations in western Massachusetts, and is quite common in the forests of the northern United States and southern Canada. At this time of year our local population is augmented by thousands of these owls migrating south from farther north. The saw-whet owl is named for its distinctive tooting call, which sounds like someone sharpening a saw with repeated rasps of a whetstone. The name “saw-whet” was originally applied in England to the great tit, a chickadee-like bird, and English immigrants applied the familiar name to a very different bird that also sounds like a saw being sharpened.

Northern saw-whet owls, like other owls, have proportionately large heads, soft plumage, and large, forward-facing eyes. These traits, along with small size, warm brown colors, and a tendency to sit still rather than to flee when a person is nearby, have led humans to describe these birds as “tame,” “charming” and “cute.” From a mouse’s perspective, though, there is nothing tame, charming or cute about these hunters. The mouse has to contend with a predator who has precise hearing aided by large ears buried in the soft feathers of the large head — hearing that can pinpoint the location a very faint sound, such as that made by a moving mouse. Those large eyes, so endearing to a human viewer, are effective at gathering the faint signal of movement illuminated by moon — and star — light on a nighttime forest floor. The soft feathers provide the owl with an almost silent flight with which to approach its prey. Least charming to a mouse are the needle-sharp talons at the end of the powerful feet, the business end of the owl.

Although an individual owl is death to many individual mice, the rise and fall of mouse populations affects the owls’ reproduction and survival and thus their changing abundance from year to year. Fluctuations in mouse population numbers are primarily driven by the availability of seeds. Thus, the annual changes in production of acorns, pine seeds and other wild plant crops influence the chances that an owl will leave its powdery image on my window.