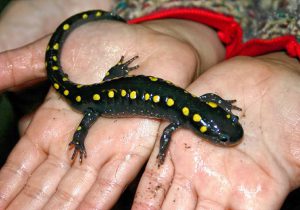 Spotted salamanders are iconic for many people. Shiny, black and yellow, 7- to 9-inch long amphibians, they live underground for 11 months of the year as top predators of the soil community.

Mating and laying eggs in vernal pools, they then return to the forest soils, sometimes crossing roads in the process. How can we help these animals when they cross roads to get to and from their breeding pools? How can we assist them into an uncertain future? This is where salamander migration tunnels fit in.

In 1987 several organizations came together to build Amherst’s Henry Street salamander tunnels — possibly the first amphibian road crossing structures in North America. The Hitchcock Center for the Environment in Amherst eventually took over maintaining the tunnels and shepherding the spotted salamanders across the road season after season.

Thirty years later, the salamanders and the tunnels are still there. The salamander lovers still come out to Henry Street on the first rainy nights in spring when temperatures remain 40 degrees or above. These things have remained relatively and wonderfully stable. But what about the behind-the-scene details of running a significant, long-term, biodiversity conservation project?

For starters, significant structural issues need addressing. The tunnel infrastructure is decaying. The dry wells that formerly drained excess water from the tunnel entrances have clogged and no longer function. The masonry walls at both ends of the tunnels are crumbling. The polymer-concrete airport runway drainage tiles, which provide the passage of the animals under Henry Street, are solid and in good repair but pavement around them is starting to crumble. Sediment from the winter roadways washes down Henry Street and is deposited in the tunnels. The drift fences, made of plastic mesh, that direct the migrating animals to the tunnel entrances have torn and collapsed many times.

Our team of volunteers has worked hard on each problem as it’s come up. This year we set about figuring out a way to drain water away from the tunnel entrances. This was our top priority: When street drainage water overtopped the concrete tunnel mini-abutments it prevented the animals from swimming through. They’re good swimmers but they don’t know how to negotiate a dark tunnel full of water with a concrete wall above the entrance.

To solve this problem, we excavated drainage swales that direct the roadway runoff away toward the seasonal stream and wetland. We’ll watch to see how well this solution works.

With cooperation from W.D. Cowls Land Company, land owner on the east side of Henry Street, we’ve worked painstakingly on the drift fences year after year, cobbling together something that functions reasonably well. However, there are just too many places where the animals can wiggle through or clamber over and still get out onto the roadway where they risk death by automobile tires. So this year we’re considering replacing the fences on the east side of the roadway.

The company that made the original roadway tiles now offers a deluxe roadway crossing system complete with under-roadway tiles and molded drift fence modules that can be connected along the fence line. They’ve designed an attractive, though expensive, solution to some of the problems we’ve encountered.

But what about the spotted salamander population? Have the tunnels helped the animals over these 30 years? It’s challenging, to say the least, to count the breeding animals in a spotted salamander population. They make their way when most self-respecting mammals are not out prowling — in rain, the harder the better, 40 degrees and dark. These are ideal conditions for salamanders, but not for human observers.

Two years ago we began a collaboration with Brandon Hedrick, a researcher from the University of Massachusetts, Amherst, who wanted to better determine how many salamanders go through the tunnels. This involves volunteers with waterproof paper and flashlights counting and recording the salamanders that approach the tunnels, and noting how many use the tunnel and how many balk at the entrance.

Other volunteers monitor the sections of the road on either side of the tunnels and count salamanders that are able to get over the drift fence to the road. Brandon is also interested in whether or not adjusting some of the variables involved will get more salamanders to use the tunnels.

Over the years, we have also collected data on the number of egg masses laid by the female salamanders. After the migration, but before the masses have hatched, we pull on our water shoes or waders and we systematically traverse the red maple swamp where the salamanders deposit their eggs. We count all the masses, comparing the numbers from year to year to gauge how the population is faring.

So far, we’ve drawn some cautious conclusions from our data. First, the breeding population varies tremendously from year to year. Second, using both the egg mass numbers and our observations of adults, we estimate that the population is over 300 animals and that it has remained relatively steady over the years. And I’m excited to report that this year we observed more than 350 salamanders at the site.

This looks like a success story, especially considering infrastructure challenges, neighborhood land use changes and broad climatic trends. Preserving local biodiversity is labor-intensive and requires significant resources. The future is uncertain and the salamanders need our help.

Many thanks to the community for support over all these years. Come out and see us on the rainy nights of early spring.

Ted Watt is an educator/naturalist at the Hitchcock Center for the Environment. To volunteer at the salamander tunnels or for more information, call the Center at (413) 256-6006.