An Earth Day roadside walk reveals our trashy side

I’ve been living in Leverett for nine years. There’s lots to like here: a beautiful pond, an excellent elementary school, a fine old Town Hall, and miles of country road with light traffic — great for biking. I love to tell people about the T-shirt that the Friends of Leverett Library used to sell with all the road names of Leverett beautifully written on the front. That’s how small Leverett is.

We also have a townwide listserv with more than 600 subscribers. Folks post notices about stuff they’re giving away (including advice), stuff they need, information about events, and helping each other.

In the early days of the pandemic, people used the list to organize mask sewing; the masks were available free on a rack outside our small post office. A month or so later, we came together through the list to organize food and drink supporting firefighters at the Joshua Hill fire, which burned more than 55 acres not far from the town center.

So it was natural that, as Earth Day approached, a group called Leverett Community Builders put out a message asking people to collect litter on roadsides around town. Within a week, more than 50 groups or individuals signed up with their chosen road or section of a road. The town’s transfer station announced it would waive fees for disposal of trash picked up that day. Last Saturday, the Great Leverett Roadside Cleanup launched.

If a road can have a dark underbelly, this was it. Our group of six adults and four children, ages 5 through 13, walked a mere two-thirds of a mile in close to two hours, picking up trash of all sorts. We found hubcaps, a CV boot, food containers, candy wrappers and snack bags, cans and bottles, and more. We filled the back of a pickup almost to overflowing with bags full of trash and barrels full of recyclables, plus larger items that wouldn’t fit in either bags or barrels. 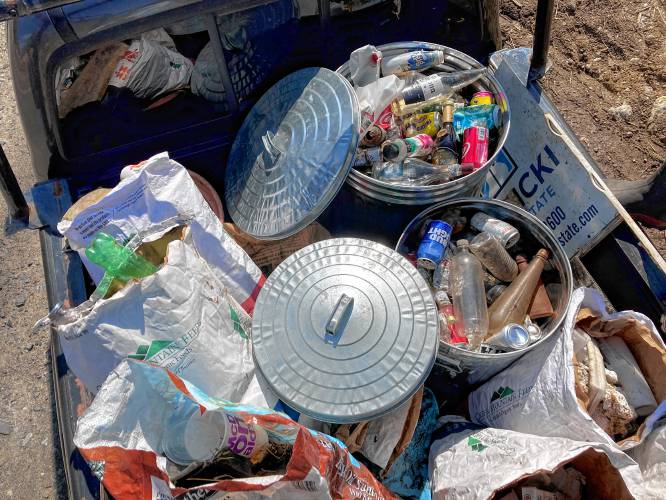 Some of the roadside trash collected by the writer and his neighbors on Earth Day. Contributed/Jess Rocheleau

The bottles bear special mention. They redefine the old term “deposit bottles.” These were bottles “deposited” from moving cars onto whatever real estate that happened to be nearby.

There were, of course, the inevitable water bottles, in various shapes and conditions. Wine bottles constituted the majority of glass containers. But the winners in the ubiquity contest were what we used to call liquor miniatures or airplane shots, but now go by the far cuter name of “nips.”

These little treasures usually hold 50 ml. (1.7 oz.) of alcoholic drink. And the winning brand among these nips was Fireball, a 66-proof concoction of Canadian rye and cinnamon. They were everywhere. Either this is the favorite drink of the drink-and-drive crowd, or one person who likes it drives our road a lot.

In that two-thirds of a mile, we picked up a few dozen Fireball nips. We learned later, as people shared their experiences on the listserv, that nips showed up in large numbers on other roads as well. Just today, someone posted an article about a road cleanup in Plymouth, where the crews picked up 500 nips bottles on a 3-mile section of road in cleanups six months apart.

Add the wine bottles and the beer cans to the nips, and it’s easy to see that drinking and driving are a common feature of our bucolic roads. And tossing the empties out the window is often the disposal method of choice. It points to a much bigger problem than littering.

But nips also serve as a useful metaphor for the global fix we’re in.

For one, alcohol is addictive, and so is our dependence on cars, on plastic and on the “freedom” to pollute. For another, nips are so conveniently small that it’s easy to think one small bottle on the roadside doesn’t amount to much — until you multiply it by the number of people doing it and the number of times they do it.

In a parallel fashion, one short trip in the car adds a minuscule amount of carbon dioxide to the air compared to the gigatons of CO2 added globally every year — until you calculate the number of those short trips, and longer ones, that happen every minute.

Eliminating carelessly discarded nips bottles may be about as hard as getting rid of fossil fuels. There’s an industry that likes selling nips and will resist requiring deposits on the little bottles. There’s a bevy of consumers that like buying nips and will ignore or protest the extra cost of deposits.

Habits are hard to break, especially when we can’t acknowledge that they are habits. Oil or nips, we can do better.

Michael Dover is a retired environmental scientist and former board member of the Hitchcock Center for the Environment.