By John Sinton for the Gazette 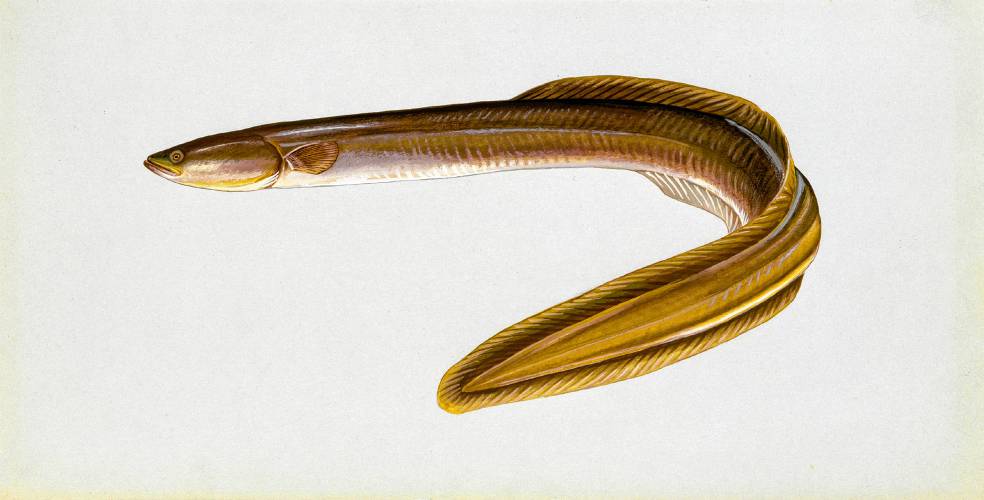 Editor’s note: This is the second of a two-part essay about American eels; the first was published on Saturday, March 19. Nehoumo is the Abenaki name for this eel.

Eels such as Nehoumo, our Connecticut River eel, live in all the countries that border the North Atlantic Ocean, from Russia and the Mediterranean to northern Quebec and the Gulf of Mexico. However, they play markedly different roles in American and in European history.

Here is a Mi’kmaq story of Eel, Lobster and Kluskap, a benevolent figure in Algonkian lands:

In the days of Kluskap, the river water was clear and fresh until a monster Eel swam down the river and pushed all the fishes and all the fresh water into the salty bay. Turtle told Kluskap of the cruel hardships that resulted. Kluskap gave great powers to Lobster, who grew much in size and strength and fought the evil Eel. The long battle stirred up much mud and many waves far up the river until the Eel was killed. And even today in Kluskap’s bay and on the muddy river, with an elbow bend, the battle scene takes place twice a day.

Eels are ubiquitous in the lifeways of the Algonkian and Haudenosaunee natives of Northeastern America and Eastern Canada. They appear in stories and comprise one of the nine Haudenosaunee (Iroquois) clans. Eel forms a significant part of Northeast tribal diets, both fresh and smoked. Smoked eel accompanied Natives on long journeys and helped prevent starvation during winter. They were trade items and were featured at the table of the first Wampanoag/English Thanksgiving in 1621. 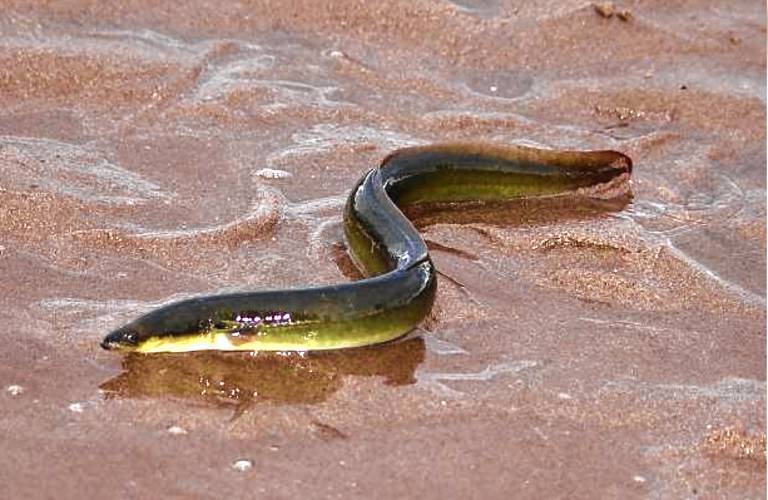 American eel, at the fourth, yellow stage, in which specialized gills allow the eel to breathe atmospheric oxygen for many hours. Parks Canada

Indians caught eel throughout the year, using different spears and techniques. The fall migration of silver eels provided the best opportunities for families to get together and collect thousands of fat eels in stone weirs, some of which can still be seen after centuries of use.

Tribal names for eel varied significantly: The Abenaki’s nehoumo was the Anishinabe’s pimisi, and the Mohawk’s Kiawerón:ko, the Mik’maq’s ga’t in Maine and the kataq on Cape Breton Island. In the Mik’maq world, eel skin was ga’tomi, which served as boot soles, ties, bindings, crafts, as stabilizers for broken bones and as medicine. The tail was bait for fishing. Eel oil was added to baby bottles for nutrition and to introduce the taste of eel to babies.

However, not all Indigenous tribes held eel in high esteem. I asked my friend John Currahee about eel in Southeastern lifeways, and he shot back a bit of Ogden Nash doggerel: “I don’t mind eels/except as meals/and the way they feels.”

John is a Southeastern Native American, steeped in the Cherokee language, and wrote that he had “never heard of eating eels among the Saponi or Cherokee people… I know of no significant use of them by the Catawba and Lumbee people. I am sure some of them may have occasionally eaten the critters, but most would not make any effort to do so. Mountain people would not choose to eat them even if available, except to avoid starvation.” So much for assumptions about the uniformity of Native Americans’ relationships to our fellow creatures!

In Europe, on the other hand, eel has played the role of most mysterious of fish. Twenty-five hundred years ago, Aristotle, finding no sex organs in eels, became convinced that they came spontaneously from mud, while Pliny the Elder found that eels were made from the sloughed skin that old eels rubbed off on rocks.

More than two millennia later, in 1876, undergraduate biology major Sigmund Freud spent a fruitless summer in Trieste dissecting eels, searching for sex organs (irony noted). It took until 1896 to find a male eel off the Sicilian coast, and it was only in the 1920s that a persistent Dane, Johannes Schmidt, discovered that mature, silver-stage eels spawn somewhere in the Sargasso Sea.

Marine scientists have spent many decades tracking down eels and investigating their life histories. This much we know: All eels, whether from the New or Old World, spawn in the Sargasso Sea, south of Bermuda. No one has yet seen eels in the act of spawning.

The European and American species can interbreed, and those with mixed parentage wind up in Iceland. Eels from the colder waters of Canada are predominantly female, while sex ratios from watersheds in the United States are highly variable. Eels still retain enough secrets to ensure humility among scientific investigators.

Marine scientists have spent many decades tracking down eels and investigating their life histories. This much we know: All eels, whether from the New or Old World, spawn in the Sargasso Sea, south of Bermuda. No one has yet seen eels in the act of spawning.

The European and American species can interbreed, and those with mixed parentage wind up in Iceland. Eels from the colder waters of Canada are predominantly female, while sex ratios from watersheds in the United States are highly variable. Eels still retain enough secrets to ensure humility among scientific investigators. 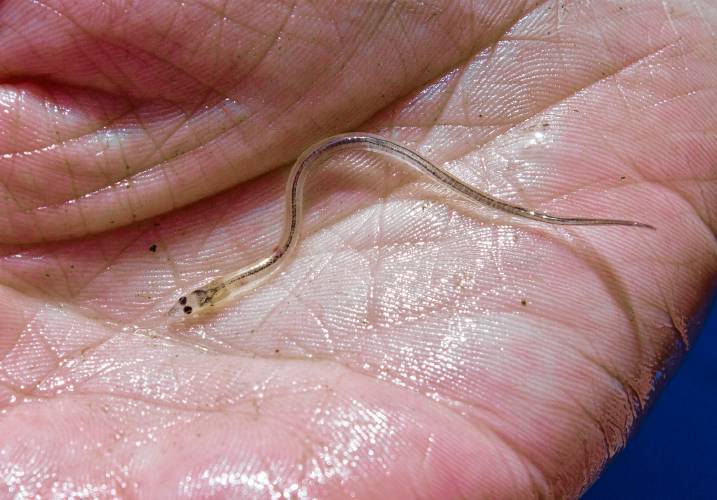 Sadly, the eel’s future is problematic: Some regions in both Europe and Northeast America have lost more than 90% of their eel population since 1980. First and foremost, hydroelectric dams are a major culprit because silver eels get chopped up in the spinning wheels of hydro turbines on fall migration.

Second, until recently, fishery regulations allowed the capture of millions of tons of glass eels for export to Europe and the Far East. The practice has now been banned in parts of North America.

Finally, climate change is transforming habitat and shifting ocean currents away from coastal America, where all American eel larvae land.

Once America’s most common fish, eel numbers are greatly reduced, and their future is questionable. So, what difference does it make?

Allow me to remind you of Rachel Carson’s description of us: “Each of us carries in our veins a salty stream in which the elements sodium, potassium, and calcium are combined in almost the same proportions as in sea water. This is our inheritance.”

In the end, we are all sea creatures, and that fellowship offers us a chance for grace. 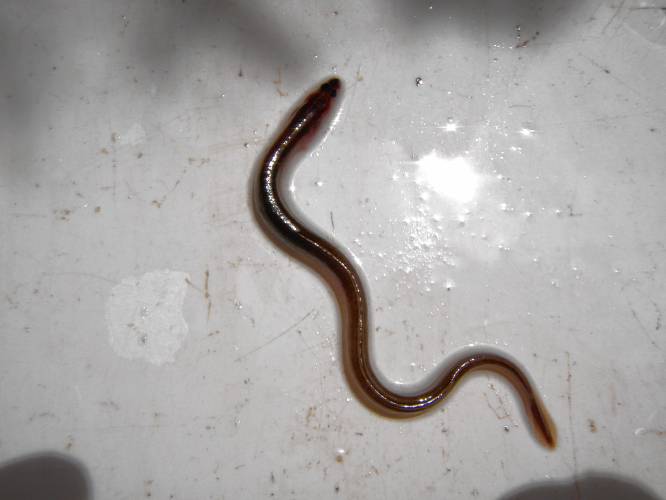 One response to “An eel’s journey: Part 2: A troubled present day”