An inside look at a loon

During my stint as a bird rehabilitation intern in Vermont years ago, we had some memorable moments.

Once, someone brought in a juvenile bald eagle that had been shot near the Canadian border. We were horrified at the crime of shooting such a bird, but excited to be in charge of its care. It made a full recovery and we released it at the Connecticut River, where it promptly flew across into New Hampshire.

But the experience that made perhaps the biggest impression on me was the time we got a call about a common loon that had been found in a parking lot, listless and unable to fly.

It was a classic case of “grounding” and was familiar to my more experienced coworkers: Loons become grounded when they land far from water. When a loon is flying, a wet parking lot can look a lot like a lake from above. When the loon attempts to land, its body meets pavement where it was expecting water. Not only is injury likely, but it is all but impossible for the loon to take off again.

Loons’ legs are located far at the back of their bodies, making walking on land awkward and difficult — they are built to take off from water only. A grounded loon is stranded.

The loon was brought to our facility in the evening. Loons are much bigger than you think! And their beaks are like daggers. Even though this animal was confused and sick, it was aggressive, and we all had to wear safety goggles to protect our eyes in case it lashed out. A pair of loons on a New Hampshire lake. SCOTT HERON/VIA FLICKR

An intake exam showed no broken bones or other apparent injuries. But when we palpated the keel — a vertical, bony ridge between the ribs — it was razor sharp, a clear sign of emaciation. On a well-fed bird, the flight muscles in the breast are plump and the keel can be felt, but barely. On a starving bird, the muscles are atrophied and the keel feels sharp, poking out and easily felt.

After the initial exam we administered fluids, made the bird comfortable and put it in a dark enclosure for the night, a typical course of treatment for a bird in this condition. We wouldn’t feed it solids until we could observe it more. Unfortunately, we discovered in the morning that the loon had died in the night.

We were saddened that it had been too late for us to help it, and also curious: Could it have starved to death? Or was there something else going on?

My boss must have had a hunch that there was more going on than met the eye. She decided to do a necropsy, which is the animal version of an autopsy, to see if we could get any closer to determining the cause of death. Upon opening up the bird’s body, we got an internal look at its painfully thin breast muscle. Even if this loon could have flown out of the parking lot, these weak flight muscles would have been strained to the max.

As we dug deeper, I was struck by the plastic accordion tube-looking trachea, or windpipe, branching into the two lungs. Next we examined the loons’ two stomachs: the gizzard and the proventriculus, a smooth, soft organ in charge of digesting food.

Stomach contents could potentially provide clues to the cause of death. Even though I’d only been interning for a few months, I’d already seen lead poisoning in a Canada goose that had swallowed a lead sinker. (It honked uncontrollably for days, but luckily responded to treatment and was able to be released.) 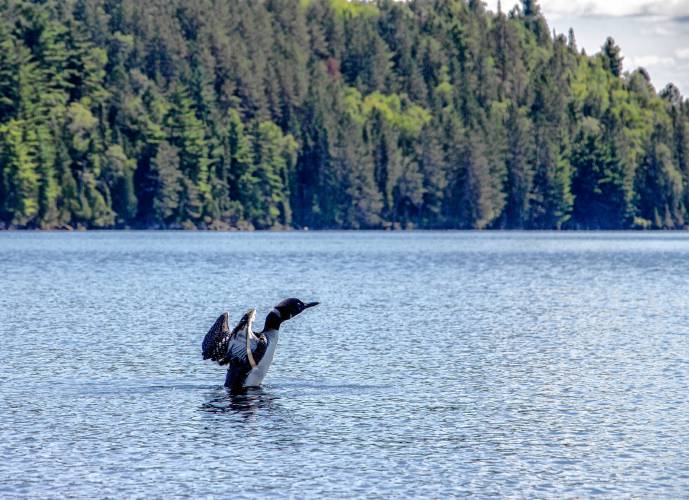 Could this loon have also suffered from lead poisoning? First we studied the gizzard, a tough, muscular pocket that reminded me of the texture and thickness of a human tongue. We opened it up to see what was inside: nothing but smooth stones. The stones were to be expected. Most waterfowl swallow stones, which stay in the gizzard in order to help grind up its food before passing into the proventriculus.

Neither organ contained any trace of food. This loon’s stomach was completely empty; it hadn’t had anything to eat in a long time. But why?

We searched the rest of the abdomen. I don’t remember now whether we discovered male or female reproductive parts, or what the liver and kidneys and other organs looked like. But there was indeed something that shouldn’t have been there: small, pea-size balls of yellowish-white, speckling the walls of the abdominal cavity.

The head rehabilitator suspected aspergillosis, a fungal infection that can plague many animals, including people and birds. We’d never know for sure, but we surmised that the fungal infection was the underlying cause that led to the bird’s inability to feed itself and its grounding in the parking lot.

Even under the sad circumstance of losing this loon, I’ll never forget the amazement I experienced with getting an inside look at one of my favorite birds.

Katie Koerten is an environmental educator at the Hitchcock Center for the Environment. If you find an injured bird or other animal, go to mass.gov/wildlife-rehabilitation for a list of local rehabilitators that can help.

Earth Matters has been a project of the Hitchcock Center for the Environment for 11 years, produced by volunteers and friends of the center. The COVID-19 crisis has caused the center to cancel almost all programming, leading to a huge budget shortfall. To help Hitchcock through this very challenging time, please visit hitchcockcenter.org and click donate.