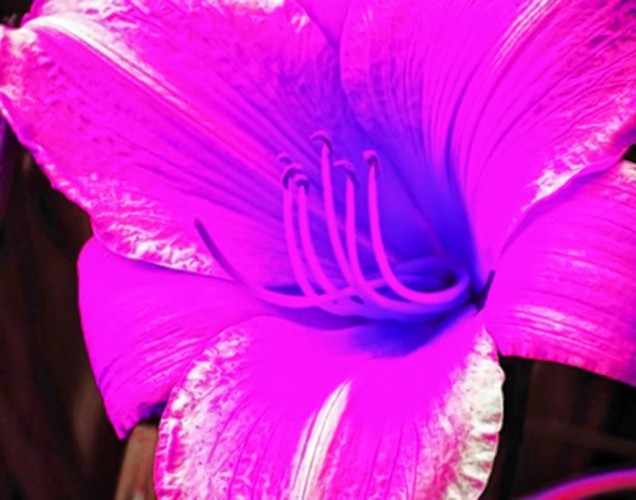 Bees can see ultraviolet light, which humans can’t. This photo simulates how a day lily might look to a bee. Rebecca Reid

Most humans experience a colorful world thanks to cells sensitive to three different color ranges, along with cells sensitive to the simple presence of light. We see more color than do many other animals; dogs and cats, for example, have many fewer color-sensitive cells in their eyes and see what we would think of as a washed-out, faintly pastel view (like a lightly tinted, black and white photograph).

Other animals, with different sets of color-sensitive cells, see a more colorful world than we do. Many birds and insects that are able to see ultraviolet light, which is invisible to humans, have a color palette very different from ours.

Ultraviolet vision allows a nectar-eating bird or insect to see striking petal patterns that we can’t. The two sexes of many birds, like the northern mockingbird, look very much alike to humans, but can probably be told apart at a glance by a bird detecting differences in ultraviolet reflectance of the two sexes.

Infrared light, also invisible to humans, is detected by many snakes — a useful ability if one is hunting animals that are warmer than their environment and thus stand out as brighter in the infrared.

Birds and insects are also much more sensitive to the polarization of light than we are (although we easily detect this phenomenon by rotating polarized sunglasses in front of our eye). Thus, they get rich information about the position of the sun in the sky (which polarizes sunlight in a reliable pattern) even if the sun itself is not visible.

Just as we designate light too low in frequency for us to see as “infrared” and too high in frequency for our eyes as “ultraviolet,” we call sound beyond the range of human detection “infrasound” and “ultrasound.” These inaudible-to-human sounds are used by various other animals.

Elephants use very deep infrasound to communicate over distances of miles, and bats and toothed whales listen for the very high-pitched echoes of their own ultrasound to navigate and to catch prey in conditions that appear dark to our eyes.

Senses in the skin go well beyond simple “touch.” In the water I may be vaguely aware of strong currents moving against me, and if someone were to drop a live electric wire into the water near me, I would probably feel a sensation — if I survived this dangerous and absolutely NOT recommended experiment.

Many fish, though, have organs that make them much more acutely attuned to the motions and electric currents in the water around them. The “lateral line organ” of a fish enables it to detect very slight movement of water, useful information both for knowing how and where the fish itself is swimming, and for detecting the movements of nearby potential predators or prey. Although the lateral line organ is located in the skin on the side of a fish, it is structurally and developmentally more similar to our inner ear than to our skin senses.

Organs sensitive to electricity provide information about muscle movement of other animals, even those hidden in dark water or mud. An electric sense is not very useful in the air, which is an excellent electrical insulator, and this sense is lost in those of us who spend most of our time out of the water. Most aquatic animals with terrestrial ancestors (e.g., whales, seals, penguins, alligators) are stuck with this loss of a useful sense.

One mammal that has returned to the water, the platypus of Australia, has re-evolved an electric sense, useful for hunting in muddy water.

Animals also use magnetic information to navigate and place themselves in the world. I can use a manufactured magnetic compass and a printed map to find my way. For many millions of years, though, various other animals have detected and mapped magnetic fields to their advantage. Birds detect the earth’s magnetic field and, when integrated with information from other senses, this signal contributes to a mental map of the globe that they use in navigating long distances.

W. S. Gilbert’s statement that “things are seldom what they seem,” which originally referred to human relationships, applies well to the way different species experience the world. The confusingly dark depths of the ocean may not seem so to a fish or a whale. The plainest white flower may be dramatically marked for a bee. Trackless wastes may have maps legible to a bird flying over them.

The list could continue with more sensory organs that we lack, detection abilities (including a variety of chemical senses) to which we are “blind,” and impressive capabilities to bring information together into complex pictures of the world.

If seeing is believing, different species have different “beliefs” about the nature of the perceived world.