Are beavers to blame for flooding damage?

By Christine  Hatch For the Gazette

We have lots of roads in Massachusetts, and lots of rivers. Everywhere they cross is an interaction between the natural world, with all of its unpredictability, and our transportation networks. These interactions aren’t always easy. A recent damaging flood in Belchertown is a case in point. Some folks quickly blamed beavers, but their dams weren’t the problem. The problem is how we design our roads and manage the water that they cross.

This July, Massachusetts sped past normal precipitation levels for the month, breaking records around the state for single-day precipitation amounts. Two-day storm totals included 3.94 inches in Springfield, 3.52 in Chicopee and 3.43 in Belchertown, yielding a monthly total 300% above average. 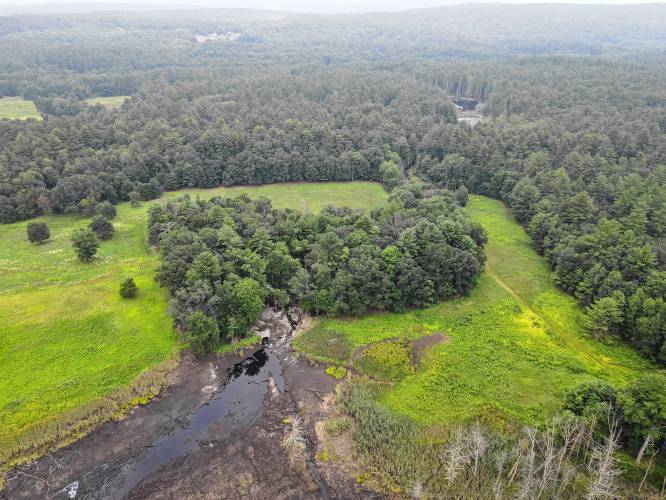 This is becoming the norm for our region and it comes at a cost. Not only can heavy rains bring down trees and damage crops; most of our transportation network wasn’t designed to handle high flows produced by these intense events. Typically, it’s the tiny tributaries, loaded with sediment, downed logs and vegetation, that catch us off guard.

When a culvert blew out a section of East Street in Belchertown on July 18, I set out to investigate. As we walked up the closed road, we saw bits of blacktop and large branches strewn across several lawns. Large melon-sized cobbles had been transported hundreds of yards (a feat which requires very fast flowing water!) into gardens and driveways.

Sharply cut road banks testified to strong whirlpool eddies both upstream and downstream. The roadbed was cut clean through 10 feet of material down to the stream. What happened here, and why?

Rumors pointed to beavers in the Herman Covey Wildlife Management Area just upstream, but I wasn’t convinced. WMAs are set up to allow nature to do its thing, and the increasing beaver populations in the state are no exception. Beavers have happily resided on these lands for decades, creating thriving wetlands that are home to a diverse community of plants and animals.

In addition, their oxygen-poor ponds accumulate organic matter, storing carbon in the rich fertile depths. These wetlands clean and filter water, and can capture, slow and spread large stormflows across their wide meadows, preventing flood damage downstream — until now. 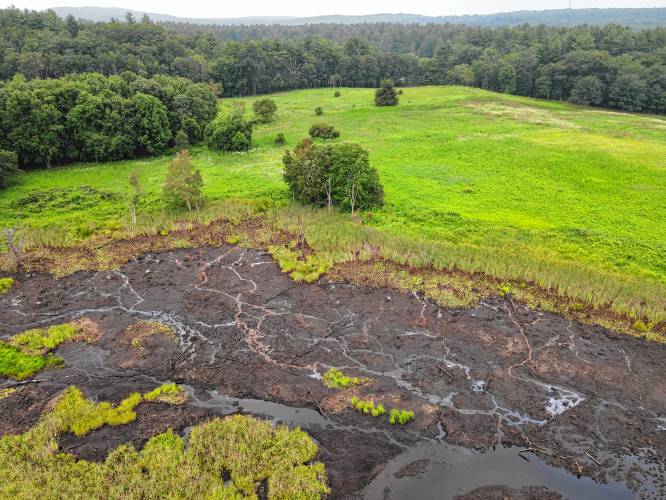 Historical maps of the wildlife management area show wetlands from as far back as the 1900s, and photos indicate the presence of beavers in the area before the 1990s, with ponds alternating between sometimes dry and sometimes wet.

Over the years, there seemed to be a string of two or three large ponds that would come and go. Beavers may relocate, be removed, or their dams may fail, causing their abandoned ponds to drain and fill with grassy meadow vegetation. Over time, these meadows may be succeeded by woodlands, which may be felled once again by future beavers. It’s all part of the cycle.

Enter climate change, with rainstorms delivering precipitation with a high-intensity punch. Generally, beavers maintain their dams (homes!) to weather storms, but this time, at this location, rainfall intensity (not seen since the 1938 hurricane) was just too much. 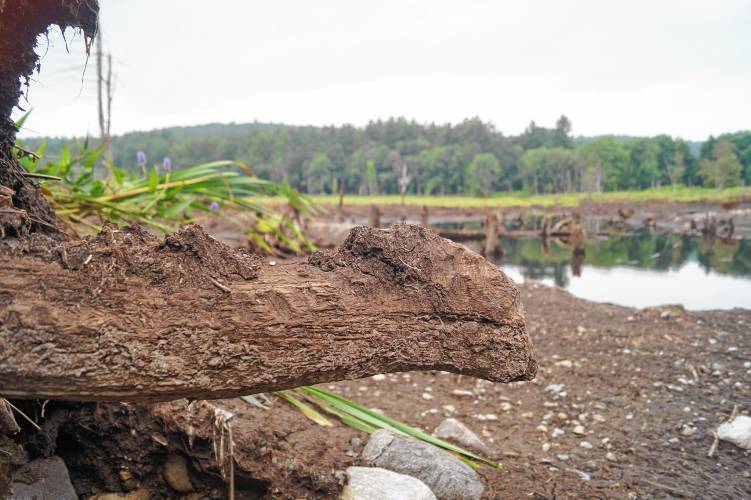 Beavers had built an upper and a lower dam in the Covey management area. The upper dam, which was holding a 17-acre pond, burst and sent a powerful flood wave downstream. This cut a deep gash through the streambed and into the glacial till below. This powerful wave carried everything — water, sediment, large chunks of compacted organic soil, vegetation, trees, culvert pipes — dropping the mass along the way and out onto the flatter, wider floodplain below.

So beavers caused the flood, right?

Well, no. One of the important roles beaver dams play in the landscape is actually capturing and dissipating the flood wave during a storm, which is exactly what the second beaver dam downstream helped to do. Initially, the dam-burst flood had a lot of energy to erode and transport large material. Fortunately, the floodplain meadow between the upper and lower beaver ponds dissipated the energy. Large cobbles graded into smaller and smaller materials and finally into fine sands that abruptly stopped.

Then, all of the water entered the meadowy upstream part of the lower beaver pond. The second wetland caught the flood.

Despite the fact that twice as much water was added to the lower wetland (rain plus floodwaters), the lower beaver dam, some 20 feet upstream of the road, did not fail. At this point, storm water probably rose and spilled over the lower beaver dam, pushing some loose branches and debris over the top. Under the road, the paltry 3-foot culvert opening was no match for this volume of material. The culvert clogged, and the road became a dam. Water levels rose behind the clogged culvert, and appeared to have topped out a foot or two above the road. 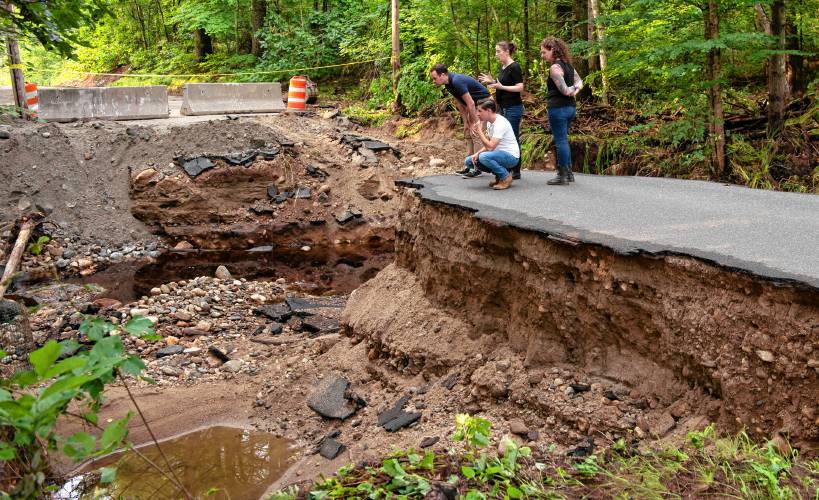 Rep. Jacob R. Olivera, kneeling, Sen. Eric P. Lesser, Conservation Commission Administrator Erica Larner, and Jen Turner, the chair of the select board in Belchertown, look over the damage on July 21 caused by the flooding on East Street in Belchertown on July 18. STAFF PHOTO/CAROL LOLLIS

Then disaster struck. With the pressure and whirling erosional force of two whole watersheds’ worth of record-breaking storm, roadbed materials were undercut and washed out. A sudden burst of water, logs, debris, asphalt and plant materials flushed through the opening, causing severe damage and flooding to downstream homes.

The burst cut a gaping slice through the road down to the streambed, taking one driveway and its culvert along with it. A 10-foot wall of logs, vegetation and debris that were piled upstream of the road, just downstream of the intact lower beaver dam, saved downstream homes from an even worse fate. We’ve guaranteed nature (and beavers) a place in our landscape; and we, and they, will need to adapt to climate change together.

Five days after the flood, downstream beavers were busy shoring up their structure, rebuilding farther back from the road in a broad arc, designed to withstand a large wave. Perhaps we can learn something from nature’s engineers. We could start by replacing the 3-foot-wide culvert with a larger, wider structure that would be more resilient to floods and passing logs and debris — for a stream this size the recommended width is more like 12 or 14 feet. If federal infrastructure money comes our way, my first recommendation will be that all culvert crossings in the state be replaced to meet a similar standard that would protect us from damaging, intense storms wrought by climate change.

Learn more with these additional resources and photos.

Christine Hatch is research-extension Liaison for the Center for Agriculture, Food and the Environment, and extension associate professor of Water Resources and Climate Change in the Geosciences Department at University of Massachusetts Amherst. She is a leader of the RiverSmart Communities project, supporting ecologically restorative flood prevention and remediation in New England. This project is a serendipitous intersection between her work on freshwater wetlands, rivers and flood resilience.

One response to “Are beavers to blame for flooding damage?”