August brings abundant evidence of parasites all around 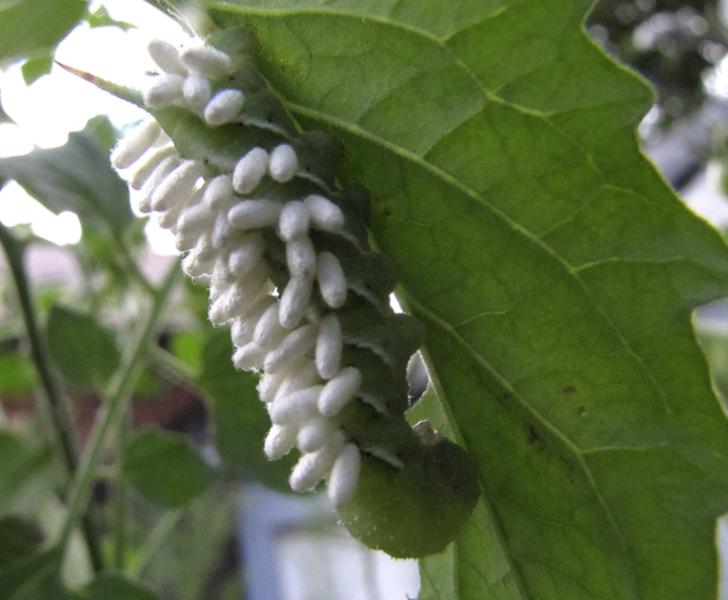 On an August afternoon at home, my wife removed several impressively large caterpillars from our tomato plants. These animals were tobacco hornworms, common feeders on tomato (and tobacco) foliage.

Hornworms are parasites, organisms that benefit at the expense of another. In this case the hornworms are doubly parasitic: They take advantage both of the nutrients that tomato plants store in their leaves and of the effort that humans put into gardening and farming. Both the tomato plants and humans give up food to these larval Carolina sphinx moths. Although farmers and gardeners might resent the loss of their labor to parasites, naturalists (who might also be farmers or gardeners) find parasitism as fascinating as other kinds of interactions among species.

Parasitism is ubiquitous in nature; by some estimates more than half of all organisms are parasites. Parasites led to the evolution of many defenses, from the simple swatting at mosquitoes to the extraordinary molecular complexity of the immune system. Those individuals with better defense are likely to survive better and to leave more offspring.

The pervasiveness of parasitism has led many biologists to emphasize its role in organizing ecological communities and influencing aspects of life beyond the more obvious defenses such as immune systems and thick skins. The late evolutionary biologist William Hamilton of the University of Michigan and his former student Marlene Zuk suggested that the spectacular colors, structures and behaviors of many animals serve largely to advertise health and thus suitability as mates. An animal that can afford to produce elaborate displays, bright colors or fancy feathers is an animal that is probably not suffering from a serious parasitic infection and thus might have advantageous genes for resistance to pass along to offspring. This hypothesis has been the subject of a lot of research over the past quarter century, and some supportive evidence has accumulated.

The surfaces of the hornworms my wife found were covered with a few dozen whitish objects, standing upright, about the size and shape of very small grains of rice. Many of these rice-like objects had neat circular incisions at their tops, with the ends folded back to reveal empty silken chambers. These caterpillars and their surfaces showed another face of parasitism: The “rice grains” were pupal cases of a tiny wasp in the family Braconidae that lays its eggs in hornworms. (All members of this family parasitize other insects.) Wasp larvae consume the caterpillars from the inside and produce pupal chambers in which they metamorphose into adult wasps along their hosts’ back and sides. The openings I saw were where adult wasps had emerged. Such infected caterpillars do not survive to become moths. Some of the wasps themselves probably experienced infections of viruses, fungi, bacteria, nematode worms or mites — all types of organisms that commonly parasitize other organisms.

In the late summer woods around my house I see abundant additional evidence of parasitism. Biting flies and ticks in search of drops of blood attempt to parasitize me.

Many leaves on trees and smaller plants show holes and ragged edges where insect larvae have eaten and taken some nutrients from the plants. Patches of brown, gray or yellow on green leaves show where fungi, bacteria and viruses have lived at the plant’s expense. Some plants have dense clusters of hundreds of aphids sucking nutrients from their stems and leaves.

A walk in our local woods reveals another parasitic species: graceful Indian pipe flowers that adorn the forest floor. The white color of the plant indicates its inability to use sunlight directly. Instead it taps into, i.e., parasitizes, the underground network of fungal fibers associated with tree roots. Like the hornworm that takes advantage of the cooperation between tomato plants and gardeners, the Indian pipe takes advantage of the mutually beneficial relationships between most land plants and underground fungi. Amherst poet Emily Dickinson used the Indian pipe as an emblem of whiteness; I suspect that she was unaware of its parasitic lifestyle, often the target of literary disapproval, and I wonder what she might have written about the biological significance of the plant’s whiteness.

While parasitism produces disease, reduces crop yield, and causes what we might perceive as unpleasant and disfiguring blotches, it is a core part of the organization of ecological communities and our evolutionary heritage, perhaps even producing byproducts that we see as beautiful: The caterpillars that parasitize plant leaves grow up to be butterflies and moths, the colors of which may serve to advertise their relative freedom from parasites of their own.