Bats back from the brink — for now

Humanity’s attitude toward bats has vastly improved. For most of our history, various cultures associated bats with evil, mischief, witchcraft, disease, death or (of course) vampires. More recently, our attention has shifted toward bats’ beneficial aspects. We also have become aware of factors endangering some bat species, and and have become motivated to conserve their populations.

Few things boost our awareness of organisms more than their near extinction. For bats, it was white-nose syndrome.

This fungal infection first appeared in the U.S. in 2006. Almost immediately, bat populations started crashing, especially the once-abundant little brown bat. The state’s largest bat colony, in an abandoned mine in Chester, harbored an estimated 10,000 little browns toward the end of 2007. By early 2009, only 14 survived.

The tricolored bat now is listed as endangered in Massachusetts, while the northern long-eared bat is threatened nationally. In the wake of this catastrophe, humans’ concern for bats might finally outweigh our fear of them. 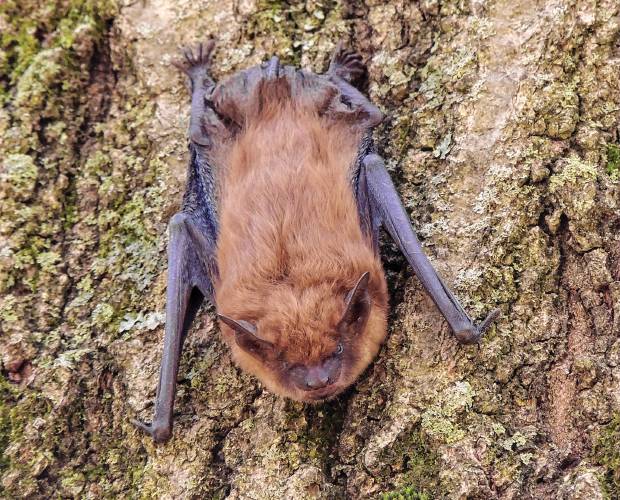 A big brown bat at rest on a tree trunk in New Jersey. It has an impressive wingspan of 12-14 inches. Anita Gould/via Flickr Testing

We benefit immensely from bats. They consume massive quantities of insects: Boston University professor Thomas Kunz has estimated that, just within the Route 128 loop around Boston, a single species — the big brown bat — eats over 14 tons of insects each year.

While we most often cheer about bats eating mosquitoes, their consumption of moths, beetles and other agricultural pests prevents over $3.7 billion of annual crop damage in the U.S.

Meanwhile, our fear of bats is based mostly on exaggeration. For example, while bats do carry rabies, since 1950 New England has had only two cases of humans contracting rabies from a bat, and in that time the entire country has had fewer than 80, nearly all involving people who attempted to handle bats bare-handedly. Of the 45 species of bats in the U.S., only five have ever transmitted rabies to a human.

Fortunately, the worst of the white nose syndrome plague may have passed.

Eight species of bat reside in Massachusetts; some are year-round residents that hibernate through the winter, while others migrate south and hibernate for shorter time spans, if at all. This diversity has allowed populations of some species to remain steady or even increase while others crashed.

White nose syndrome fatalities are overwhelmingly hibernating bats who exhaust their fat reserves fighting the infection, and run out of those reserves before enough night-flying insects are available in the spring. These bats also gather in large colonies, accelerating transmission of infections.

The shorter dormancy of migratory bats helps them survive white nose syndrome, and their smaller roosts spread germs more slowly. Meanwhile, the tiny remnant little brown bat populations appear to be evolving resistance to the fungus. Fungi like the species that causes the syndrome grow best in damp conditions, so bats that roost in dry locations have higher survival rates.

As development takes over increasing areas of Massachusetts, though, bats have fewer roost sites among which to choose. When humans, pets or other animals intrude into caves, individual bats often die, and sometimes entire colonies abandon roost sites.

When humans settled and deforested much of the state, little brown bats adopted barns as preferred breeding sites, but as agriculture becomes less prevalent in the state, barns are becoming less common. Humans remove dead and dying trees, viewing them as risks to safety and property and to the health of other trees; this destroys hollow trunks, cavities and loose sheets of bark that many bat species use for shelter.

And we have gotten more careful about sealing up our homes, preventing bats from forming colonies in our attics or garages.

As our regard for bats has increased, many have started offering bat houses to replace the lost barns and dead trees, but we need to place bat houses in the right locations. Since bats are nocturnal, many expect them to like houses in shady spots, but the reverse is true. Bats’ bodies lose heat rapidly due to their small size and membranous wings, expending fat reserves to maintain their body temperature.

In a warmer house they burn less energy keeping warm, so they prefer houses that receive between six and 10 hours of direct sunlight per day, depending on the ambient air temperature. Safety from predators is also crucial, so bat houses should be mounted on poles with baffles or the sides of buildings, a safe distance from tree branches and the ground.

Some bats instead choose human houses. This almost never works out, if only because the vast quantity of insects that bats eat translates into vast quantities of guano directly below their roost sites.

Big brown bats are the species that most often inhabits our homes, while little brown bats more often colonize barns and other uninsulated structures, because they prefer cooler temperatures. This may explain why the big brown bat is the predominant species around densely populated areas such as Boston and Providence.

MassWildlife, the Massachusetts Audubon Society, Bat Conservation International and other agencies have extensive online information about building and maintaining bat houses, relocating bat colonies from our homes, and more. Whether you’d like to see more bats around your home, or some are too close and you’d like them a bit further away, these should help you get started. To learn more, check out this list of resources.

Joshua Rose is a naturalist who lives in Amherst. He is a Hitchcock Center member, a board member of the Hampshire Bird Club and a contributing editor of the website bugguide.net, and he regularly leads programs for local nature-oriented groups.