Burrowing bulbs – plants that ‘plant’ themselves 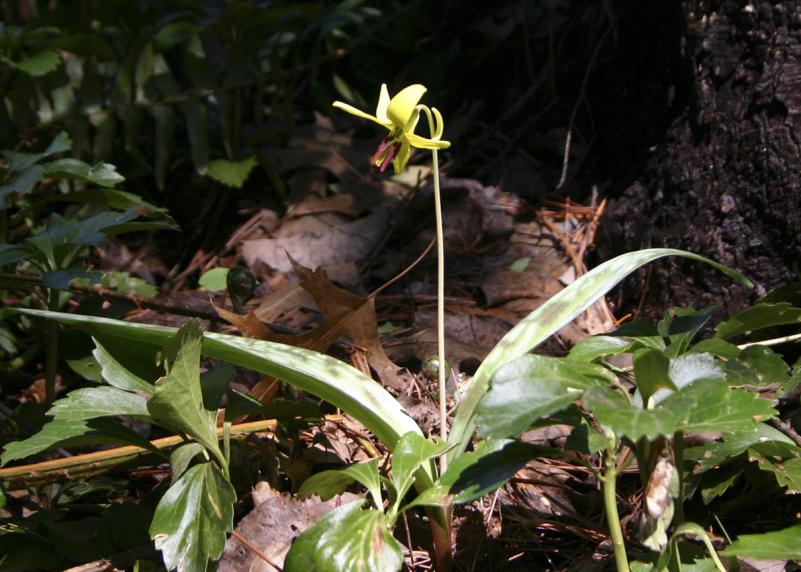 I love planting daffodils. It is so satisfying to tuck away next spring’s promise in the fall as the days grow short and the soil cools. Horticultural bulbs are raised in fertile beds and are thus prepared to have all of the food and nutrients they need and all of their structures pre-grown, ready to expand into action with rising temperatures in the spring. Wild bulbs, tubers, rhizomes and corms, too, spend the winter growing roots, expanding, duplicating and, in some cases, sending up shoots to just below the frost line or even up into the snow pack. When I plant spring ephemerals, then, I try to be careful to get them at the right depth, where it will stay warmer, keeping in mind that most wild bulbs are found quite deep.

While I do this, I often find myself wondering: While garden flowers have humans to do the planting, who plants wild bulbs and tubers? Squirrels? Elves? The real answer is even better — the bulbs do it themselves!

This is not a recent discovery. The Greek philosopher and scientist Theophrastus, writing in about 300 BCE, first described the phenomenon of plant stems and bulbs moving down in the soil. In the 19th century, botanists first wrote about something they called contractile roots. These roots grow out of a bulb or corm and head downwards guided by gravity. At some point, the roots shorten at the end nearest the bulb, and the bulb is pulled downwards into the ground because the far ends of the roots are anchored in deeper soil. These roots then die and decay and new contractile roots grow out, like a relay race. Even in fairly loose humus-rich forest soils, one might suspect that moving an entire bulb downwards would require considerable force. But remember that tree roots routinely destroy sidewalks and bicycle paths — there is plenty of pressure in plant cells. What’s more, bulbs don’t move that fast. Experiments with Easter lilies have shown that each flush of contractile roots can move the bulb down about half an inch, over a period of two weeks — about 0.27 mm per day. That’s slow, but sure! In fact, crocus bulbs have been reported to move downwards a total of 6 inches and Astoma (a wild carrot relative from the Mideast) 10 inches or more. So next time you go to dig up and divide your flowering bulbs and you can’t find them, don’t assume they have been eaten — dig deeper!

The Easter lily experiment revealed another surprise. The bulbs that started out closer to the surface moved farther down over the time of the study than the bulbs that started out deeper. It seems that the bulbs can sense how deep they are. Of course this makes some sense — it would seem likely that there is a more or less best depth for a given species and site. Some plants can even move up by growth and down by contractile roots, gaining some sort of ideal depth. But how in the world do they determine where they are? We don’t really know. Plants can be extremely light-sensitive, but how deep does light penetrate through soil? Not very far. Yet contractile root activity in the Easter lilies was greatly increased by exposure to blue light.

Apparently not. One reason I enjoy studying plants so much is that so many different mechanisms have evolved to “solve” similar problems. Adder’s tongue (also known as dog-toothed violet or trout lily) has another delightful trick. Trout lilies form large clonal colonies on the forest floor, made up mainly of one-leaved sterile shoots. Occasionally, two-leaved shoots appear and these flower, producing seed carried off by ants and other insects that eat the tasty covering around the seed and discard the seed itself.

Most plants in a trout lily colony have been produced on the end of underground stems called stolons. Often these stolons take the form of “droppers,” stems that reverse their usual response to gravity, acting more like roots and head down to a uniform depth where the bud at the tip of the stolon swells and stays short, forming a new corm, planted and ready to send up a new shoot the new winter. Again, how do they sense how deep they are? We still have a lot to learn. Clearly, there is a lot more to spring flowers than meets the eye!

Lawrence J. Winship, a member of the Hitchcock Center board, is a professor of botany in the School of Natural Science and director of the Southwest Studies Program at Hampshire College.