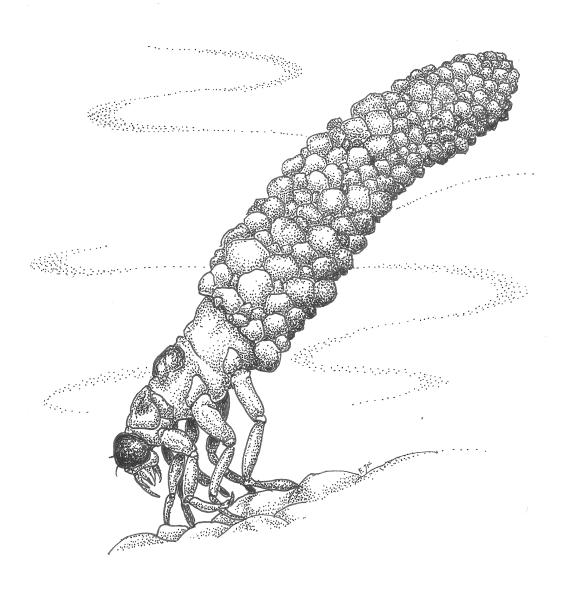 The caddisfly, less than 1/4 inch long, knits together sand grains with silk to fashion a cozy mobile home. DRAWING BY ELIZABETH FARNSWORTH

As summer winds down, I find myself reflecting on the highways bustling with Winnebagos, camper vans, motor homes and silver, sleek, retro Airstream trailers.

I’ve always been impressed with these portable abodes — how they can afford all the comforts of home on four wheels. Who says you can’t take it all with you? Well, humans aren’t the only creatures who carry their homes along for the ride. Among nature’s most amazing architects are some of our tiniest insects: the caddisflies.

What the heck is a caddisfly? It’s actually not a “fly” at all; it’s more closely related to a moth. These small, aquatic insects have moth-like wings, except they are covered with tiny hairs rather than scales. They belong to the insect order Tricoptera, which translates from the Greek words for “hair” and “wing.” Some 12,000 species of caddisflies have been described, from many different wet places: vernal pools, rivers, seeps and ponds. The easiest way to find a caddisfly is to wade into the shallows of a clear, fast-moving stream, pick up stones, and turn them over. You’ll soon notice tiny piles or trails of sand grains that don’t wash or rub off, but are affixed to the rock’s surface. Wait patiently, and a tiny, worm-like creature might emerge from one end, quietly yelling at you in caddisfly-speak to put my rock back! Their common name, “caddis”-fly, derives from a 17th century word for “larva,” which is apt, since most species spend the majority of their lifetimes in this immature stage. The larvae exude silk fibers from their salivary glands, which they use, much like spiders, to attach to surfaces. Some caddisflies spin elaborate, bucket-shaped balloon traps that filter water and capture tiny algae, plankton, diatoms and fine nutrient-rich particles.

Others erect silken tents or cylindrical bivouacs through which the water passes.

The most amazing thing about this diverse group is the variety of tiny, portable houses they build; the characteristic materials and shapes of their shelters are some of the most reliable ways to tell the myriad species apart. The caddisflies easiest to spot use their silk as glue to fasten tiny stones, spruce needles, bits of grassor leaf fragments together, forming a tube in which the larva can live while roaming the river for food or simply waiting for food to come to it. These marvelous edifices provide camouflage and protection from aquatic predators and a peaceful retreat from the rapids. Caddisfly homes expand as they do, often becoming larger at the front end as the larva grows and adds more material. The back end of the tube is also open, allowing waste to exit and oxygen-rich water to flow in and bathe the larva’s gills.

These homes assume every imaginable shape. Some look like tiny chimneys, with four sides painstakingly built of plant fibers. Others resemble the Sydney Opera House, with overlapping shields of carefully selected, squarish leaf bits. Others look like drinking straws and still others look like tangled masses of spiky grass built by a true slob. A few caddisfly species create meandering tubes across a rock’s surface, reminiscent of a mole trail in your lawn. Perhaps the most striking structures are coils of woven sand grains, wrapped into a spiral like a snail’s shell. The smallest mobile homes are less than 3 mm (1/8 inch) long; the largest in our area can reach 60 mm (2½ inches) long.

A caddisfly larva passes through several growth phases, known as instars, before it makes a final shelter in which it can pupate. (The pupa is the stage between larva and adult.) Some caddisfly species will have lived footloose and fancy-free, without protection until they are ready to pupate; others will simply redecorate and batten down their existing houses, anchoring them firmly to rocks. Once the pupa metamorphoses into an adult, it will struggle out of its home, making its way to the water’s surface or climbing onto shore. The lives of adults are short and sweet, involving little except mating. Many caddisfly species have adopted a strategy of emerging as adults en masse; their synchronous flights make it easier to encounter a mate.

The emergence of scores of caddisflies is celebrated by a variety of fish, which snap up the suddenly abundant prey. And, up the food chain, human anglers have learned to attract those fish by fashioning lures that resemble adult caddisflies. Anglers also should take joy in the presence of caddisflies for another reason. Most species are quite intolerant of polluted water; thus, their abundance is a reliable indicator of good water quality. What’s good for caddisflies is good for fish — and for us.

Elizabeth Farnsworth is a biologist, educator and illustrator, and a would-be architect who would love to build a home out of silk and sand. She is currently Director of Education at the New England Wild Flower Society in Framingham.

For more information, see “Caddisflies: A Guide to Eastern Species for Anglers and Other Naturalists,” by Thomas Ames (Stackpole Books, 2009).