Can trees help us with climate change?

This past summer, driving back from a family wedding in Montana, I saw thousands of rail cars headed east, fully loaded with Wyoming coal. One particular scene sticks in my mind. An enormous train thundered along beside the interstate highway in front of a wind farm with hundreds of 1.5-megawatt generators stretching to the horizon — our existential dilemma spread out for all to see across what was once buffalo-grazed prairie.

We do have choices for our energy future, and new technologies appear every day if we have the will to adopt them. But what about the 600 gigatonnes of carbon that we’ve already released into the atmosphere by land clearing and fossil fuel burning, activities that have raised atmospheric carbon dioxide (CO2) levels from 280 ppm to over 400 ppm in just a few decades? What do we do about the emissions to come until, and if, we develop a carbon-neutral economy?

A recent article in Science by a group of European scientists offers a new and hopeful take on an idea dating back to 1975 — the trees can do it. Perhaps if we planted enough trees, and let them stand, these original solar-powered CO2 vacuums would clean up the mess we’ve created, or at least remove enough CO2 from the air that the impacts would be substantially reduced.

Using improved satellite images and models for tree growth in different climate zones, the authors estimated that there’s room for 0.9 billion hectares of new trees, which along with existing forests could absorb 205 gigatonnes of carbon, in line with the goal of keeping warming at or below 1.5 degrees Celsius, per the Intergovernmental Panel on Climate Change recommendations. They conclude that “this new quantitative evaluation shows [forest] restoration isn’t just one of our climate change solutions, it is overwhelmingly the top one.”

It’s worth noting that earlier scientific studies claimed much the same thing: The chiefs of the UN Programme on Reducing Emissions from Deforestation and Forest Degradation declared that “forests are a major, requisite front of action in the global fight against catastrophic climate change — thanks to their unparalleled capacity to absorb and store carbon. Forests capture carbon dioxide at a rate equivalent to about one-third the amount released annually by burning fossil fuels. Stopping deforestation and restoring damaged forests, therefore, could provide up to 30 percent of the climate solution.”

As with any scientific studies, however, there are scientists who strongly disagree. They point out that the study greatly overestimates the impact of trees because the authors didn’t take into account the 45 percent of carbon emissions that are already removed by the biosphere and oceans. In addition, land for planting currently takes up carbon, even if not by trees, so the increase from tree planting is further overestimated. These errors, critics say, would account for huge differences in the amount of carbon that new trees could sequester. 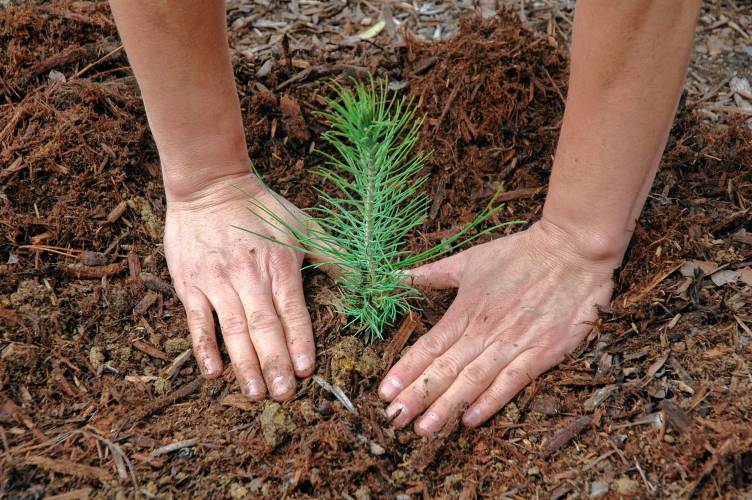 Perhaps if we planted enough trees and let them stand these original solar-powered CO2 vacuums would clean up the mess we’ve created. COURTESY OF U.S. FOREST SERVICE

Other ecologists, including this one, are concerned about how the planting would proceed. Past efforts at reforestation often produced even-aged monocultures that are low in diversity and resilience. Also, reforestation is often a long, difficult process. Aldo Leopold, a skilled conservationist, planted pines every summer on the sand plains of Wisconsin in an effort to restore a forest type that had occupied the region before continuous corn farming depleted soil organic matter and fertility. Only after decades of planting and millions of seedlings were there ultimately enough surviving trees to bring back a sustainable forest.

Then there are the geopolitical complications. The tropics offer the largest potential for CO2 reduction by reforestation. So a problem largely created in the wealthy industrialized nations would be addressed by forcing environmental policy change on the poorer, less developed countries, raising serious questions about environmental justice.

Perhaps a historical point of view conveys my concerns best. Prior to the Industrial Revolution, human population was lower, less focused in cities, and relied almost entirely on non-fossil fuel energy. Carbon dioxide levels were then, and had been for millennia, around 280 ppm. The Earth, her vegetation and her humans, were more or less in steady state. Humans had yet to develop technology that could rapidly modify an ecosystem — we did clear land for farming, but it took time. The CO2 released, even by locally very intense forest clearing and burning, was reabsorbed. So if we now ask our ecosystems to absorb even more CO2 by introducing trillions of trees that in many cases were not there before, we’ll be engaged in a massive bioengineering project. Can we really do this wisely? And in time?

Of course, we should plant trees — rapidly, wisely and extensively, paying close attention to ecological setting and long-term consequences. But we made this mess. It’s critical that we keep as much fossil carbon in the ground as possible, so we don’t have to pass it along to the trees — trees that do so much for us already.