Climate change: A local group takes on a global issue 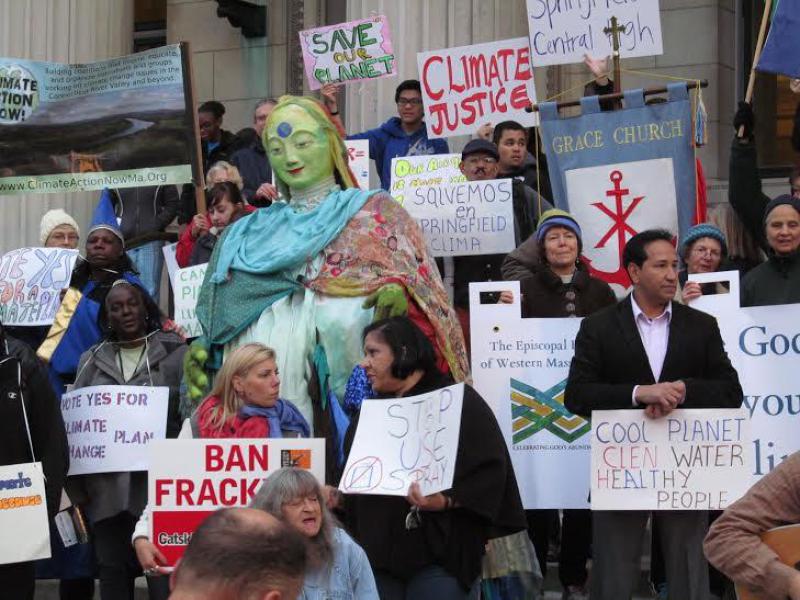 The year 2014 was the warmest ever recorded. Every region of the United States except Hawaii has seen more extreme precipitation episodes in the last 10 years, led by the Northeast with a stunning 71 percent increase.

This past winter’s snowfall records in Boston and elsewhere are consistent with climate predictions that warmer ocean temperatures feed storms with moisture, causing the blizzards and heavy rains we’ve been experiencing.

Whether it’s flooding in the Northeast or drought in the Southwest, climate change is affecting all of us. This is the “new normal.” Although the science has been clear, world leaders have spent the last quarter-century doing little to address the crisis. We now have a small window of time left to prevent climate catastrophe. The U.N. Environment Program says we need to reach “net zero carbon” by century’s end — this will probably require stopping almost all fossil fuel usage worldwide by around 2050. To succeed, we need to start cutting back right now.

One heartening development is the rise of grassroots groups of people across the country and around the world discovering ways to prevent climate chaos and create positive and equitable solutions. The Valley is home to Climate Action NOW (CAN), a diverse grassroots community of people connected by our passion to preserve a livable world and create a more just society. We work to build coalitions that inspire, educate and organize individuals and groups working on climate change issues.

CAN serves as the Pioneer Valley branch of 350 Massachusetts for a Better Future (350Mass), a volunteer-led statewide climate action network. Central to this movement is a call for a drastic and immediate reduction in carbon dioxide (CO2) emissions.

This requires a fundamental global shift in how we produce and use energy. We have our work cut out for us, because we are contending with powerful and wealthy interests, including multinational energy corporations whose profits depend on continuing the extraction and use of fossil fuels.

There’s a place for everyone in this global surge to create meaningful change in the window of time we have left. To be successful, we need as many people as possible to step up.

Here in the Valley there are many vehicles for getting involved:

CAN/350Mass helps organize community efforts for a climate action plan in your town or city to oppose new fossil fuel infrastructure (pipelines or power plants) and to shift town and faith communities’ energy sources to 100% renewable.

A fair price for carbon.
Most economists agree that putting a price on carbon is the best way to reduce the emissions that cause global warming. One path toward this goal is to end fossil fuel subsidies by having our state legislature approve a fair and equitable fee and rebate program. The state legislature is considering two bills to put a price on carbon. The Massachusetts Campaign for a Clean Energy Future — a broad coalition including business, labor, civic and environmental groups — is currently facilitating a statewide dialogue so the best legislation will emerge; CAN is an active participant.

Arts and media.
CAN is looking for people to work on street theater, giant puppets, music and art so we can bring our passion to the streets and public art to our actions. We also need people with media skills to help with our weekly online newsletter, and our presence on the web, in print and on social media.

Climate change is happening, but together we can prevent catastrophe. If you’re ready to get involved, together we CAN make a difference.

Visit climateactionnowma.org for more information about CAN and to sign up for their weekly newsletter, focusing on local news and actions. CAN’s general meetings are held on the fourth Monday of the month; all are welcome.

Visit 350mass.betterfutureproject.org for more information about the statewide organization and to sign up for their weekly newsletter, covering actions across the state.

Susan Théberge is a founder and Steering Committee member of Climate Action NOW! and the Springfield Climate Justice Coalition and is active in 350MASS, serving on the statewide Steering Team and ReNEWable Mass Campaign group.

Darcy DuMont is a retired lawyer and teacher, and is a leader in the state fossil fuel divestment effort.

This is the third in a series of recent Earth Matters columns on climate change. The previous articles appeared online on March 13 and 27, and can be found here.